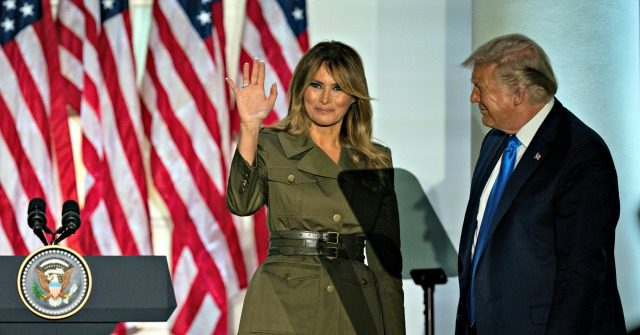 First lady Melania Trump took part in the second night of the Republican National Convention with a speech honoring the American dream, recalling her own story of coming to America.

“We must continue to make sure that women’s voices are heard and that the American dream continues to strive,” Trump said amid a small crowd gathered in the Rose Garden at the White House. She went on to say:

Growing up as a small child in Slovenia, which was under communist rule at that time, I always heard about an amazing place called America, a land that stood for freedom and opportunity. As I grew older, it became my goal to move to the United States and follow my dream of working in the fashion industry.

Prior to discussing her journey to America, the first lady expressed gratitude to her mother and father, attributing her success to them:

My parents worked very hard to ensure our family could not only live and prosper in America but also contribute to a nation that allows for people to arrive with a dream and make it a reality. I want to take a moment to thank my mother and father for all they have done for our family. It is because of you that I am standing here today.

I arrived in the United States when I was 26 years old. Living and working in the land of opportunity was a dream come true but I wanted more. I wanted to be a citizen. After ten years of paperwork and patience, I studied for the test in 2006 and became an American citizen.

“It is still one of the proudest moments in my life because, with hard work and determination, I was able to achieve my own American dream. As an immigrant and a very independent woman, I understand what a privilege it is to live here and enjoy the freedoms and opportunities that we have,” Trump said.

Trump concluded her personal story of immigrating to America by reflecting on the many people she has met in America throughout her time as America’s first lady.

“As first lady, I have been fortunate enough to see the American dream come true over and over again,” Trump continued. “I have met many inspiring women, children, parents, and families that have overcome life-changing issues, which includes addiction, homelessness, family members who are ill or have passed away, and many other challenges that would make most people give up.”