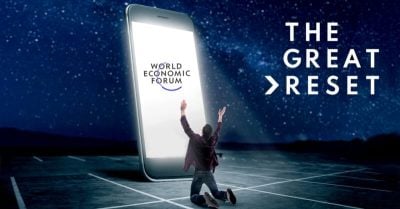 Medical ethics is a large field of study. The Covid pandemic certainly brought many medical ethics issues to the forefront and produced rather amazing “ethicist” gems, such as this:

Be aware that “bioethics” has moved on to proposals that might seem crazy to you but are considered seriously and published in Bill Gates-funded publications and scientific journals. Important studies on this subject are conducted under the auspices of the World Economic Forum.

It was published in Bill Gates-funded The Conversation and is discussed widely in scientific literature. (The Conversation received 7 million dollars from Bill Gates but pretends to be an independent journalism publication) 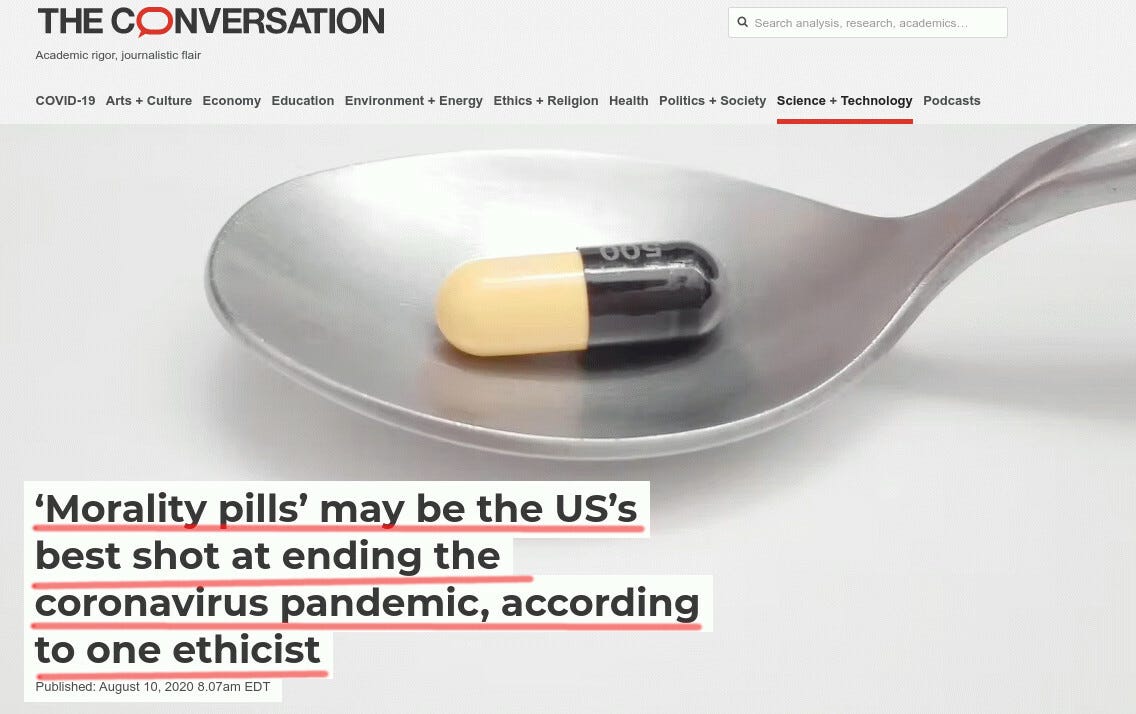 What are these morality pills? You might think that morality, to them, means being a good husband or wife, an honest businessperson, fulfilling promises, and so on. Why not enhance that? What’s the problem?

The problem is that this is NOT how they define morality! To them, morality is a collectivist mindset, lack of critical thinking, and compliance. The article explains that some people lack “moral qualities” and refuse to wear masks or take Covid vaccines, or even deny climate change:

My research in bioethics focuses on questions like how to induce those who are noncooperative to get on board with doing what’s best for the public good. To me, it seems the problem of coronavirus defectors could be solved by moral enhancement: like receiving a vaccine to beef up your immune system, people could take a substance to boost their cooperative, pro-social behavior. Could a psychoactive pill be the solution to the pandemic?

But a strategy like this one could be a way out of this pandemic, a future outbreak or the suffering associated with climate change. That’s why we should be thinking of it now.

The proposed solution to give people morality pills is more than idle thinking. Several candidate psychoactive substances are identified and considered seriously: psilocybin and oxytocin, for example.

The obvious objection to all this morality pill talk is that skeptics would not take them! I would not take such a pill to enhance my collectivist mindset. At the risk of being presumptuous, I would say that you, my dear subscriber, would refuse them also. Right?

The ethicists have a solution: administer collectivist morality pills by force or surreptitiously.

As some have argued, a solution would be to make moral enhancement compulsory or administer it secretly, perhaps via the water supply. These actions require weighing other values. Does the good of covertly dosing the public with a drug that would change people’s behavior outweigh individuals’ autonomy to choose whether to participate? Does the good associated with wearing a mask outweigh an individual’s autonomy to not wear one?

Serious articles discuss how to do it: 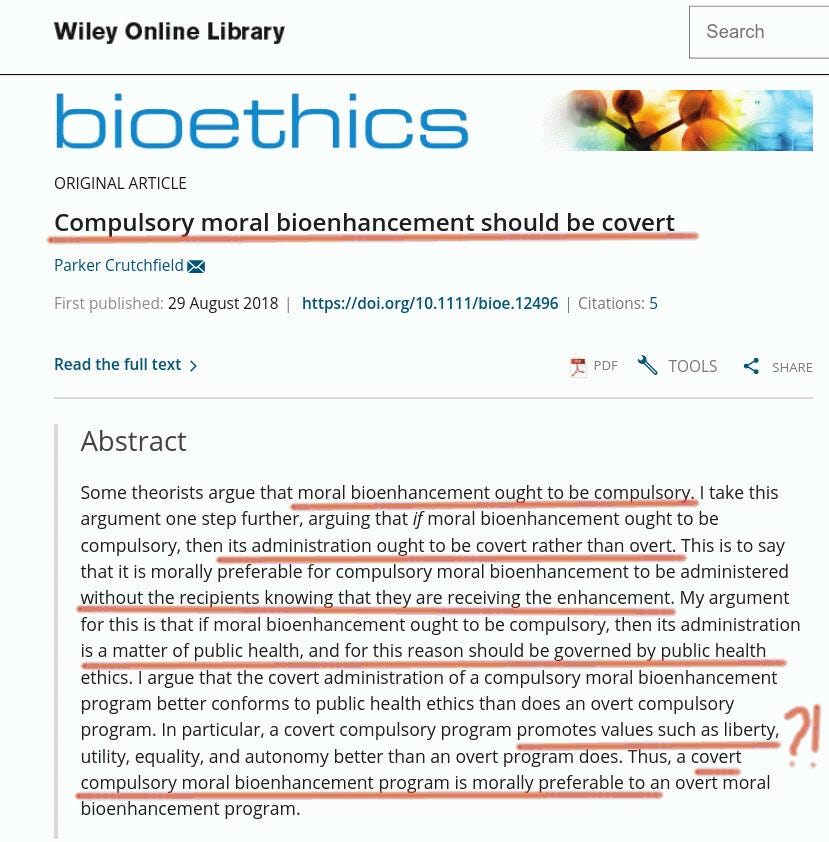 A covert psychoactive substance administration to the masses must not be discussed publicly before its implementation, right? So the ethicists desire to bypass any democratic process or prior public discussion and scrutiny. These ethicists refuse to see an ethical problem with that!

Some of you, my dear readers, might think this is so batshit crazy that it is simply useless musings of fringe philosophers, not worth discussing.

Quite to the contrary, the famous and influential organization called the World Economic Forum sponsors such bioenhancement research. 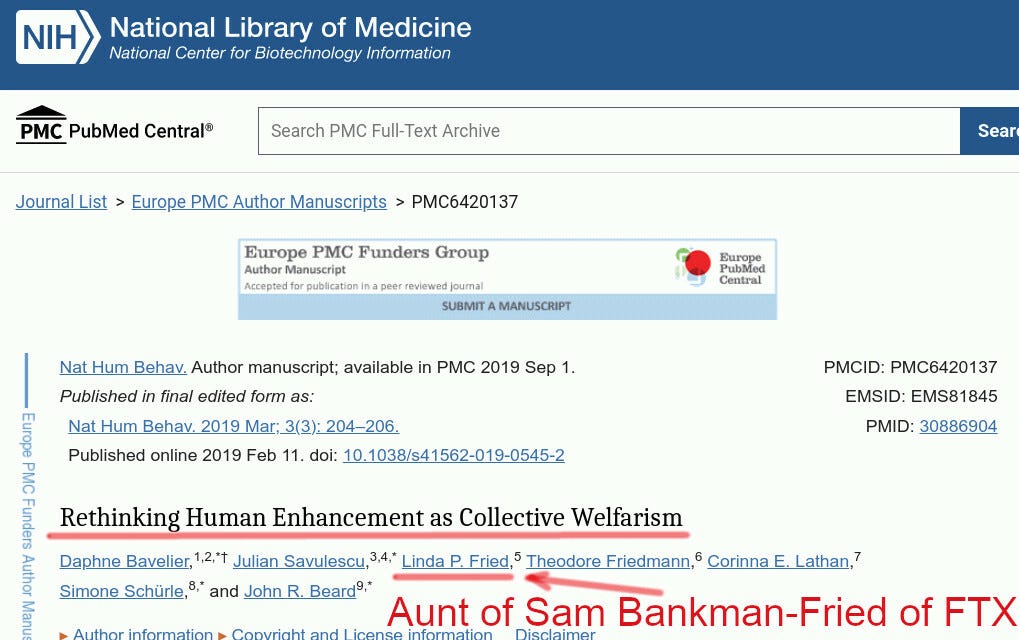 Linda Fried, mentioned above, is the aunt of Sam Bankman-Fried. Sam stole billions of dollars from crypto-investors (in my opinion) and used that money to become the second largest Democratic party donor. So, Linda Fried is not exactly a nobody languishing in obscurity. By the way, a friend of this blog El Gato wrote a great post discussing Sam — check it out.

Linda explains in her article that her goal is “collective welfarism,” and she is part of the group convened by the World Economic Forum:

Those “medical ethicists,” “world changers,” and “disinformation fighters” are so self-absorbed and self-righteous that they think their way of thinking is the only right way. They consider any deviation from their mindset to be antisocial, divisive, and subversive.

To them, freedom is dangerous. Truth is misinformation. Pursuing personal happiness and liberty instead of welfarism is selfish and immoral and needs to be dealt with through covert bioenhancement pills. Their opponents need to be silenced as “disinformation agents” or influenced via secretly applied substances to enhance compliance and lower critical thinking.

My post, discussing outlandish agenda developed under the auspices of the World Economic Forum, may sound like the perfect conspiracy theory. If someone approached me and told me that the WEF is sponsoring “bioenhancement research,” whose goal is to develop substances to impose “collective welfarism” and achieve compliance with mass vaccination, I would not take that person seriously!

Such is the problem with describing many WEF proposals. Some of their ideas are so crazy that they are difficult to accept as genuine when retold. Official papers, proposals, peer-reviewed studies, and agenda articles describe plans that are extremely strange to the uninitiated — and yet are pursued seriously. Other authors, such as Tessa Lena, also mentioned how difficult it is to describe these tendencies.

I explained my difficulties with describing crazy but real proposals by world-leading unelected organizations such as the WEF.

Their proposals, when understood properly, are highly disturbing and seem unreal — except that they are very serious.

The difficulty with their plans is that regular people cannot believe they are real. That happens for a good reason: nobody would expect such insanity to be seriously promulgated by important men and women. Even I have difficulty reconciling the plain text and the simple meaning of their anti-human theories with my idea of what our leaders should act like.

And yet, here we are — the welfarist pills are promulgated under the auspices of the WEF by no one but Linda Fried, the aunt of the second-largest Democrat donor and crypto thief (in my opinion) Sam Bankman-Fried.

In the future, you may need to be careful with your drinking water or the compulsory mystery “health enhancement pill” you must take for an unexplained reason!

Would you take such a welfarism bioenhancement pill? 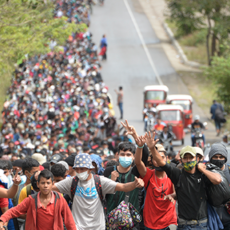 Obama Official: More Than One Million Migrants to Hit Border This Year 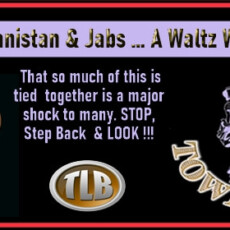 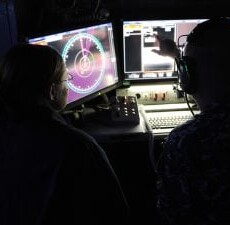