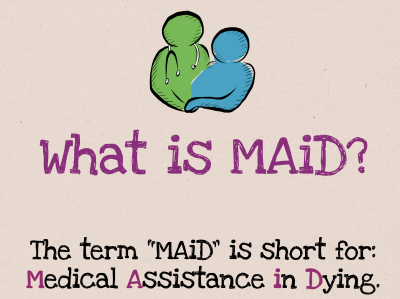 The corporate media has an established track record of promoting suicide as a solution to climate change, among other trendy political problems.

Social engineers euphemistically rebrand state-facilitated suicide as “medical assistance in dying” (MAID). The Canadian government even produces educational “activity books” to indoctrinate children into the new paradigm early, like this one by Canadian Virtual Hospice: 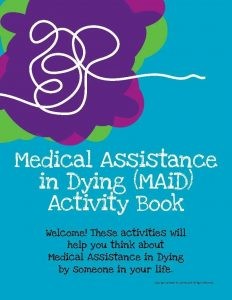 Proponents of the practice frame state-facilitated suicide as a peculiar form of self-empowerment, taking back the right to end your life on your own terms rather than “someone else”:

“From early-adopting Switzerland to latest-to-the-table Australia, more and more countries are legalising the practice. It is now available to over 280 million people in 11 countries around the world. It was on offer to my mother, who recently (and gratefully) used Canada’s legislation to orchestrate her own wise demise…  If we don’t claim the design of our own deaths, it’s likely someone else will…”

All social engineering programs are slippery slopes, moving predictably from the most reasonable and appealing arguments based on rationality to the most extreme, ideologically driven ones.

In this case, the more reasonable government suicide argument starts with older adults nearing the end of their life, in unbearable physical anguish due to one illness or another. That’s how it’s initially sold.

Then, in 2021, Bill C-7 amended the Canadian Criminal Code to “repeal the provision that a person’s natural death be reasonably foreseeable in order for them to be eligible for MAID.” Accordingly, the parameters under which a patient can legally request that the state kill them expanded to include mental illness.

The “kill yourself because you’re depressed” narrative is a tacit acknowledgment of the failure of the psychiatric profession.

Since the 80s, the medical industry pumped “antidepressant” selective serotonin reuptake inhibitors into tens of millions of Americans’ bloodstreams. The entire pharmacological premise of these drugs, that depression is caused by neurochemical imbalance, has been recently debunked. They made billions while depression worsened.

Then we have “anti-anxiety” benzodiazepines like Valium and Xanax that actually just take a neurochemical shotgun to your brain and render you an emotional zombie for 10 hours. Those didn’t work to improve long-term mental health outcomes either.

So they now throw their hands up: “Fuck it, just kill yourself.”

This is not theoretical. The Belgian government already killed an otherwise physically healthy 23-year-old on mental health grounds this year:

“A 23-year woman who had survived a terror attack when she was a teenager has died after she chose to be euthanised… Though Shanti escaped the explosion physically unscathed, mentally she suffered every day since… Shanti sought help from a psychiatric facility in her home town of Antwerp and was even put on anti-depressant medications. However, the psychological trauma was too heavy and she attempted suicide twice; once in 2018 and once in 2020. Finally, in May of this year, she opted to be euthanised.”

Now, having crossed the mental health frontier, as it was destined to from the start, the agenda moves to the Holy Grail: killing children. So we arrive at the Canadian Paediatric Society’s (fittingly acronymized as CPS) treatise on the topic, “Medical Assistance in Dying: A Paediatric Perspective“:

“Ensuring that newborns, children and youth receive the highest possible standard of care as they are dying is a privilege and a responsibility for physicians and allied professionals. Bringing a thoughtful, respectful and personal approach to every end-of-life situation is an essential and evolving duty of care, and the process should meet each patient’s (and family’s) unique social, cultural and spiritual needs.”

So the medical system gets official permission from the Public Health© authorities (the CPS being the foremost authority on children’s medicine) to kill children… as long their decision-making is “respectful” towards “social, cultural, and spiritual needs.”

The Canadian Paediatric Society refers to the children it aims to mercy-kill as “mature minors,” an Orwellian term apparently intended to convey that they are intellectually developed enough to decide to kill themselves:

But already, the CPS is opening the door to kill children of all ages, citing “the need to examine requests for and attitudes around MAID for minors of all ages.”

“Canadian health care professionals are increasingly being approached by the parents of ‘never-competent’ infants and children, including those too young to make a reasoned decision, and by youth themselves, to discuss MAID-related issues. Results from a Canadian Paediatric Surveillance Program (CPSP) survey, discussed below, indicate that parents raise such questions with paediatricians more often than do minors…

In the foreseeable future, parents may challenge health care decisions in court on the grounds that continued life, as experienced by their dying or profoundly disabled child, is not in that child’s best interests.”

(To her credit, at least one high-ranking Canadian official, the minister of disability, has pushed back on the baby-killing proposal – for now.)

The state doesn’t have the functional power, and maybe shouldn’t, to prevent suicide, even though it’s technically illegal. What the state should not be involved in is actively facilitating suicide.

As we’ve seen, inertia will push the state to claim more and more killing power for itself.

Barring effective popular pushback, here’s what’s coming down the pike next: as the designed implosion of Western civilization by a cabal of multinational technocrats (headed by the WEF) picks up speed, resources will dwindle.

There will not be enough water or food to go around, and conflict over access to these precious materials will explode.

Posturing as responsible public administrators, governments will set up advisory boards to decide which people must be spared the traumas of deprivation – for their own good, mind you.

Having determined that death is the most humane outcome, the state will release them of their celestial burden with euthanasia – a mercy killing.

Ben Bartee is an independent Bangkok-based American journalist with opposable thumbs. Follow his stuff via Armageddon Prose and/or Substack, Patreon, Gab, and Twitter.

Featured image is from The Daily Bell 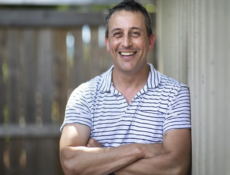 The Face Of Misinformation 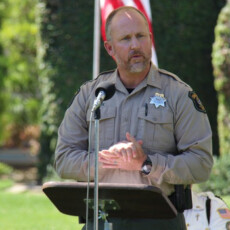 Fast Thinking California Homeowner Blasts Would Be Robber to Smithereens