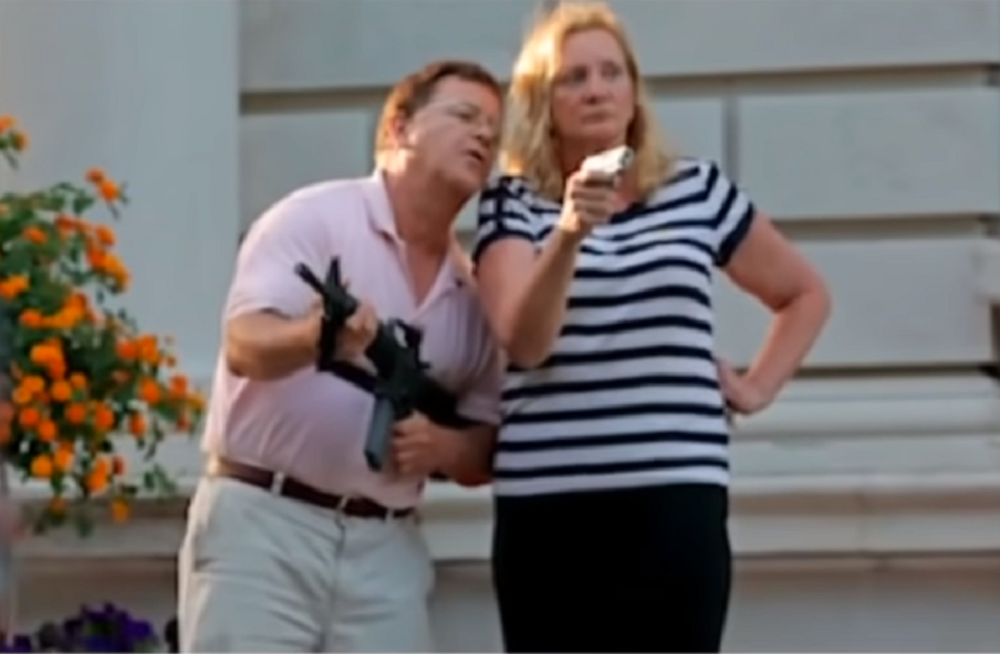 As the recent Mark and Patricia McCloskey case makes clear, using a firearm to defend yourself isn’t the end of your fight. After using a firearm in justified self-defense, even if you don’t shoot it, you may be facing significant legal troubles (and large associated financial costs).

In this article we’re going to explore potential legal and financial liabilities after defensive firearm use, what self-defense legal protection plans are (sometimes called “concealed carry” or “CCW insurance”), and whether they’re a good option for you.

You Have No Rights Without Money For a Lawyer

After seeing the violence occurring nationwide, to include burning buildings and violent attacks, the McCloskeys grabbed firearms and stood at the front of their home to defend themselves and their home against the mob. Thankfully, the mere presence of the firearms was enough to deter an attack and they never needed to shoot their guns. Contrary to what is reported, this is a very common use of, and benefit to, lawful firearm ownership.

However, after they successfully defended themselves from an attack, their fight wasn’t over. Shortly after, a search warrant was executed and their firearms were seized. A couple of weeks later, felony charges were brought against them for their use of firearms.

The McCloskeys feel they were threatened and lawfully displayed their firearms as a deterrent against a violent mob. The prosecutor, however, claimed they waved their “weapons in a threatening manner at those participating in a nonviolent protest.”

Despite feeling they were justified in their actions, this couple is still tangled in legal and political problems. Thursday saw reports of the charges being dropped, however, it is unclear at this point whether they are true.

If the McCloskeys lose their legal battle, they not only risk jail time and a felony record, they also risk losing their livelihood by being disbarred as attorneys and, as felons, never being able to lawfully possess a firearm again. Even if they win, they will be out significant money and time. It is not unheard of for a criminal defense to cost a few hundred thousand dollars.

Additionally, even if the charges are dropped, there is always the risk that one or more of the people in the mob might try to bring a civil lawsuit against them. Had they discharged their firearms and injured or killed someone, a civil lawsuit from the injured person or the deceased person’s relatives is almost a given.

The McCloskeys are clearly in the top 1 percent of income earners and may be able to afford their legal defense without a substantial change in their lives. However, most Americans cannot. The costs of a legal defense can add up quickly.

A legal defense might include posting bail, hiring an attorney on retainer (money up front), hiring experts and private investigators, and paying the ongoing costs of a drawn-out trial. Additionally, at best, you won’t be able to work to earn income during trial. At worst, you won’t be able to work if you’re in jail. This is why many people are looking into “CCW insurance.”

What is ‘CCW Insurance’?

Although it’s technically not “insurance,” that term is a fairly easy way to describe what it does and it is what most people call it. Instead, these services offer financial help to cover their members’ legal defense.

Contrary to what some claim, these plans are not a license to act unlawfully with a firearm. Instead, they are to cover the legal expenses of law-abiding people who have been attacked. Many of them also provide great resources for training and self-defense knowledge.

Recently, I wrote an article comparing and ranking the “best CCW insurance options” wherein I compare and contrast the options of the major providers. There are plenty of differences that are quite difficult to compare.

For example, some offer unlimited coverage for criminal and civil trials, and others place a dollar limit. Some provide money up front, while others will only reimburse after the fact. Although I don’t know your particular situation, I can give you my three “must-haves” for a legal coverage option.

Choose a plan that provides all of the money up-front. Although reimbursement is better than nothing, if you don’t have the few hundred thousand dollars laying around to cover your costs up front, you might still be selling your home, vehicles, and depleting your and your family’s savings.

Choose a plan that allows you to pick your own attorney. You may not know who the best attorney is for your defense right now, but I would never recommend that someone trust his or her freedom to an attorney picked by someone else. You should be able to like your attorney and trust his or her legal defense. If you don’t, you should be able to fire the attorney and choose someone else. All the money in the world paid to an incompetent attorney doesn’t help you.

Should you get ‘Concealed Carry Insurance’?

First, I am a firearms attorney, but I’m not your attorney. So, I’m not giving you legal advice and this decision is purely up to you.

Your decision should involve determining your risk tolerance, your budget, likelihood of needing such coverage, and whether you can absorb the costs of a legal defense without assistance. In a way, this decision is much like your choice to get any insurance.

When discussing coverage, I often hear from people that they don’t want or need it because they are lawful people who responsibly carry a concealed firearm and would never do anything illegal with it. That’s great.

However, much like with the McCloskeys, we won’t be able to decide when we’ll need to defend ourselves. That’s up to whomever decides to attack us. Also, even when we think we’re acting lawfully, charges can still be brought against us. As I say to some of my clients, “being right and winning can still be very expensive.”

When I started my research into these companies, I did not subscribe to any of the plans because I thought, like so many others, that I am a firearms expert, I am a legal expert, I am a relatively big guy, and I am situationally aware and can avoid or handle many situations without my firearm.

It took quite a while to finish my summary of these services because there are so many variables to prevent easy comparisons between the options. In combing through the coverage details and fine print and working to summarize the options plainly, I had convinced myself to purchase a plan from the winner of my comparisons.

Whether you decide to get coverage, and if so, which coverage to get, is up to you. Spending Mindlessly On Ukraine Is A Threat To U.S. National Security