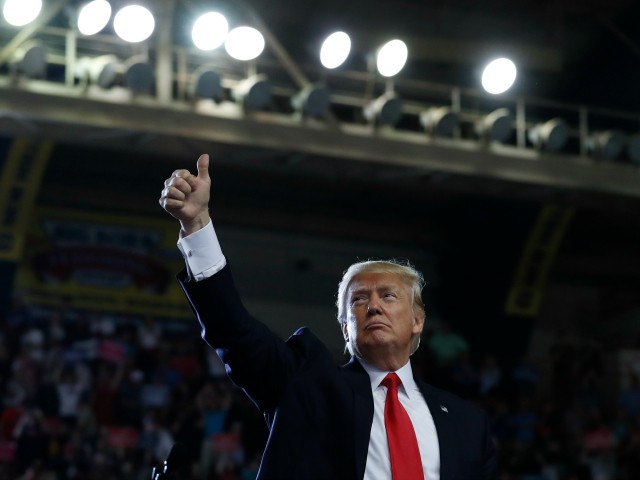 8:50 PM: The most raucous Trump rally since the Coronavirus hit concludes in Latrobe:

8:41 PM: Trump, after vowing to protect George Washington’s name, says as long as you have cancel culture, you need a strong president.

The primary OVERFLOW crowd at the @realDonaldTrump Peaceful Protest in Latrobe, Pennsylvania! pic.twitter.com/31Y40L6NKs

8:40 PM: Trump talks about restoring “patriotic education” and teach our children to love our country, honor our history, and always respect our great American flag.

8:35 PM: Trump says if Pelosi had just apologized, nobody would have been talking about it. He says it is now like the biggest story.

8:32 PM: Trump says America will be the manufacturing super power of the world in the next four year and end its reliance on China. He says if it weren’t for the fake Russia and fake Ukraine scandals, he would have accomplished everything he promised in the first term.

8:28 PM: Trump says Biden opposed the China travel ban. He says Biden got the “worst marks” for his handling of the Swine Flu.

8:21 PM: Trump says most states are opening up except for states like Pennsylvania, North Carolina, and Michigan. He talks about the death,  depression, drugs, job loss, suicides that accompany shut downs. Trump, after saying all the restaurants are closed in New York, asks: “How long can you do this for?”

Trump says everything will open up on November 4–win, lose, or draw. He says they are doing this for political reasons because they want his numbers to look as bad as possible.

8:16 PM: Trump railing against universal mail-in voting. He says even dogs have gotten “unsolicited” ballots. He says the lists are inaccurate and dead people are getting ballots. He says “it’s a disgrace.” Trump says he wants to see the results on November 3.

8:10 PM: Trump now talking about taking back the ISIS Caliphate and killing al-Baghdadi and Iran’s Soleimani. Trump says he kept America out of wars in the Middle East. He says it’s good that he gets along with North Korea’s Kim Jong-Un and Russia. He says the “maniacs” always talk about Russia and never about China. Trump says “Shifty Schiff” is still talking about Russia, Russia.

8:08 PM: Talking about his Middle East peace deal, Trump, who cares about what the elites think about him more than most, name-checks the New York Times‘ Tom Friedman, saying he gave the deal a good review.

8:05 PM: Trump says, during his administration, the border has been the most secure. He talks about ending catch and release and deporting gang members. Trump insists Mexico will be paying for the wall.

8:01 PM: Trump now rips Biden for the Trans-Pacific Partnership deal and supporting China’s entrance into the WTO, which Trump blames for the loss of manufacturing jobs in Western Pennsylvania. He says Biden will not stand up to China’s pillaging and rampaging of Pennsylvania.

“Joe Biden’s agenda is made in China,” Trump says. “Mine is made in America.” Crowd chants “USA! USA!”

Trump talking about someone who must have “issues.”

“Did you ever see a man that likes a mask as much as him?”

Trump says Biden carries a mask during public appearances “because it gives him a sense of security.” He trails off, “If I were a psychiatrist…” pic.twitter.com/GCDmLDWDlm

7:56 PM: Trump says Rep. Conor Lamb (D-PA) is “weak like a lamb” and he likes strong people. Trump continues to rip Utah, saying it is the home of “our worse Senator.”

7:55 PM: Trump claims Romney couldn’t be elected dog-catcher in Utah. He mocks him for marching with Black Lives Matter and says Romney gave him “half a vote” during the impeachment trial.

7:51 PM: Trump says the media are doing whatever they can to “get the sleepy guy into the White House.”

“I don’t think the public is going to fall for it,” he says. Trump says Biden was never known to be a smart Senator and now he is not “prime time.”

7:45 PM: Trump continues to amplify stories about mini-strokes. He keeps talking about it. He now says he has answered more “mean” questions from the “maniacs” than any other president. He mocks Biden for finally taking questions yesterday. He says one questioner was smiling while asking Biden a question. Now he’s back to talking about stories about his “mini-strokes.” Trump says his wife was relieved when Trump told her he didn’t  have a heart attack after, according to him, CNN reported it. Trump says it could happen some day and, if it does, he hopes it works out.

7:42 PM: Trump now ripping the Green New Deal. He says it was drawn up by people “who don’t get it” or don’t like the country.

“Rick Perry! What are you doing here,” Trump says at Pennsylvania hangar rally.

The Texan gave the opening remarks in Latrobe. https://t.co/22fAirXLnH

7:40 PM: Trump claims he is an environmentalists. He says countries like China, India, and Germany need to clean up the environment also or “it doesn’t work.” Trump says the left wants to ban straws and mocks paper straws. Trump asks what about the plates, knives, spoons, and the cartons. He says the paper straws disintegrate and his ties would have “no chance.”

TRUMP: “They want to ban straws. Has anybody ever tried those paper straws? They are not working too good. Right? I said, I have had a couple meals at McDonald’s, etc, over the years. Wendy’s. A friend of mine owns Wendy’s, I will give it a plug. Right? Burger King.” pic.twitter.com/0lNygt7oHM

7:39 PM: Trump says Biden has no control of what is happening. He claims Kennedy lost in Massachusetts because he wasn’t a radical lefty. Trump seems to have some fondness for the Kennedy family.

7:38 PM: Trump now mocks Biden for putting Beto O’Rourke in charge of guns. He now ridicules Beto for saying he was “born” to be president. Trump relishing in his dream job as Pundit-in-Chief.

7:35 PM: Trump says his numbers have been “up, up, up like a rocket” since his Mount Rushmore speech. He says leftists want to “blow it up” and get rid of Mount Rushmore. Crowd boos when Trump says DC Democrats want to take down the monuments in Washington and change the name of the Washington Monument. Trump praises a group of Italians in New York who protected the statue after “forming a little circle.” Trump says the “agitators decided to leave.”

7:32 PM: After referring to “Joe Hiden” (not to be confused with Joe Haden), Trump sounds like he wants to do a MAGA v. KAG poll before losing interest and railing against the Paris Climate Accord.

7:30 PM: Trump bragging about an important endorsement from the boilermakers’ local union.

Citing his support of fossil fuels industries and the jobs they create.

Tremendous endorsement from a labor union in the key battleground state of Pennsylvania.https://t.co/pDzxlhK5oD

7;25 PM: Trump warns Western Pennsylvanians that Biden will make every city look like Portland. He says the rioters chased Portland’s radical-left mayor.  Trump mocks the mayor for being nice to the rioters, saying they only understand one thing–strength.

Trump says Biden’s plan is to appease the “domestic terrorists” while his plan is to arrest and prosecute them.

7:23 PM: Trump says the “rioters” want Biden to win because they want to let rioters out of jail and roam the streets, defund the police, end cash bail, and hire far-left prosecutors and judges who will let the criminals run wild.

Trump says energy bills will triple in Pennsylvania if Biden gets in the White House and ends fracking. Trump says a lot of Crazy Bernie’s voters supported him because of trade. Trump says Biden still doesn’t get trade.

7:20 PM: Trump claims Biden was “silent” all summer while agitators were chanting “death to America.” He mocks Biden for the low attendance at his events. Trump says there was “nobody there” today in Wisconsin.

7:18 PM: Trump tells Western Pennsylvanians that Democrats “will raise your taxes” and “take away your guns.” He’s now railing about the “fake poll” and “fake everything.” He says the “suppression polls” are made to make you feel depressed. He says he has the real polls and he is leading everywhere. He says his base is bigger and the enthusiasm is greater. Trump says if not for the plague from China, he would have canceled the rallies because the election would have been over.

7:15 PM: Trump says “we’re rounding the turn” and years ahead of schedule on a vaccine. Trump says Biden is a puppet of the socialist, marxists, and cop-hating extremists.

President Trump is now at the podium. pic.twitter.com/g1c7OKL1gl

As in NH last week, the Trump campaign is distributing signs that read “This is a Peaceful Protest” and “Peaceful Protester,” a nod to what they claim is a double standard where they’ve been criticized for flouting CDC & local guidelines while protests for racial justice have not pic.twitter.com/ZYNCTnO5oM

7:12 PM: Trump says it’s great to be in Latrobe. He says he’s going to win Pennsylvania in 61 days and four more years in the White House.

MOMENTS AGO: President Trump arrives in Latrobe, PA for a rally. pic.twitter.com/Vgssb5YGjV

7:10 PM: Trump getting ready to speak in the important 2020 battleground state.

The President has arrived. Here’s video of Air Force One landing in Latrobe, PA: pic.twitter.com/CCLn65BrGW

Norma Day, from Greensburg, broke into tears beside me as Air Force One pulled in. “I love president Trump. He’s changing the world,” she said. “It’s gonna be biblical.” pic.twitter.com/tvamDvbDs9

6:45 PM: Trump heading to Arnold Palmer Regional Airport. The King played a round of golf with anyone he potentially wanted to go into business with because he knew golf revealed everything he needed to know about a person.

I’m going to Latrobe, Pennsylvania, the home of the late, great Arnold Palmer – There was nobody like him. I got to know Arnold well, played golf with him, and miss him. See you tonight in Latrobe! pic.twitter.com/reDdJIe4WX

Dark storm clouds in the distance as Air Force One wheels up for airport rally in Latrobe, PA. It’s his 4th visit this year to must-win Pennsylvania. His 16th visit since taking office. Yes, that’s a C32A/757 again serving as AF-1 this trip. pic.twitter.com/h6HJexO2bK

Supporters of President Trump are lined up to take shuttles into Arnold Palmer airport for the president’s arrival tonight at 7pm in Latrobe @TribLIVE pic.twitter.com/yNQxZO92Ow

People waited for hours in line to hopefully get inside to see the president. Doors opened to the public a few moments ago. pic.twitter.com/rMlqebI6Re

President Trump to speak in Latrobe at 7. pic.twitter.com/EbLsaTABjw

Setting the scene: crowds are beginning to file in ahead of President Trump’s rally.

We’ll have updates throughout our newscasts tonight on @KDKA. pic.twitter.com/CBpoujISvQ

The crowd continues to grow at Arnold Palmer Regional Airport ahead of @realDonaldTrump rally scheduled tonight at 7. @KDKA pic.twitter.com/7ZWSKEa0Ix

The setup for President Trump’s address at @PalmerAirport in Latrobe. He’s expected to speak around 7 pm pic.twitter.com/eyEnCnFbPt

TAKE A LOOK AT THIS: Hundreds of people are lined up outside the Arnold Palmer Regional Airport in Latrobe waiting for President Trump to arrive. @WJACTV pic.twitter.com/1nBGKTM6Cl

Trump is visiting Latrobe, PA about an hour away from Pittsburgh tonight. Took a detour to The Trump House on my way to covering it. pic.twitter.com/ZHo9A5clQ2

3.5 hours before Trump’s rally, and with the parking lot already full, here’s the backlog in Latrobe. pic.twitter.com/PKc5sqoiyQ

Why Are Soros And Gates Buying UK ‘VIRUS’ Testing Company?