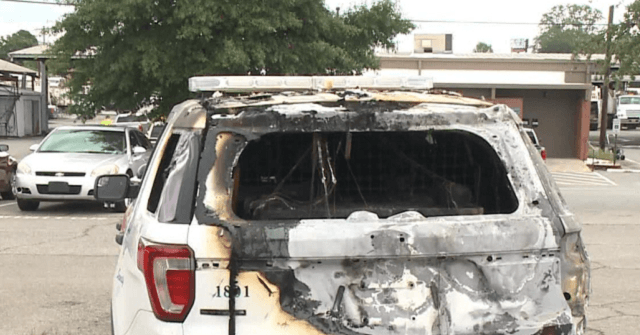 A woman described as a “far-left” journalist and three other activists are charged in the August firebombings of multiple police cars. The alleged arson attacks took place during Black Lives Matter protests in Little Rock, Arkansas.

Federal prosecutors in the Eastern District of Arkansas charged KUAR Public Radio journalist Renea Baek Goddard, 22, and three others in connection to the firebombings of multiple police vehicles in August, according to information obtained from the U.S. Attorney’s Office for the Eastern District of Arkansas. The others charged include Brittany Dawn Jeffrey, 31; Emily Nowlin, 27; and Aline Espinosa-Villegas, 24 — all residents of Little Rock.

Following Black Lives Matter protests outside police stations on August 25 in Little Rock, police found several of their vehicles parked in a fleet parking lot had their tires punctured, prosecutors stated. The officers also found two green bottles with what appeared to be gasoline inside. Prosecutors described the bottles as improvised incendiary devices — Molotov cocktails.

New report: 4 far-left activists have been arrested following ATF investigation into firebombing attacks in Little Rock. Renea Goddard, one of the suspects, is a journalist. Other arrestees include Brittany Jeffrey, Aline Espinosa-Villegas & Emily Nowlin. https://t.co/rc5jTMUKmn

A few days later, the criminal complaint states that vandals struck vehicles parked at the Arkansas State Police lot in Little Rock. Vandals set one vehicle on fire, another was vandalized with spray paint, and several others had punctured tires.

Investigators found a Molotov cocktail made from a brandy bottle inside the burned vehicle.

The complaint states that informants reported Renea Goddard, Emily Nowlin, and Aline Espinosa-Villegas as being responsible for the incidents.

Federal investigators executed search warrants to track the locations of their cell phones. The electronic searches confirmed the suspects being present at the State Police building.

“Today’s arrests send a message that violence targeted toward law enforcement will not be tolerated,” U.S. Attorney Cody Hiland said in a written statement. “Breaking into a police compound and fire bombing a police vehicle with a homemade explosive device is clearly not a peaceful protest. Those who would target law enforcement with violent acts will not do so in the Eastern District of Arkansas without the full resources of the federal government being deployed to assist our state and local partners in bringing those responsible to justice. They will be prosecuted to the fullest extent of the law.”

ATF New Orleans Field Division Special Agent in Charge Kurt Thielhorn added, “We were able to narrow in on particular individuals who we identified responsible for the law enforcement vehicle fires in the Little Rock area. We appreciate the assistance the public was able to provide in order to bring these individuals to justice.”

Prosecutors charged the four suspects with malicious destruction of property belonging to an entity receiving federal funding, conspiracy to commit those acts, and possession of a destructive device.

Prosecutors say that Jeffrey utilized her home as a staging point to build the incendiary devices. She reportedly streamed her arrest on Facebook, Post Millennial journalist Andy Ngo revealed. She reportedly calls herself “your local blactivist” and is said to have organized rallies that shut down local businesses.

She has a previous arrest in July where she is charged with criminal trespassing during a BLM protest at a frozen custard parlor. She was also reportedly arrested in June for disorderly conduct as protesters marched through downtown Little Rock throwing bottles.

The other two suspects also face criminal charges related to the June 2 protest.

Bob Price serves as associate editor and senior news contributor for the Breitbart Texas-Border team. He is an original member of the Breitbart Texas team. Price is a regular panelist on Fox 26 Houston’s Sunday-morning talk show, What’s Your Point? Follow him on Twitter @BobPriceBBTX, Parler @BobPrice, and Facebook.