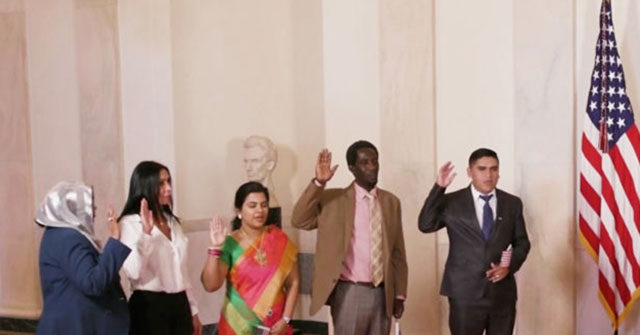 Former Obama administration official Wendy Sherman tweeted that the ceremony was a “horror”:

Go @JoyAnnReid on @MSNBC -terrific riff on the horror of the naturalization ceremony for something so sacred and by an administration that has been so awful to immigrants and asylum seekers. Thank you

Maybe you need to know some naturalized citizens to truly get how disgusting that was.

The Hatch Act is a law designed to separate politics from public service. Those lines are being erased tonight.

The Hatch Act refers to a federal law that prohibits political activities of federal employees while on official duty, and the president’s critics have suggested that the Trump administration is violating the law by hosting RNC events at the White House.

so chad wolf, who is illegally performing the duties of DHS head, broke the law by conducting a naturalization ceremony as part of a partisan event at the White House. do i have that right?

Never Trumper Tom Nichols tweeted, “Another official act performed for a political convention, because the Hatch Act is for chumps”:

Another official act performed for a political convention, because the Hatch Act is for chumps

Former Department of Defense counsel Ryan Goodman called the ceremony a Hatch Act violation that would lay the “groundwork for even more serious violations in the weeks ahead,” referring to the ongoing Justice Department investigations into Obama-era probes into the Trump campaign:

And let’s keep our eyes on the ball:

Normalization of these Hatch Act violations is laying the groundwork for even more serious violations in the weeks ahead — as Barr’s Department of Justice and other agencies may be used to bolster Trump’s re-election campaign. https://t.co/aBUH86Cxrw

Fred Wellman, an adviser to The Lincoln Project, tweeted, “Are you f**king kidding me? They are doing an official naturalization ceremony at the White House as part of their POLITICAL CONVENTION! Not a peep from the spineless GOP. Ethics mean nothing to these assholes.”

The Lincoln Project also bashed first lady Melania Trump’s address from the Rose Garden, calling it a “political speech” at the “People’s House,” describing it as a “sad moment for our country”:

The First Lady of the United States is delivering a political speech at the White House, the People’s House, behind the presidential seal.

This is such a sad moment for our country.

Even before the naturalization ceremony, Trump’s critics raised accusations of Hatch Act violations over reports that the president was considering accepting the Republican presidential nomination from the White House.

However, Washington Post columnist Karen Tumulty — a critic of Trump — wrote that Trump would not be the first president to partake in political activities in the White House, citing former Presidents Jimmy Carter and President Ronald Reagan. She wrote:

With the Republican convention all but canceled because of the covid-19 pandemic, President Trump has been toying with the idea of formally accepting his party’s nomination from the White House — a prospect that has brought howls of outrage from Democrats.

But while Trump has shown little respect for norms, he would not be the first president to use the White House — or even the Oval Office — as the backdrop for a signature campaign event.
In December 1979, Jimmy Carter deemed that a more lavish announcement would not be appropriate amid a crisis in which 50 Americans were being held hostage in Tehran — so he declared that he was running for reelection in a somber nine-minute ceremony in the East Room. ‘As president and as a candidate, I will continue to ask you to join me in looking squarely at the truth,’ he said. ‘Only by facing up to the world as it is can we lift ourselves towards a better future.’

Carter’s campaign even made ads from the Oval Office. In the fall of 1980, during an intense race against former California governor Ronald Reagan, Carter’s campaign broadcast a four-minute spot that showed him in a darkened presidential office. A beam of overhead light angled onto Carter’s face as he warned about the dangers of nuclear war. “In this office, I’ve worked in the arms-control tradition of seven presidents, Democrat and Republican,” he said. “Before you vote, please look carefully into this deep chasm that divides Governor Reagan and myself on this issue.”

Tumulty also wrote that Reagan also used the Oval Office as a backdrop for his reelection announcement on January 29, 1984.

“So would it be all that much of a break with precedent for Trump to accept his party’s nomination somewhere on the White House grounds? I, for one, think the White House makes more sense than anywhere else and would nod to the fact that caution should be keeping everyone at home during the covid-19 pandemic,” she added. 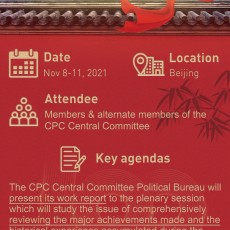 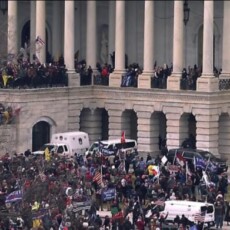