CALIFORNIA — A 70-year-old man pleaded guilty today to illegally donating hundreds of thousands of dollars to the campaigns of eight local politicians that led to the approval of an apartment complex to be built in the Harbor-Gateway area, the Los Angeles County District Attorney’s Office announced.

Samuel Leung entered his plea to one felony count of conspiracy to commit money laundering. He was immediately sentenced to formal probation for five years and must perform 500 hours of community service. He also was ordered to deposit $2.5 million in an escrow account that will remain there until the Los Angeles City Ethics Commission determines the final amount owed.

Leung recruited family members, employees and others to act as straw donors to funnel money to local politicians in hopes of having Leung’s five-acre parcel rezoned from industrial to residential use.

State law prohibits anyone from making a contribution to a political campaign using someone else’s name.

Over a six-year period beginning in 2009, more than $600,000 was contributed by people and companies connected to Leung. The donations went to the campaigns and officeholder accounts of eight Los Angeles area politicians. In exchange, Leung reimbursed many of the donors’ contributions.

The 352-unit Sea Breeze project was eventually approved by the Los Angeles City Council in February 2015.

Co-defendant and Leung’s former secretary Sofia David remains a fugitive. She was charged with one felony count of conspiracy to commit campaign money laundering and faces up to three years in state prison if convicted.

The District Attorney did not identify the candidates who possibly benefited from the crimes. 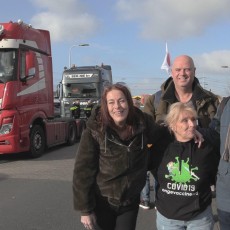 Tucker Carlson: “Love Him or Hate Him, Donald Trump is an Indictment Against The DC Ruling Class”…