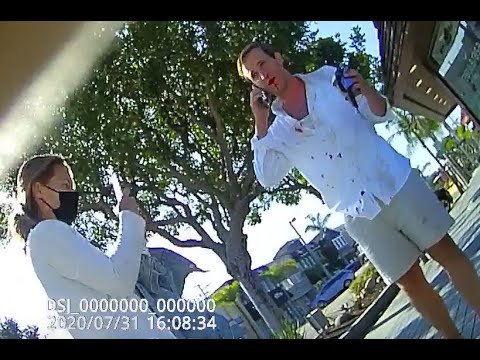 Karen Throws Hot Coffee At Man For Not Wearing a Mask

Video of the incident, originally shared on Reddit, was captured by a body camera worn by the man’s friend and shows the confrontation was initiated by the couple as they walked past the man and his friend as they were about to enjoy a meal on a bench in Manhattan Beach, California.

“Ya’ll need to be wearing masks,” the woman can be heard telling them after noticing they didn’t have their masks on. The friend of the person filming then tells her he can’t eat his burrito with his mask on as the man recording explains to them that they’re “on the other side of the fence” and don’t “believe in this stuff.”

The woman’s husband then starts arguing with the man’s friend. “What are you looking at me for? I didn’t say shit to you. Get the f*ck out of my face!” the man says before the woman douses him with her hot beverage.

“That was dumb,” the man filming can be heard saying as his friend runs over to the husband and lands a few punches on him. The man’s girlfriend tries to intervene and tears the man’s shirt off.

“You shouldn’t have thrown the drink in his face. That was pretty stupid” the man filming tells the woman, who responds with “I don’t give a f*ck. I hope someone saw that. I would do it 10 times over mother*cker.”

According to the Reddit user who posted the video the couple tries telling the cops that the man attacked them “unprovoked,” but his friend presented them with the bodycam and officers made the couple apologize to the men.