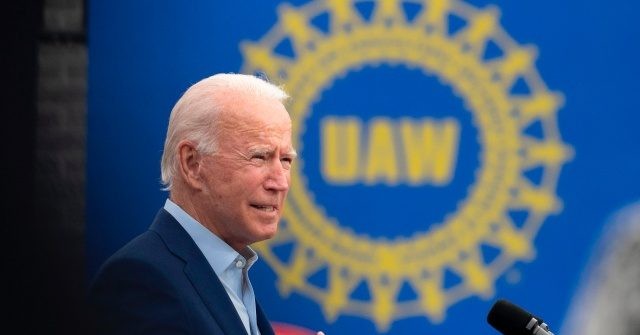 “It’s never a good bet to bet against the American worker,” Biden said in a speech, as he posed in front of American-made pickup trucks.

Biden said his administration will prioritize “consequences for offshoring” and “rewards and incentives” for creating American jobs, mostly through tax penalties and credits.

With a decades-long record on the issue of offshoring, Biden glossed over his past without the most subtle mention of what free trade with Mexico, South Korea, and China has done to the American auto industry.

In the most famous case, highlighted by Breitbart News last year, Biden delivered a speech on the Senate floor in November 1993 supporting the North American Free Trade Agreement (NAFTA). As part of the speech, Biden claimed that NAFTA would help drive up production at Chrysler’s Newark, Delaware plant.

“Chrysler expects to sell 5,000 more cars to Mexico from their Newark, DE, plant by the end of the decade,” Biden said in 1993. “Without NAFTA, Chrysler will have to manufacture more cars in Mexico to meet the requirements of pre-NAFTA laws.”

Years later, in 2007, those American workers at the Newark Chrysler plant were laid off as the plant closed down. At its height, about 5,700 workers were employed there. When the plant closed, around 700 to 1,100 Americans were left without jobs.

In November 1993, Joe Biden declared that American workers at the Chrysler plant in Newark, Delaware would benefit from NAFTA. More than a decade later, those U.S. workers were laid off and the plant was closed. https://t.co/zrtNHfZaFb

Many of the workers blamed the unfair foreign competition they had suffered to free trade agreements like NAFTA, which made it easier for corporations to readily outsource American jobs to Mexico.

“Everybody here is mad, upset, the whole gamut of emotions,” a 15-year employee told the Associated Press at the time. “People feel like they got the carpet yanked from underneath them. They feel like there’s really nothing out there for them after this. The economy is really bad, so it’s a hard thing.”

Ultimately, NAFTA — along with China’s entering the World Trade Organization (WTO) that Biden supported — helped eliminate five million manufacturing jobs from the U.S. economy since 1994. In that period, Michigan lost at least 168,000 manufacturing jobs, or 21.3 percent of all their manufacturing industry.

Biden’s lobbying for free trade agreements did not end when he left the Senate. As vice president, Biden attempted to gather support for a new kind of NATFA, the Trans-Pacific Partnership (TPP). President Trump, on his first week in office, killed the TPP by removing the U.S. from the deal.

In the second term of the Obama administration, Biden touted the TPP as a necessary step for the U.S. in order to counter China. At the same time, auto workers were whipping up opposition to the TPP with union leadership blasting the deal, protests, and reports detailing what the free trade agreement would do to their communities.

A report issued by the AFL-CIO detailed how the TPP would “seriously undermine the future of domestic manufacturing production and employment.” The TPP, they said, would have eliminated at least 330,000 American manufacturing jobs.

As was noted in an initial evaluation of the TPP published in the Wall Street Journal, the combined U.S. trade deficit in manufacturing, including automobiles and auto parts, would increase by $55.8 billion under the TPP. Utilizing the conservative estimate of the Department of Commerce that each $1 billion in trade correlates to 6,000 jobs, the TPP will cost, at a minimum, 330,000 jobs in the manufacturing sector. That estimate does not include the indirect cost in terms of jobs or on wages and living conditions of all the primary and secondary workers who will be negatively affected by the agreement. Indeed, we believe that the job loss potential of the TPP is much higher. [Emphasis added]

The AFL-CIO report stated that there was no “evidence to suggest the TPP will have a positive impact on the U.S. auto industry and domestic employment.”

In December 2015, the United Auto Workers (UAW) lined up in opposition to the TPP:

Sadly, the TPP is counterproductive and undermines the future of domestic manufacturing. Competitive pressures from low wage countries will increase as remaining U.S. tariffs on manufactured goods are eliminated. The Wall Street Journal projects the combined U.S. trade deficit in manufacturing, including autos and auto parts will increase by $55.8 billion under the TPP over the next ten years. The impact will probably be worse. [Emphasis added]

Countries from around the world sell cars in America without unfair trade barriers. The same cannot be said for many countries in the TPP as some import less than 7% while undervaluing their currency, making their exports cheaper. Currency manipulation has already cost millions of American jobs. Vehicles built overseas are routinely well over five thousand dollars cheaper because of undervalued currencies. Unfortunately, enforceable provisions to stop currency manipulation are nowhere to be found. This shortcoming will directly undermine the potential benefits. More consultation will not solve this problem. [Emphasis added]

Despite public opposition, especially from auto workers, Biden said last year that while he would not “rejoin” the TPP, he would “renegotiate” the free trade deal.

“I would not rejoin the [TPP] as it was initially put forward. I would insist that we renegotiate pieces of that with the Pacific nations that we had, in South America and North America, so that we could bring them together to hold China accountable for the rules of — us setting the rules of the road as to how trade should be conducted,” Biden said. “Otherwise, they’re going to do exactly what they’re doing, fill the vacuum and run the table.”