Give Chris Smith from 2GB radio a bouquet of flowers.

Finally, a mainstream media talk show host getting to some of the solutions. Last week I published the article “Australian Professor Thomas Borody: Ivermectin ‘Amazingly Successful’ In Killing Coronavirus”

“An Australian drug known as Ivermectin, which is already in use throughout the world to treat parasitic conditions, is showing great results in killing coronavirus in studies involving patients…”

Our media-watcher commenter Ned alerted me to Chris Smith’s radio broadcast on 2GB last Sunday and that he was interviewing Professor Borody and a woman from Melbourne. The woman’s 94-year-old mother, in aged care, had tested positive and had a nasty cough — and she wanted the doctor to prescribe Ivermectin. The doctor at the age-care facility refused as he was instructed to follow “protocols”.

With the help of Prof Borody, the woman, Monika, found a doctor to prescribe the combination of FDA and TGA approved Ivermectin, Zinc, and Doxycycline to her mother.

Well, Prof Borody and Monika were back on with Chris Smith this morning. I managed to catch the interviews, thanks to Ned.

Monika’s 94-year-old mum has had a dramatic recovery, even though she has other health issues. And she coughed only once during the half-hour “visit” with her daughter and was looking well and smiling.

Prof Borody also seemed most encouraged by the Federal Government’s response saying “they will leave no stone unturned.” But, the Victorian government is yet to respond. Most of the cases in Victoria are of people in their 80s and 90s. And as Monika said, “What have you got to lose?”

Prof Borody said there are several trials underway and it appears the drug has 90 -100% success for early and moderate cases. It is especially effective if started immediately. Consider the 94-year-old in Melbourne. She was already at a precarious stage of Covid before starting Ivermectin.

Dan Andrews, we want you to contact Borody. Today.

The government is keen for vaccine trials to be rushed through — but seem to be dragging their feet with regard to Ivermectin which has been around since 1975 — and considered SAFE.

By the way, Monash University published this:

Really? It is already being used on humans (dummy). While people are dying in Victoria, Monash Uni is essentially advocating that these people not be treated with a proven-safe drug and just die. The Victorian government is not even bothering to call Professor Borody to discuss the trials that he has been doing.

No. It has been proven to work.

Enough is enough. Start saving lives in Victoria, and stop talking about BS vaccines that should be in trials for several years.

The Victorian government seems complicit in corporate espionage to facilitate the wishes of the trillion-dollar vaccine industry at the expense of lives and the well-being of people. 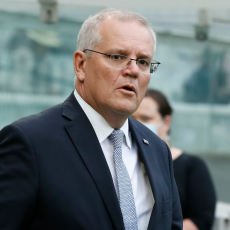 Scott Morrison and the dirt file he gave to Murdoch’s media to win pre-selection in 2007. Starring Sam Dastyari and Senator Fierravanti-Wells

ABC trying to claw back any credibility it may have had by demonising QAnon, but the cat is out of the bag Former Fox News Host Ed Henry Discusses What Fox Tried to Do on Election Night: ‘I Saw That!’