For four days, those tuned into the Democratic National Committee’s virtual convention witnessed a party attempting desperately to masquerade behind a veil of moderation. Standing beneath a figurative banner of “unity,” the DNC paraded across the screen its foremost legacy politicians: former Presidents Barack Obama, Bill Clinton, and Jimmy Carter, as well as presidential wannabes John Kerry and Hillary Clinton.

Democrats hid behind more than their words: They showcased speeches by former Republican governors John Kasich and Christine Whitman, former Republican New York Rep. Susan Molinari, and former Hewlett Packard CEO Meg Whitman, casting these endorsements by left-of-center Republicans as proof of the Democratic Party’s moderation. Colin Powell was also featured, although as after endorsing Democratic presidential candidates for the last several elections, he shouldn’t really be counted as a Republican anymore.

While the DNC showered attention on the Republican crossovers, the party only granted self-described socialist Rep. Alexandria Ocasio-Cortez 60 seconds to share her thoughts, prompting a not-so-subtle rejoinder on Twitter by the young leftist. 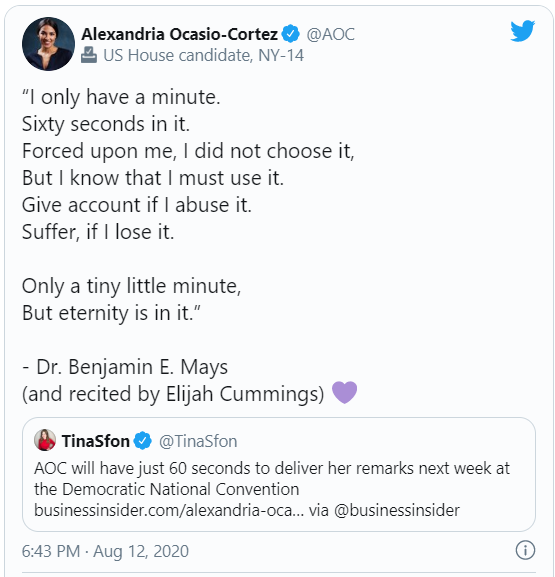 As my colleague Melissa Braunstein noted, also on Twitter:

On this very rare occasion, I agree with AOC. She and the Squad should have more speaking time at the Dem convention. They represent a rising force within their party, where the real energy is. Voters should know and understand that. Biden can feature as many moderate Republicans as he likes this week, but those people won’t have any say over what a Biden administration looks like, personnel, or policy-wise.

If Indy or alienated GOP (who don’t obsessively follow politics) want to understand what government would look like if Dems sweep the White House and both houses of Congress, AOC, the force behind the Green New Deal, is a better clue. AOC + friends have helped shift the Overton Window leftward. Forget the Clinton era. The Biden era Dems would be to the left of Obama. 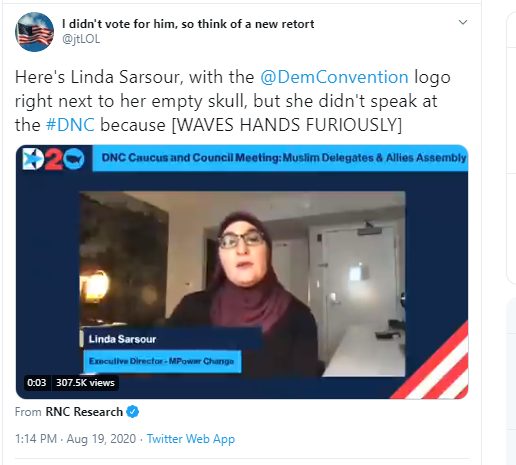 The left-leaning media also knows the modern Democratic Party doesn’t play in Peoria, and that for their preferred candidate to win the neighboring states of Wisconsin, Indiana, and Michigan that went for Trump in 2016, the Biden-Harris ticket must be perceived as reasonable and centrist.

That is why, shortly after Biden announced Kamala Harris as his running mate, the New York Times ran a glowing piece about the California Senator, calling her a “pragmatic moderate.” Harris, of course, is nothing of the sort, having been “rated the 4th most liberal Senator by the non-partisan GovTrack.us website, based on her support for left-wing legislation.”

It isn’t merely Harris’s voting record that unmasks the leftist ticket’s ideological extremism, it is also the Democratic platform on which Biden and Harris are running. Mara Gay, a member of The New York Times editorial board, made that point during an MSNBC segment, telling host Nicolle Wallace, “You know, I think what’s funny is that actually, Biden’s platform is far more liberal than Barack Obama’s was years ago.”

“And so, when we looked at that as an editorial board,” Gay continued, “we were kind of blown away at how much more similar it is to Bernie Sanders’s platform in some ways than Barack Obama in 2008.”

You wouldn’t know it, however, from the week-long performances at the DNC. While the speakers all roundly condemned Donald Trump, including some, such as failed presidential contender Hillary Clinton, with an unhidden vitriol, the policies championed during the convention sounded moderate.

Americans need to realize, however, that for all the play-acting of the past week, the Biden-Harris ticket, both in policy and in person, represents an extreme leftist lurch for the country. That fact does not even account for the reality that Joe Biden would be to the executive what Robert Mueller was to the special counsel’s office: a shell figurehead, controlled by partisan underlings.

Democrats may have succeeded in using the convention to push their message of moderation, but it will be more difficult to hide their true ideology from the masses for much longer — even with a complicit press. 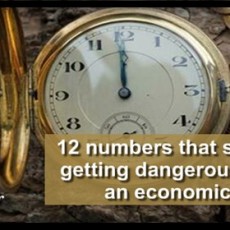 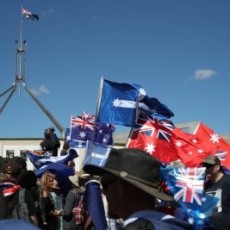 Photo Album of the Canberra Protest against Covid Mandates