Nathan Stall, a former member of the Ontario Science Panel who resigned in August to seek the Ontario Liberal Party nomination for Toronto-St Paul’s made a completely unfounded allegation that he had been attacked in public by a Rebel News journalist.

The now-deleted tweet was up for nearly 6 hours and retweeted hundreds of times. It read:

“Today a Rebel News reporter harassed me at a local farmer’s market for promoting vaccines.

That same reporter made use of the market’s shopping service, where volunteers personally shop inside for those without a vaccine passport.” 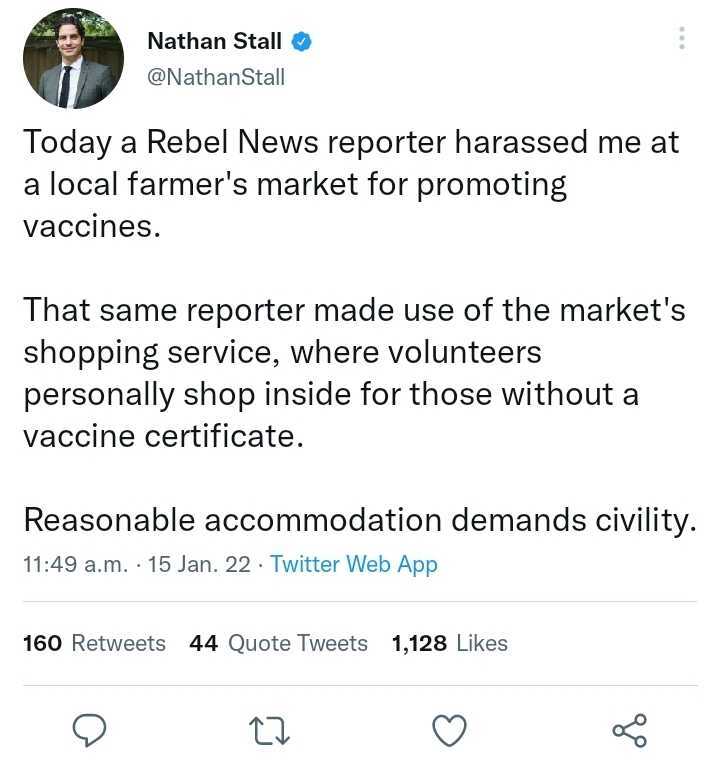 The falsehood was immediately rebuked by Rebel News publisher, Ezra Levant who demanded the tweet be deleted, and an apology issued if Stall wants to avoid a lawsuit.

This is a defamatory lie. It did not happen. I personally checked with every Rebel News staffer today. No-one interacted with you in any way; no-one was at a farmers market, most of my staff have never heard of you. Please delete this falsehood. You untrustworthy liar.

You wicked liar. I have just checked with every single Rebel News staff member. No-one interacted with you today, no-one went to a farmer’s market, and most of my staff have no clue who you are. Retract your defamation and apologize or we’ll sue you on Monday morning. https://t.co/WjIfBvI7GQ

1. Delete your lying tweet;
2. Publish a new tweet retracting your false claim that a “Rebel News reporter” harassed you today; and
3. Apologize for defaming our team.

If you do not do all of these things by Monday morning at 10 a.m., we’ll see you in court.

.@NathanStall you finally deleted your defamatory tweet. But not before thousands of people saw it — and it was retweeted by senior politicians and journalists.

The damage is done. Please retract and apologize — or we’ll go to a judge on Monday.

You should consult a lawyer.

Stall, in a bizarre attempt to defend himself from allegations of Jussie Smollett-style hate-hoaxing, tweeted a 5-month-old video from Rebel reporter, Tamara Ugolini, as proof that the subject of Tamara’s interview, Rosemary Frei was a Rebel reporter. Frei has never worked for Rebel News in any capacity. Stall provided no evidence that Frei, an independent journalist and freelance medical writer with a Masters of Science in molecular biology, had harassed him either.

Those tweets from Stall were also subsequently deleted.

Yeah, your link is to an article where she is interviewed. She’s not the reporter.

Took me literally 30 seconds of research to figure out she claims to be an independent journalist and was interviewed by Rebel News.

Do people even read anymore? Not in Canada, apparently.

Stall’s lying tweet garnered empathetic replies from hundreds of sympathizers who comforted him for his make-believe trauma at the hands of a non-existent Rebel News reporter and was retweeted by Liberal politicians and journalists, including the health reporter at the Globe and Mail, Andre Picard.

Denise Balkinsoon of the govt subsidized publication, The Narwhal, scolded Stall for misinformation, not for his lie, but for calling Rebel journalists “reporters.”

I’m sorry, that’s baloney. In the interest of not promoting misinformation, can you not call them reporters? They are not journalists.

Stall was widely mocked on social media for his lie.

Was she wearing a Trump hat and did she shout ” This is Rebel country” before putting a noose on your neck?

Let me guess, your Subway sandwich made it through the ordeal okay?

Liar. Filthy shameless liar. Our journalists did not do anything to you. https://t.co/3qfbJWT34x

Just like Jussie Smollett, Nathan Stall concocted a media hoax for publicity. It was so stupid it was unraveled in minutes. @NathanStall is a liar who can’t be trusted. Pass it on. pic.twitter.com/3Nb9wxgqOF

You may want to take a minute to read LOL pic.twitter.com/fGVpQi3J7L

Lawyer up crybaby. Just another Liberal bedwetter making things up. Provide evidence or it didn’t happen. Rebel is not going to let up. I would tread carefully.

The internet, as they say, is forever and the tweet lives in on multiple screenshots still being shared on Twitter.

Stay tuned to Rebel News for updates as this story unfolds on Monday when our lawyers are back at work after the weekend.

As parliament cracks down on sexual harassment, Barnaby resorts to fucking the planet instead 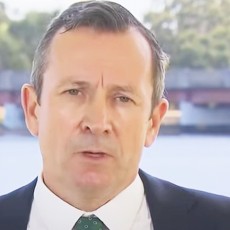 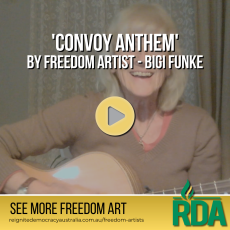