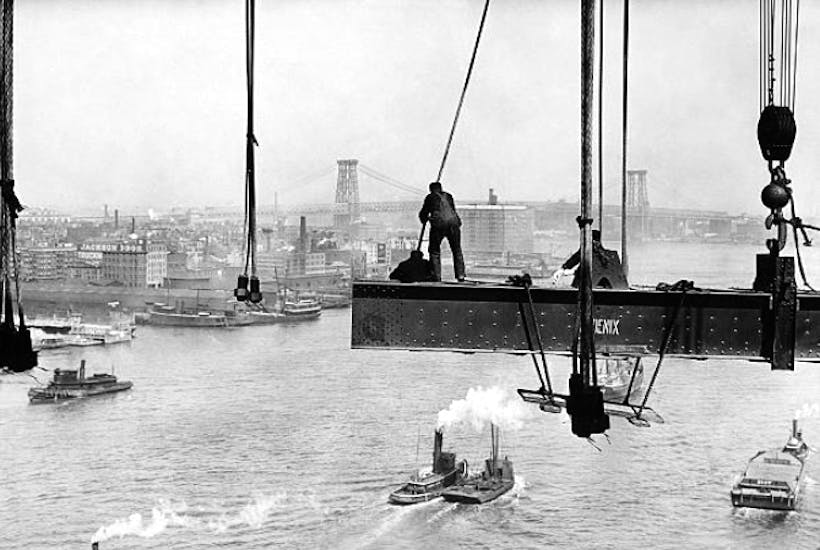 In the 1870s and 80s, the construction of the Brooklyn Bridge was one of the engineering landmarks of the day. In order to install the towers firmly on the riverbed, it was necessary to dig through several feet of silt and sewage to the bedrock beneath. This was before the invention of modern dredging equipment, so engineers used a caisson—a room that is sunk to the bottom of the river and then filled with compressed air so that workers can enter it and dig away the river bed manually.

Working in that caisson must be one of the riskiest jobs ever conducted. One hundred and twenty-five men, sweating away in a hot and humid box, under continuous risk of drowning if an air compressor fails, digging up consolidated muck that releases toxic gases into the atmosphere. Moreover, workers kept getting a mysterious illness they called “caisson sickness”, which shortly came to be known as “the bends”; it resulted from the workers’ blood absorbing excess nitrogen in the pressurised environment, which then bubbled out after returning above ground. It caused 14 deaths on the project.

It is difficult to imagine taking a risk like that at work. And yet, throughout history, taking risks has been an essential and noble part of life. For some it was done to put food on the table, for others, to send the kids to college. At the holistic level, the risk was taken in order to build a bridge, to connect Manhattan Island to Brooklyn and enable the further expansion of New York City. To create a better world.

Risk can be minimised, but it can never be eliminated. The model example of everyday risk is driving a car. You and I drive a car every day, knowing full-well that there is a death toll on our roads. If you, individually, are unhappy with that level of risk, then you may be able to stop driving. But what if everyone stopped driving? How would we feed the cities without trucks? Even individually, if you lock yourself at home, someone else has to drive to deliver food to you. The risk must be taken by someone.

We can reduce the risk of death from car accidents, but if we were to eliminate the risk altogether, we would have to eliminate driving altogether. If we did that, we create a new and worse outcome – death from starvation. Starvation is a ‘trade-off risk’ a risk that increases as another is diminished.

This example demonstrates the reality that there is a minimum level of risk that must be taken across society. Reducing risk will always, eventually create risk. This reality is reflected in the cost of risk reduction.

I have worked for several years in the oil and gas industry, where there is a lot of scrutiny of the risks that are taken, but there is also a lot of money available to address the hazards that exist. Through design validation, risk assessment, standardisation, redundancy, physical protections, procedural protections, and more, we try to minimise the risk of anything going wrong. Even so, we do not target ‘zero’ risk, but rather “ALARP”: As Low As Reasonably Practicable.

Government regulation of hazardous industries in Australia (by SafeWork and other agencies) requires formal risk assessment. In addition to ALARP, they will commonly limit the maximum annual risk of fatality for members of the general public to, for instance, 1 in 100,000. That is, if you are standing outside the fence of a gas facility for a year, the chance of you dying should be less than 1/100,000. That approximates the social norm for public risk in Australia. (Personal risk and occupational risk can be quite a bit higher but, as you can imagine, everyone is required to have a lower risk tolerance when they risk other people’s lives, rather than their own life.)

In the oil and gas industry, there are sufficient funds to absorb the costs of risk assessment and reduction, but in other industries, regulation of risk can be crippling. There’s a reason why so much of our clothes and other products are made overseas. It is not just that the cost of labour is higher, but also that the social risk tolerance is, of necessity, higher. Poorer countries have to tolerate higher risk, because the trade-off risk is also higher—they are closer to the reality of starvation if they don’t take the risk.

Risk is about death. It’s not a fun thought, but a true one – humans are mortal. We have a mortality rate somewhere around 0.6% per year, and a life expectancy of no more than about 83 years. Our best efforts to reduce risk and prolong life will always provide diminishing returns due to the intransigence of these statistics. Whatever cause of death we reduce will only be substituted by another cause of death – old age, if nothing else.

Unfortunately, our cultural trajectory is to oppose risk-taking and ignore death. Where once perhaps we could appreciate sacrifice and the nobility of hard and risky work done for a good cause, where once perhaps we knew the thread of tragedy cannot be unpicked from the fabric of life, now we engage in an incessant blame-game every time something goes wrong.

As a result, our government has begun to conceive of itself as a ‘general bad thing preventer’. We, the people, are the child crying out for mummy at the mere shadow of monsters under the bed, and expect to government to rush in, placate us with words – true or otherwise – and leave the night light on in the hallway. We have been expecting government to eliminate all forms of risk. In reality, it cannot—no one can—but what it can do is underwrite all forms of risk, with money that it takes from us in the first place.

No politician can sound harmful when they speak of making society safer, can they? But that is what makes ‘risk reduction’ one of the best pathways for government to expand its mandate, and gain ever increasing control over our lives, and perhaps even receive applause for doing so.

The risk levels that the government considered acceptable in the pandemic were well below accepted societal norms. We are yet to see the full cost of the risk-minimisation they undertook, and I’m optimistic that we will ride it out. Nevertheless, there was no acknowledgement of trade-offs, of diminishing returns for risk prevention, and of the inevitability of death. We had the experts in the room, but not the adults. It’s not a good trajectory.

Despite the trajectory of our nanny state, our society still owes a lot to people who take risks. The interstate truckers, the miners, the pilots, the front-line workers first on the scene in a crisis. And the deep-sea workers. We no longer use caissons of the kind supporting the Brooklyn Bridge, but we do have saturation divers. Saturation divers live in a hot, pressured habitat within a ship, breathing a modified atmosphere (with Helium—it’s hilarious), for a month at a time. Each day of work they are transferred in a capsule to cold, dark construction worksites on the bottom of the ocean where they weld piping together to connect up oil and gas supplies — so that you and I can keep the lights on.

Nick Kastelein is a Christian and a conservative who grew up and lives in Adelaide where he works for an engineering consultancy. 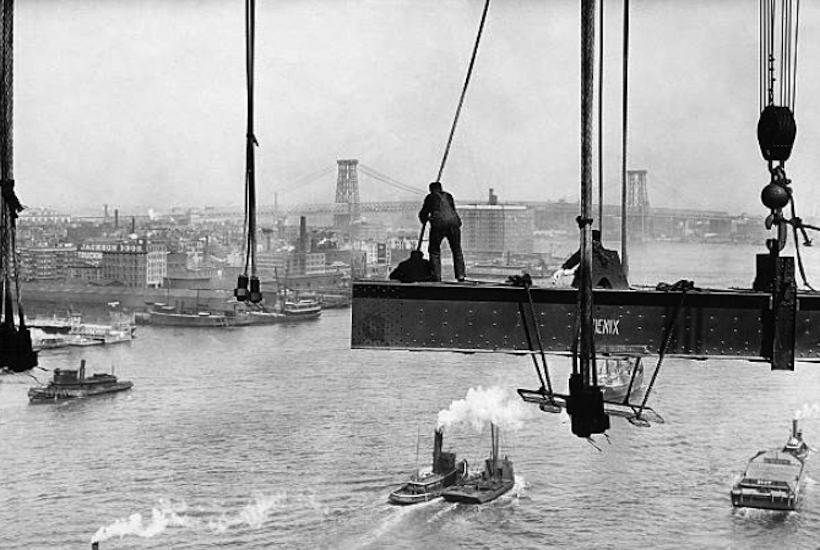 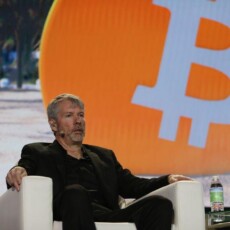 MicroStrategy Adds Almost 9,000 Bitcoins to Its Holdings in Third Quarter