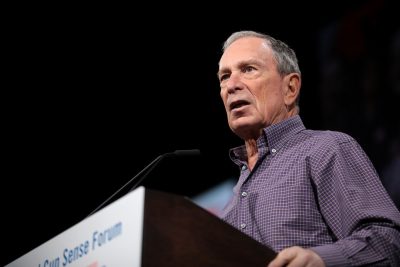 Between November and March, Bloomberg, having a personal net worth of $50 billion, spent more than $1 billion on his failed bid for the Democratic nomination, including about $275 million on ads that criticized Trump. When he endorsed Biden, he announced that he would “work to make him the next President of the United States.” Bloomberg subsequently received a prime speaking slot on the final night of the Democratic convention this year.

Bloomberg made the decision to focus his final election spending on Florida after news reports that Trump had considered spending as much as $100 million of his own money in the final weeks of the campaign.

Though Trump personally contributed $66 million to his 2016 campaign, it would be unprecedented for an incumbent president to put his own money toward winning a second term.

According to a Bloomberg report [2], Trump’s re-election effort, including the Republican National Committee, has spent more than $800 million so far, while Biden and the Democratic National Committee spent about $414 million through July.

But Biden and the DNC raised $365 million in August, shattering a previous record one-month record of $193 million set by Barack Obama in 2008. Biden had $294 million in cash on hand at the end of July, about $6 million less than Trump’s re-election effort.

The principal fault in democracy, as it is practiced all over the world, is the election campaign funding part, because individuals and corporations that finance election campaigns always have ulterior motives: they treat political funding as investments from which they expect to make profits by influencing executive policy and legislation.

In Pakistan’s political system, there are three major structural faults. A representative and democratic political system weeds out corrupt and inept rulers in the long run. But Pakistan’s democracy was derailed by three decade-long martial laws and every time it got back to square one and had to start anew.

Democracy works like the trial-and-error method: politicians who fail to perform are cast aside and those who deliver are retained through election process. A martial law, especially if it is decade-long, gives a new lease of life to the already tried, tested and failed politicians.

The second major fault in Pakistan’s political system is the refusal of mainstream political parties to hold genuine intra-party elections. How can one champion democracy on a national level when one refuses to ensure representation within political parties?

Nevertheless, democracy evolves over time. Instead of losing faith in political system, one must remain engaged in repetitive electoral process, which delivers in the long run through scientifically proven trial-and-error method.

The abovementioned imperfections in democratic system, however, are only Pakistan-specific. Even when we take a look at stable democracies, like India for instance, even their politicians are not representative of the masses, because they work in the interest of moneyed elites rather than for the benefit of the underprivileged masses. This fact begs some further analysis of democracy as it is practiced in the developing world.

Politics is the exclusive prerogative of the ultra-rich in the developing world: the feudal landlords, industrialists and big businesses. The masses and members of the middle class cannot take part in elections, because election campaigns entail huge expenses.

If individual candidates have to spend money from their own pockets on their election campaigns, then how can one expect from such elected representatives that they will not use political office for personal gains in order to raise money for their expensive election campaigns for the next elections?

In the developing countries, politics works like any other commercial enterprise: individual candidates of political parties make an investment on their election campaigns and reap windfalls when they get elected as lawmakers in legislatures or as ministers in cabinets.

But this practice is also subject to abuse, because donors of electoral funds, especially corporations, when they donate money to a particular political party’s election campaign; in return, they demand a say in the policymaking of governments of such political parties. Such governments are beholden to their financiers and hence cannot pursue independent policies in the interests of the masses.

A much better practice for generating election-related funds has been adopted in some developed countries, such as Canada and Germany, where state allocates funds from its national budget for political parties’ election campaigns if they manage to obtain a certain percentage of popular vote in elections.

Although this practice may sound onerous for impoverished developing democracies, if we take a look at all other governance-related expenses, it would appear feasible. Take the cost of maintaining large federal and provincial bureaucracies for instance, paying the salaries of bureaucrats, maintaining federal and provincial public service commissions, and academies etc.

Bureaucracy only constitutes the mid-tier of governance structure; the top-tier is comprised of politicians who formulate state policy. Paying for election-related expenses of political parties would require expenditure from national exchequer only once in four or five years, but its benefits can be enormous, and it would also avoid all the pitfalls of taking contributions from shady individual and corporate donors.

More to the point, in the developed Western democracies, a distinction is generally drawn between power and money. If we take a cursory look at some of the well-known Western politicians, excluding a handful of billionaires like Donald Trump, others like Barack Obama, Bill Clinton, Tony Blair and Francois Hollande were successful lawyers from middle class backgrounds before they were elected as executives of their respective countries. Some Western executives even go back to their previous jobs and private practices once they retire from politics.

The Republican and Democratic parties in the US and the Conservative and Labor parties in the UK accept political contributions which are then spent on the election campaigns of their nominees, which generally are the members of the middle class.

Excluding this year’s US presidential elections, nowhere in the developed and politically evolved West it is expected of individual candidates to spend money from their own pockets on election campaigns, because instead of a political contest, it would then become a contest between the bank accounts of candidates.

Therefore, Western politicians typically are genuine representatives of their electorates, whereas the politicians of the developing world generally belong to the insular and detached elite classes and hence they don’t have much in common with the electorates they are supposed to represent.

Although money does influence politics even in the Western countries, that happens only through indirect means, such as the election campaign financing of political parties, congressional lobbying and advocacy groups etc.

In the developing democracies, like India and Pakistan, however, only the so-called ‘electable’ landowners, industrialists and billionaire businessmen can aspire for political offices due to election campaign-related expenses, and the masses are completely excluded from the entire electoral exercise.

This makes a sheer mockery of democratic process, because how can one expect from wealthy elites to protect the interests of the middle and lower classes? They would obviously enact laws and formulate public policy which would favor the financial interests of their own class without any regard for the interests of disenfranchised masses.

[1] Mike Bloomberg to spend at least $100 million in Florida: