By TONY MOBILIFONITIS
NORTHERN Territory Chief Minister Michael Gunner – stop your filthy pharma-funded war on the indigenous people of the territory you are supposed to be serving!

Once upon a time in the colonial yesteryear it was blackfella poisonings and forced family separations. But this time the poisoning it at the end of a needle, forcibly pumping a dangerous, half-proven mRNA concoction into their bodies in the name of “indigenous health care”. Forced family separations are, of course, “to save them from Covid”.

The indigenous people know it’s genocide and so does the rest of awakened Australia. Gunner and his health bureaucrat friends have sealed their fate. Karma will not be kind to them. Roll up your sleeve Gunner and get your booster shot – a real one that is, not the fake shots preferred by coward politicians.

As reported already by Cairns News, children from 11 upwards are being held against their will and force vaccinated by these teams of health workers supported by police and army personnel approved by the Morrison government. “We’re in a state of emergency. This is a crisis situation here in the Territory – an act of war against our people,” a community woman posted in a video on social media.

She said food supplies were also being withheld from families and Territory child welfare services were “waiting like vultures” to grab the children because of this situation. “So the government has got all these angles stitched up, but the bottom line is that they are vaccinating our people against their will.” She added there were reports of police at Port Keats rounding up people, taking them to the clinic and forcibly vaccinating them.

She said the government had also taken control of communications from these remote communities and it was difficult to confirm information. “There’s a state of emergency here. I’m putting out a cry for help to he world,” she said.

Cutting off food supplies and interference in communications suggests a well-planned military operation designed to intimidate the communities. Cairns News suspects these forced vaccinations are being driven by generous per capita “grants” sponsored from the swill of corrupt Covid dollars floating around government circles.

Gunner and his Labor Party mate Mark McGowan from WA, are drunk on the Covid quarantine powers given to them by Morrison, quarantine powers that constitutionally, are the jurisdiction of the Commonwealth. And Gunner, in the fascist dictator style of Dan Andrews, has targeted these small, impoverished indigenous communities to show us what a “strongman” he is.

Expat Aussie blogger Adam Piggot was on to these “quarantine centres” back in August and has decided to stay offshore to avoid being sent to one on his return home. “The Centre for National Resilience. It sure doesn’t get much more Orwellian than that. This is a name of which Kim Fats in North Korea would be proud. And this prison, for that is what it will be, is for ‘mandatory quarantine accommodation’.”

Meanwhile the poor, isolated indigenous communities of the NT would benefit twice from prescribed ivermectin and hydroxychloroquine – firstly for their regular uses against parasites and malaria and secondly for whatever viruses are moving around under the “Covid” banner. But not for the ignoramus Gunner and the health department mafia currently running the genocide.

Again, the shamefully dishonest and discredited PCR tests (called “gold standard” by the lying TGA chief Skerrit) are being used to ramp up the panic and fear along with the compliant “reporting” by the ABC and legacy media who deceitfully ignored the reports of illegal coercion and forced shots. Instead they focused on Gunner and company rounding up those associated with a so-called case and shipping them off to the quarantine prison farm.

As reported by the ABC, “NT Police Commissioner Jamie Chalker said the four people who escaped hard lockdown in Binjari were found in a public housing block along the highway with seven others this morning. As a result,11 people have now been listed as close contacts and were on their way to the Centre for National Resilience”.

And how exactly were they “on their way to the Centre for National Resilience” at Howard Springs? They were being forcibly taken there. And of course, because they came from the so-called “exposure spots” Binjari and then Katherine, everyone and every place they went near has allegedly been contaminated. It’s the old Covid panic story rolled out again, this time tailored for the NT.

The unluckly 11 had, in Chalker’s words, “wandered to the caravan park” where they caught a taxi “so we’ll have to work… to identify what exposure sites may have been at the caravan park”. And of course the taxi driver was also considered a “close contact”. Oh shock, oh horror. Shut down the entire Territory then. Three of the positive cases are children from the same family. Yeah, grab them too Mr Gunner. What’s that? You already did? Wow what a strongman leader you are Mr G!

So the total number of indigenous people reportedly shipped off to the quarantine prison farm are a child and her mother, two children and their father from Katherine East, the five from Binjari and two from Robinson River – 12 in total.

And the BS and fear-mongering continued unabated across the ABC and TV news channels as they faithfully repeated the NT government’s corona virus website updates while ignoring the Nuremberg 2.0 crimes being perpetrated against the indigenous communities. 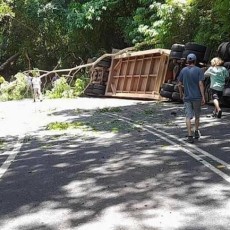 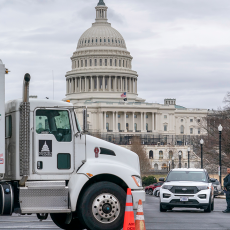 U.S. truckers plan to descend on Washington D.C. in protest convoys ahead of Biden’s State of the Union