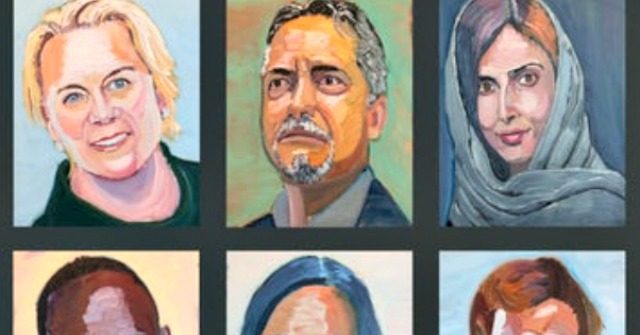 Amateur painter and former President George W. Bush is selling a portrait book of “forty-three individuals who exemplify our proud history as a nation of immigrants.”

The book of portraits is titled, “Out of Many, One,” and it showcases the “people who bring energy, and talent, and faith in the future … may we never forget that immigration is a blessing and a strength,” according to statements from the George. W. Bush Presidential Center.

Bush’s rebuke of the American public comes as polls and debates show that Americans know that legal immigration imposes huge costs on them. But the Bush statement dismissed public opposition to cheap labor migration as “the complications of policy.”

The statements from Bush echo the establishment view that immigration is rocket fuel for investors and for the federal government’s clout in international relations, regardless of the impact on ordinary Americans:

At its core, immigration is a sign of a confident and successful nation. It says something about our country that people all around the world are willing to leave their homes and leave their families and risk everything to come to our country. Their talent and hard work and love of freedom have helped us become the leader of the world. Our generation must ensure that America remains a beacon of liberty and the most hopeful society the world has ever known. We must always be proud to welcome people as fellow Americans. Our new immigrants are just what they’ve always been — people willing to risk everything for the dream of freedom.

Bush’s “Nation of Immigrants” claim was first pushed in the early 1960s when wages were rising rapidly in a popular culture that praised Christian Pilgrims, American settlers, and rugged individualism. But the U.S. government wanted business to have more resources to help win the Cold War. In 2018. Democratic Rep. Joe Kennedy wrote:

Few felt it as deeply as President John F. Kennedy. In his 1964 book A Nation of Immigrants, recently re-released, my great-uncle outlines the compelling case for immigration, in economic, moral, and global terms. “The abundant resources of this land provided the foundation for a great nation,” he writes. “But only people could make the opportunity a reality. Immigration provided the human resources.”

The public response to Bush’s book is mixed:

Oh. That’s why we saw that huge spike in illegal immigration during W’s time in office.

And here I was thinking he just wanted a mass flow of cheap labor.

During his two terms in office, Bush fought for a labor policy that would allow U.S. employers to import cheap foreign workers whenever the employers would not offer free market wages for open jobs. Bush described his “Any Willing Worker” cheap labor plan in 2004, saying:

Out of common sense and fairness, our laws should allow willing workers to enter our country and fill jobs that Americans have are not filling. (Applause.) We must make our immigration laws more rational, and more humane. And I believe we can do so without jeopardizing the livelihoods of American citizens.

Our reforms should be guided by a few basic principles. First, America must control its borders …

Second, new immigration laws should serve the economic needs of our country. If an American employer is offering a job that American citizens are not willing to take, we ought to welcome into our country a person who will fill that job.

In contrast, President Donald Trump promised a popular policy of ‘Hire American.” The goal was sidetracked by the D.C. establishment during the first few years of Trump’s term, but since June 22, he has renewed rhetorical and regulatory efforts to open up jobs for Americans.

George W. Bush’s consistent support for the Fortune 500’s economic agenda wrecked his presidency. It forced his poll ratings down in the 30s as he pushed Congress in 2006 and 2007 to pass cheap labor “comprehensive immigration reform” bills.

Those bills followed the 1990 immigration bill signed by his father, President George H.W. Bush. The 1990 bill doubled immigration, suppressed Americans’ wages, sidelined much of the U.S. tech worker population, turbocharged the Democrats Party’s vote in Virginia, Georgia, Texas, Arizona, and many other states — and turbocharged the U.S. stock market for 30 years.

Bush is still pushing that cheap labor message via his Bush Institute in Texas, under the covers of “effectively manag[ing] the border.” The announcement for his portrait book says:

The Bush Institute believes it is critical to be both a lawful society and a welcoming society at the same time. Since our inception in 2009, we’ve retained a clear-eyed focus on the need for bold, principle-based solutions that comprehensively address the issues and debate around immigration, including how to securely and effectively manage the border.

Every year that passes without reforming our nation’s immigration policy means missed opportunities to ensure the future prosperity, vitality, and security of our country. When immigrants assimilate and advance in our society, they realize their dreams, renew our spirit, and add to the unity of America. The Bush Institute will expand its long-standing policy work on immigration in 2021.

Many polls show that Americans have a two-sided attitude towards migration. Progressives and conservatives hold strong ideological opinions, but a vast swath of non-ideological voters — including Hispanics — want to both welcome some legal immigrants and also to force employers to hire all Americans first.

The polls and debates show that Americans know immigration can damage their wages and salaries, inflate their housing prices, fracture civic trust, slow innovation, slow family formation, and divert opportunities for young Americans — despite the elite pressure to redefine their homeland as a “Nation of Immigrants.”