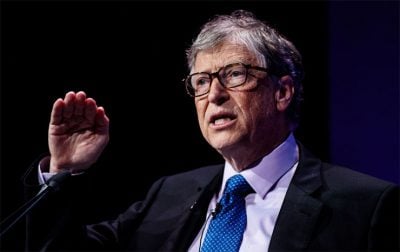 Another Chapter of “Fake Science” is Unfolding.

Say Goodbye to SARS-CoV-2, Say Hello to the Monkeypox Pathogen

In a TV interview with Jeremy Hunt in early November 2021, Bill Gates warned  governments to prepare for simultaneous smallpox terror attacks in 10 airports:

“You say, OK, what if a bioterrorist brought smallpox to 10 airports? You know, how would the world respond to that? There’s naturally-caused epidemics and bioterrorism-caused epidemics that could even be way worse than what we experienced today”, he said (emphasis added)

Compare that to the latest news report on May 19, 2022, more than six months later (emphasis added):

To watch the video interview with Bill Gates click below 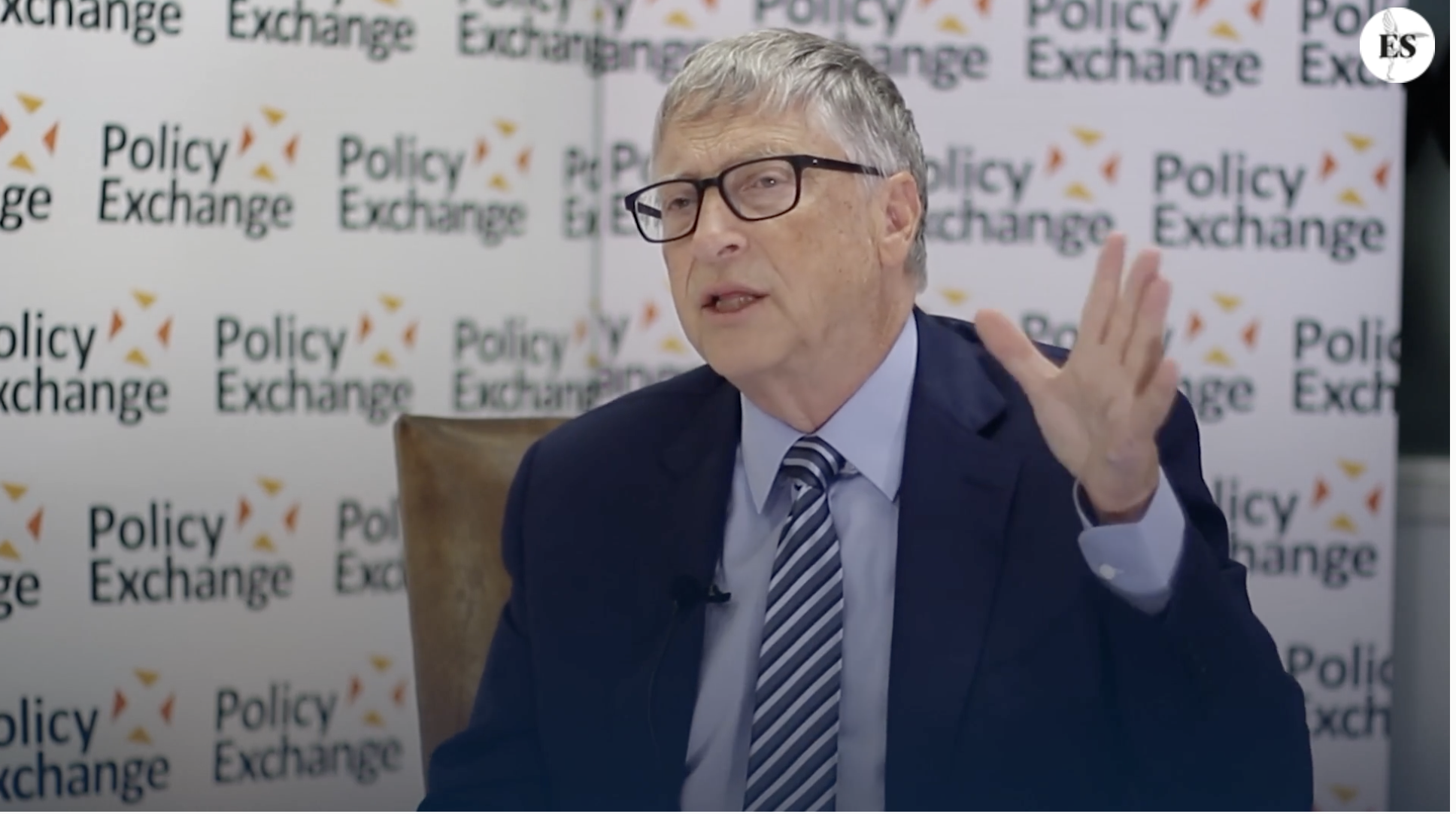 According the Evening Standard (November 4, 2021) Bill Gates warned governments “to prepare for future pandemics and smallpox terror attacks by investing billions in research and development”.

Mr Gates made the warning during a Policy Exchange interview with the chair of the Health Select Committee Jeremy Hunt.

While the research may be expensive, he said that it could also lead to other innovations, such as eradicating flu and the common cold.

He said that countries like the US and the UK must spend “tens of billions” to fund the research.

“I’m hoping in five years, I can write a book called, ‘We ARE ready for the next pandemic’, but it’ll take tens of billions in R&D – the US and the UK will be part of that”, he said.

“It’ll take probably about a billion a year for a pandemic Task Force at the WHO level, which is doing the surveillance and actually doing what I call ‘germ games’ where you practise.” lEWvening SDtandrad ick here to read the full article.

But there is more in the unfolding monkeypox saga which is intent upon triggering and new fear campaign. This was planned well in advance. It started in December 2020. The Timeline is as follow:

December 2020: The Expert Planning of A Tabletop Simulation of a Monkeypox Virus Pandemic

As early as December 2020, a simulation of a monkeypox pandemic had been envisaged by the NTI.

The NTI convened a group of experts to “advise” on the tabletop exercise scenario. Among the experts were senior officials, scientists and experts et al exclusively from U.S. entities including the Department of Homeland Security, USAID, State Department, Defense University, John Hopkins, Harvard T.H. Chan School of Public Health,  Department of Health and Human Services, etc.  (See page 27 of report)

“These experts participated as individuals—not as representatives of their respective organizations—and they do not necessarily endorse the recommendations in this report.”

A few months later following the December 2020 consultations, a Table Top Simulation of a:

“fictional exercise scenario portrayed a deadly, global pandemic involving an unusual strain of monkeypox virus” was held by the NTI at the March 2021 Munich Security Conference:

Strengthening Global Systems to Prevent and Respond to High-Consequence Biological Threats: Results from the 2021 Tabletop Exercise Conducted in Partnership with the Munich Security Conference,

was undertaken by the Global Biological Policy and Programs, of the Nuclear Threat Initiative (NTI). The report summarizes the key findings from the exercise which was generously funded by Open Philanthropy .

It is worth noting that Scenario Simulations of Pandemics were initiated  with Rockefeller’s “Lock Step Scenario” in 2010 which consisted in  the use of “scenario planning” as a means to carry out “global governance”.

In the  Rockefeller’s 2010 Report entitled “Scenarios for the Future of Technology and International Development Area” scenarios of Global Governance and the actions to be taken in the case of a Worldwide pandemic were contemplated.

More specifically, the report envisaged (p 18) the simulation of a Lock Step scenario including a global virulent influenza strain.

The 2010 Rockefeller report was published in the immediate wake of the 2009 H1N1 swine flu pandemic.

Below is the executive summary of the March NTI Simulation (emphasis added) followed by relevant excerpts as well as the list of participants.

It is worth noting that while the December 2020 team which envisaged the simulation project were exclusively from the US focussing on issues of security, the participants of the Table Top Scenario were from Big Pharma, the Gates Foundation, the Wellcome Trust, WHO, UN, as well as representatives from regions the EU, China, Africa.(See list below)

and explored opportunities to improve capabilities to prevent and respond to high-consequence biological events. Participants included 19 senior leaders and experts from across Africa, the Americas, Asia, and Europe with decades of combined experience in public health, biotechnology industry, international security, and philanthropy.

The exercise scenario portrayed a deadly, global pandemic involving an unusual strain of monkeypox virus that emerged in the fictional nation of Brinia and spread globally over 18 months. Ultimately, the exercise scenario revealed that the initial outbreak was caused by a terrorist attack using a pathogen engineered in a laboratory with inadequate biosafety and biosecurity provisions and weak oversight.

By the end of the exercise, the fictional pandemic resulted in more than three billion cases and 270 million fatalities worldwide.

The Nature of the Simulation Borders on Ridicule: “Arnica Terrorists” Attack Brinia

The epidemiological elements of the exercise scenario were developed using a standard Susceptible– Exposed–Infectious–Recovered (SEIR) compartmentalized model. The model assumes no asymptomatic spread. The structure of the model is summarized in Figure B-1. A lab-modified version of monkeypox was intentionally released via aerosols in train stations in the fictional country of Brinia (population 250 million) by agents of a terrorist group operating in neighboring Arnica (population 75 million).

Through intentional modifications made by Arnican virology lab scientists sympathetic with the Arnican terrorists, this monkeypox strain is assumed to be more contagious than naturally occurring monkeypox— with a basic reproductive number (R0) for the modified strain of 3, as compared to 2.13 for the wildtype strain.11

The lab-modified strain is also engineered to be resistant to the smallpox vaccine.

Vaccine resistance is assumed to be driven by the introduction of the Interleukin-4 gene, as demonstrated in previous mousepox studies.12 We assume a case fatality rate of approximately 10 percent, which is consistent with previously described monkeypox outbreaks.13

To address these findings, the authors developed a series of recommendations.

These recommendation point to support for the WHO Pandemic Treaty (coupled with the QR Code) which consists in establishing a global digital data bank which derogates the rights of individual member nation states. (See

Two participants of the Monkeypox 2021 NTI simulation were involved in the John Hopkins 201 Scenario October 2019 Simulation of the novel corona virus 219-nCoV including George Gao Fu, head of China’s CDC and Chris Elias, Gates Foundation, both of whom played a key role in the SARS-CoV-2 pandemic.

And currently George Fu Gao is playing a key role in the implementation of China’s Zero Covid Mandate which has led to lockdown of Shanghai as several major urban and industrial areas starting in late March 2022. 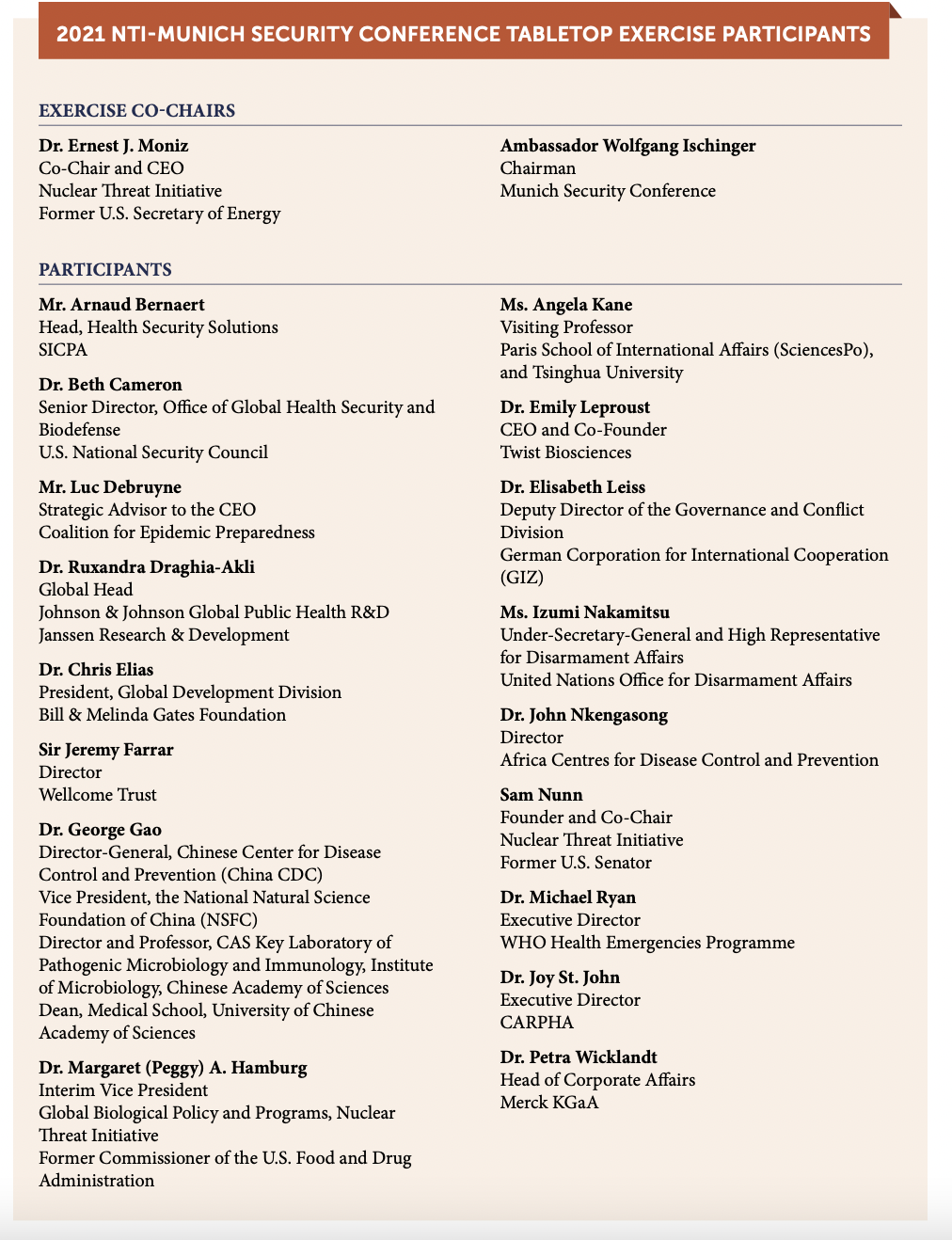 Is a new fear campaign being launched.

Governments have already placed orders for the delivery of small pox vaccines.

In the US according to a Forbes May 19, 2022 report, the U.S government has already ordered “millions of doses of a vaccine that protects against the virus”.

Bavarian Nordic, the biotech company that makes the vaccine, has announced a $119 million order placed by the U.S., with the option to buy $180 million more if it wants. Should that second option be exercised, it would work out to approximately 13 million doses.

The order will convert existing smallpox vaccines, which are also effective against monkeypox, into freeze-dried versions, which have a longer shelf life. The converted vaccines will be manufactured in 2023 and 2024, the company says.

There were only two confirmed cases in the US of monkeypox according to a press report published on May 19.

According to a Daily Mail Report 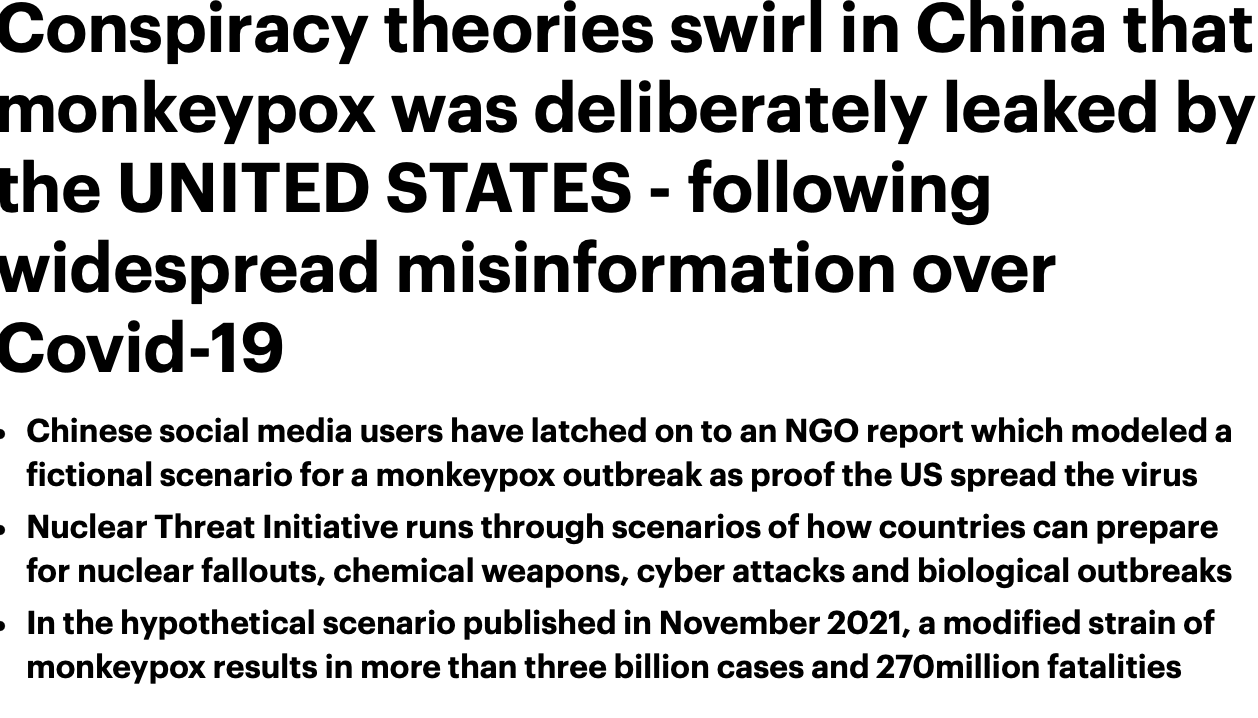 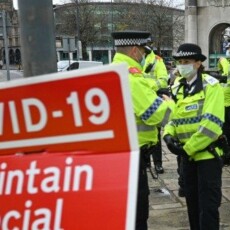 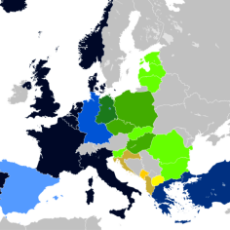