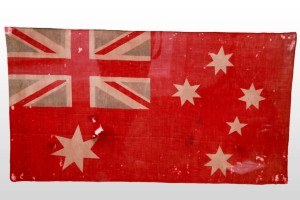 First flown at Gallipoli and then on the Western Front, this WWI red ensign was carried back to Australia in 1919 by Sergeant Norman Fraser Bignell who brought it with him when he moved to Bega. He later gave it to good friend and local resident John Shegog Gowing who passed it on to his daughter Ruth. It was she who subsequently donated it to the museum where it remains a highly important part of the collection.

The WWI red ensign is on display at the Bega Pioneers’ Museum.

We thank our brave Anzacs.

You will NEVER be forgotten and always in our hearts 🙂