By now the American electorate’s confidence in the FBI is hovering near zero.  FBI Director Chris Wray has done nothing to counter a reality of institutional corruption.

To the contrary, and factually, over the past several years the FBI have shown they are politically motivated in all their efforts. If the FBI was not political, they simply wouldn’t be seen taking a knee to express their political alignment with far-left causes: 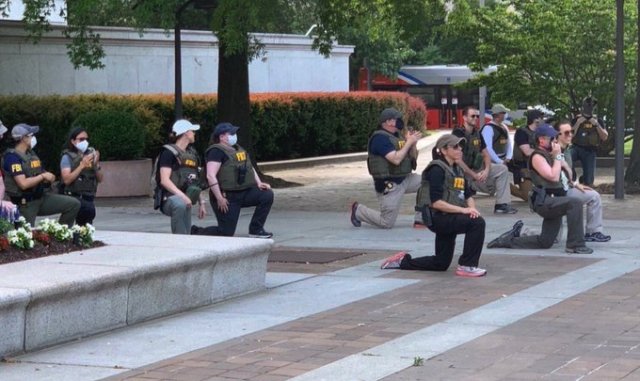 From the FBI involvement in attempted election interference in 2015 and 2016; to their 2017/2018 efforts to overthrow the U.S. presidency of Donald Trump; to the 2018 Caesar Sayoc case, a transparently self-interested attempt to sway the 2018 mid-term election and protect themselves from further investigation; to the FBI involvement in the 2019 SWAT arrest of Roger Stone; to the 50 FBI agents who worked with Andrew Weissmann and Robert Mueller on the special counsel operation… all the way to this announcement today, everything the FBI does is wrapped in their political ideology.

There is a profound irony when considering how the political left decries Russia’s use of state police for political purposes; and yet we see the United States FBI carrying out identically motivated federal police operations. Think carefully about it.

Michigan – […] The [FBI] news conference comes after the filing of a federal affidavit Thursday morning that describes an alleged plot to overthrow the government and kidnap Gov. Gretchen Whitmer.

The plot involved reaching out to members of a Michigan militia, according to the affidavit and federal and state law enforcement officials.

“Several members talked about murdering ‘tyrants’ or ‘taking’ a sitting governor,” an FBI agent wrote in the Thursday affidavit. “The group decided they needed to increase their numbers and encouraged each other to talk to their neighbors and spread their message.”

[…] On June 6, 2020, Croft, Fox and about 13 others from several states gathered for a meeting in Dublin, Ohio, near Columbus. Several talked about murdering the “tyrants” or “taking” a sitting governor.

Those present included an FBI confidential source who recorded the meetings. The source has been paid $8,600.

“The group talked about creating a society that followed the U.S. Bill of Rights and where they could be self-sufficient,” the FBI agent wrote.

Right about this point in the story-line if you find yourself wondering what is the difference between what has been described here, and the “Capitol Hill Occupy Movement”, or CHOP, you would not be mistaken.

Isn’t it strange how the FBI finds purpose in infiltrating this Michigan effort to support Governor Gretchen Whitmer, yet did/does nothing about Antifa or Blue State Occupy anarchists who physically took control over a major metropolitan area.  I digress…

“As part of that recruitment effort, Fox reached out to a Michigan-based militia group,” the agent added.

[…]  The FBI was already tracking the militia in March after a local police department learned members were trying to obtain addresses of local law-enforcement officers, the FBI agent wrote.

“At the time, the FBI interviewed a member of the militia group who was concerned about the group’s plans to target and kill police officers, and that person agreed to become a (confidential source),” the agent wrote.

In late June, Fox posted on Facebook a video in which he complained about the state’s judicial system and COVID-19 restrictions on gyms operating in Michigan.

“Fox referred to Governor Whitmer as ‘this tyrant b—-,’ and stated, ‘I don’t know, boys, we gotta do something,” according to the court affidavit. “You guys link with me on our other location system, give me some ideas of what we can do.”  (more) 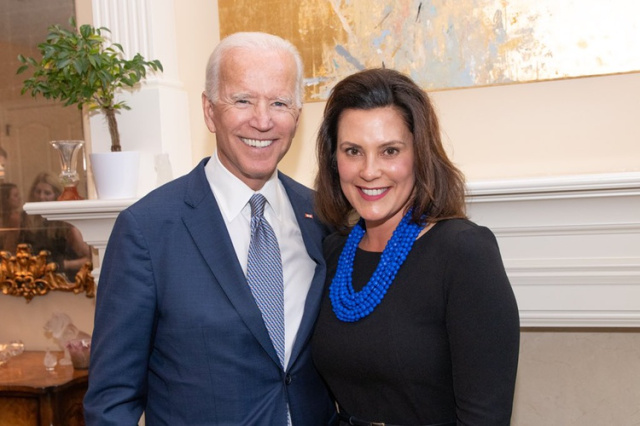 As a sidebar – this type of purposeful conflation was part of my own personal great awakening when U.S. media were proclaiming the Chinese govt crackdown upon students in Tienanmen Square as “hard right” government action. That conflation was completely false.  Communism or totalitarianism control is a far-left ideology; the creation of the ultimate state of oppressive government control is a move to the left.

There is a short space in the continuum between totalitarianism and anarchy.  Create the former and you will eventually devolve into the latter; it has always been thus.  This current narrative is an attempt to frame a false perspective; meanwhile civics is no longer taught in schools – this is not coincidental.

The FBI will not call Antifa a domestic terror group; yet the FBI will proclaim any “militia” as a domestic threat or “extremist group”.  The FBI definition of a “threat” is through the prism of big government preservation.  That perspective is part of the problem.

This is a video of Brandon Caserta, one of the ringleaders of the group of men arrested for a plot where the group planned to kidnap Governor Gretchen Whitmer. Caserta has an anarchist flag behind him and in YouTube videos trashes police. He’s not a Republican, he’s an anarchist. pic.twitter.com/J1vE2qGYL7

Watch this video of Brandon Caserta. He was arrested for plotting to kidnap Gov. Gretchen Whitmer. In this video he poses in front of an anarchist flag and calls police “a violent gang” and “enemies”. He’s an anarchist who hates government and police. pic.twitter.com/gYxaDQXcIj

FTA: “Those present included an FBI confidential source who recorded the meetings. The source has been paid $8,600.

“The group talked about creating a society that followed the U.S. Bill of Rights and where they could be self-sufficient,” the FBI agent wrote.”

In 2018 the political arm of the FBI pulled off this stunt in an effort to swing the mid-term election and protect themselves from discoveries of their 2015/2016 election efforts: pic.twitter.com/GLUYa9x4iv 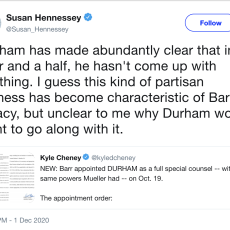 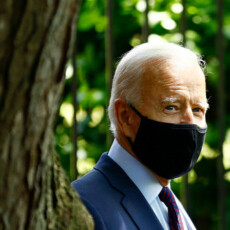