VERDICT: FALSE. Trump said the neo-Nazis should be “condemned totally.” Biden knows he is lying about this.

Remember seeing those neo-Nazis and white supremacists, coming out of fields spewing the same antisemitic bile heard across Europe in the ’30s. Remember the violent clash that ensued between those spreading hate and those with the courage to stand against it. And remember what the president said when asked? He said there were, quote, very fine people on both sides. That was a wake up call for us as a country and for me a call to action.

Biden has used the “very fine people hoax” since the very start of his campaign, even claiming that it motivated him to run. And he repeated it in the most important speech of this campaign thus far.

But the “very fine people” hoax remains a lie.

Breitbart News has fact-checked Biden’s use of this hoax almost every time he has used it — even confronting him directly at the Iowa State Fair last year:

From our coverage at last week’s event introducing Sen. Kamala Harris (D-CA) as his running mate:

Moreover, the neo-Nazis were not the only violent group in Charlottesville. The “clash” was not with those “standing against” hate peacefully, but with violent, black-clad Antifa extremists.

As to “very fine people,” Trump had been referring to peaceful protests both for and against the removal of a statue of Confederate General Robert E. Lee.

He completely condemned the extremists — as the timeline and transcript confirm: 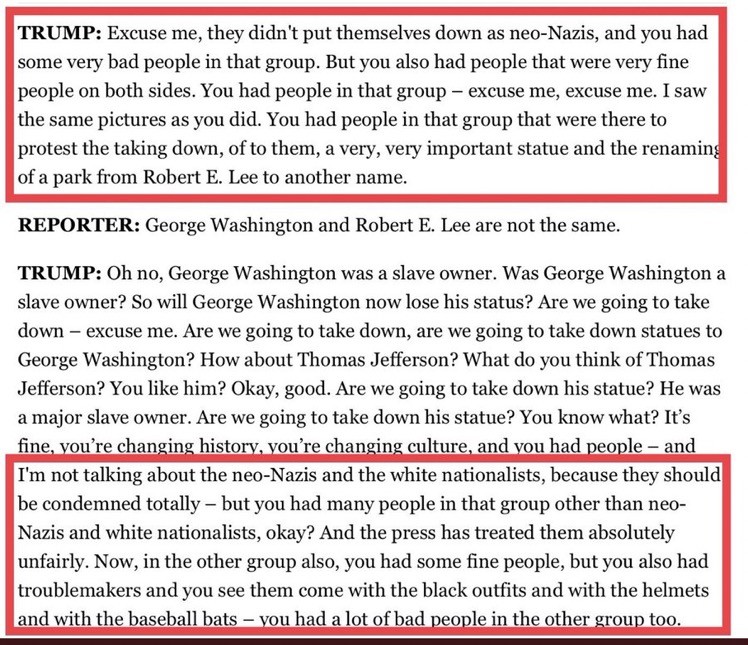 Biden launched his campaign with the Charlottesville hoax, and persisted in doing so, even after Breitbart News confronted him last August with the fact that he was misquoting the president. His words on that occasion, like his words on Wednesday, repeated his campaign launch speech almost verbatim — a script from which he refuses to depart.

Even CNN’s Jake Tapper — no fan of Trump — has admitted that Trump did not call neo-Nazis “very fine people.”

Yet it is the core message of Biden’s campaign.

It remains a lie.