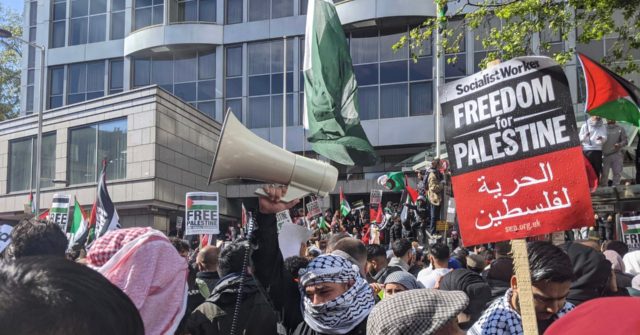 The “Free Palestine” protest against Israel in London descended into violence on Saturday, with activists attacking police officers with makeshift missiles and wooden sticks.

Thousands of demonstrators marched from Speakers’ Corner in Hyde Park to the Israeli embassy on Saturday afternoon. The protest was organised by the Palestine Solidarity Campaign, the Stop the War Coalition, the Friends of al-Aqsa, the Palestinian Forum in Britain, and the Muslim Association of Britain.

The protest in London was joined by the official Black Lives Matter UK organisation, which told its followers on social media to “Fight like Colombia! Resist like Palestine!”

At least 33 demonstrations were held across the UK on Saturday against Israel in response to the retaliatory military strikes carried out against Palestinian terrorists who have been launching rockets into the democratic nation.

The organisers said the intention of the protest was to “stand together for an end to Israel’s ethnic cleansing of the Palestinian people, and for the right of return for all exiled Palestinians”.

Outside the gates of the embassy, the activists chanted slogans such as “free, free Palestine”, “No justice, no peace”, “Israel is a terror state”, and “Allahu Akbar”.

At around 7:30 pm, police officers attempted to disperse the crowd under the auspices of breaching coronavirus regulations. The police were met with a violent reaction, with young men launching makeshift missiles at the officers, including glass bottles and, according to one Met police officer speaking to a protester and overheard by this publication, at least one brick.

The men also attacked officers with the wooden sticks which were previously holding up their pro-Palestinian placards. Some of the leaders of the protest did attempt to calm down the raucous crowd, but to no avail.

The Metropolitan Police said in a statement that nine officers were injured during the altercation outside the Israeli embassy. Nine people were arrested on suspicion of violent disorder, with a further four arrested for breaching coronavirus regulations.

The officer in charge of the policing operation, Superintendent Jo Edwards, said: “We once again saw police come under fire from missiles and several were injured as a result of this. It is totally unacceptable and I wish those officers a speedy recovery.

“Throughout the day, officers sought to engage with people who had gathered to demonstrate, and encourage them to disperse to help protect themselves and others during this public health crisis. Where this approach did not work and officers were met with hostility, they took enforcement action.”