President Trump ordered the Department of Homeland Security (DHS) to send in around 100 Federal Protective Service (FPS) agents to defend the federal courthouse that had been under siege for two months by violent anarchists who were intending to destroy the building. Miller, in an appearance on Breitbart News Tonight on SiriusXM 125 the Patriot Channel on Tuesday evening, made the case that the Trump administration’s actions have officially quelled the violence of the “riotous mob” by stopping those rioters from setting off a chain reaction of events that would have led to more destruction beyond  the federal courthouse.

Trump, Miller argued, successfully forced the hand of Oregon Gov. Kate Brown, a Democrat, and Portland mayor Ted Wheeler, another Democrat, to lift stand down orders they had given to state and local law enforcement that effectively allowed the anarchist mob free reign over Portland.

In the wake of Trump’s Portland success, which was also explained in the Wall Street Journal in a piece by Bill McGurn that Trump tweeted on Tuesday night, the establishment media and Democrats have tried to revise the history of what happened.

“Something big has changed in Portland, Ore. After weeks of chaos and flames outside the city’s federal courthouse, the past few days have seen the violence subside dramatically. What happened?” William McGurn @WSJ

In the telling of those seeking to revise history, it was the federal agents’ presence that caused the violence and subsequent withdrawal of those forces was what quelled the rioting. Miller, during his appearance on Breitbart News Tonight, debunked this false revisionist narrative.

“So the federal courthouse in Portland was under attack for over 60 days by anarchists, Antifa, and left-wing violent extremists,” Miller said. “The city of Portland refused to provide protection to the federal courthouse, thereby, in effect, aiding and abetting the lawless mob, and rioters allowing them to descend upon the courthouse and to do violent damage to it. The president, consistent with federal law and the requirement for the protection of federal buildings, and the Department of Homeland Security, developed a plan to save the courthouse that was in Portland. Had they not dispatched the additional DHS personnel, which are under the authority and control of the Federal Protective Service, or FPS, whose congressional mandate is to protect federal buildings, if they hadn’t dispatched those officers, the courthouse would have been razed to the ground. It would have been completely and totally destroyed. That’s the first fact to keep in mind as one of the terrible lies from the media, which is almost beyond redemption, is that the federal government somehow incited the riots and the violence. That is a reprehensible lie on the part of the elected officials in Portland and Oregon. The lawless mob besieged a federal building and, had additional resources not been sent [to] that building, would have been absolutely destroyed. And I might add it would have been your tax dollars and our tax dollars that would have had to pay to eventually rebuild the destroyed courthouse. You can imagine what a national and international debacle it would have been if a U.S. district court was burned to the ground live on television by anarchists. So that building was saved. That’s step one.”

After the federal agents saved the building, step two, Miller said, was ensuring the safety of the federal officers from the violent mob.

“Step two in this process was then the nightly violence perpetrated by the lawless mob against brave personnel at the Department of Homeland Security,” Miller said. “The Department of Homeland Security contingent was a little bit over a hundred law enforcement officers and their mission was a defensive mission to save and defend the courthouse against the rioters and the rioters that were then engaging in now direct violent assaults against law enforcement. Arrests were carried out by DHS in response to specific acts of violence being perpetrated against them. They were not operating as, although they would have the right to, as an advanced police force generally protecting the streets of the city. They were operating as a defensive line to protect the courthouse, and I’ve likened it to the line between chaos and civilization, because if the mob is allowed to burn down the courthouse, then that is that – it’s chaos burning down civilization. So, the city again during this whole time refused to provide any support at all. In fact, they barred the Portland Police from supporting the effort to defend and save the courthouse. They gave free reign, in effect created an autonomous zone—a secessionist activity, if you will—where federal law and state law and city law was suspended and they said that, in effect, the rioters can freely assemble here to launch their nightly attacks against the federal building.”

Eventually, Miller said, the president forced the state’s Democrat governor to agree to send in state police to help restore law and order and take control away from the anarchists’ violent mob.

“Our government then made clear, the federal government issued an ultimatum to the state of Oregon and to the city of Portland that said ‘either you clean this up or we will. Either you send in law enforcement or we will,’” Miller said. “In response to that, the governor, who was presumably inundated with requests or cries for help from her constituents, then agreed to send in state troopers, the state police, at our request for the purpose of, now beyond the fence line, going out and enforcing a general clearing out of the rioters in all the blocks where they had assembled to launch these nightly attacks. That was coordinated with the Department of Homeland Security and not a single federal agent was withdrawn during this time period. Every federal officer was in place. So that brings me to the last lie, just as egregious and hateful as all the other lies, which is that somehow the violence subsided because the federal forces were withdrawn. No, federal forces were A, not withdrawn, and B, the sole factor that changed the scene in Portland is that our law enforcement plan was initiated by the state at our urging and under pressure from President Trump. That is the reason why the violence ended. The travesty here is that it took 60 days for the state to do it, but rest assured if we hadn’t sent in, if President Trump had not sent in those DHS reinforcements, that courthouse would be nothing but ash right now.” 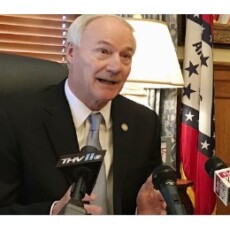