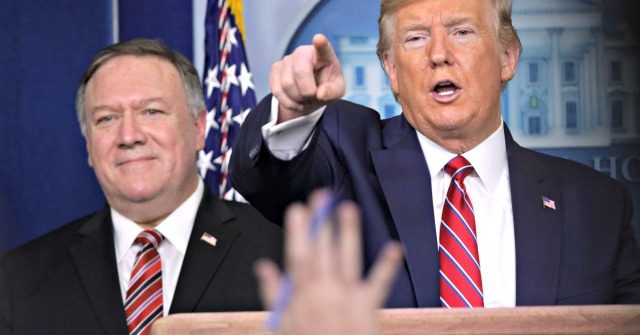 Secretary of State Mike Pompeo told Breitbart News in an exclusive interview in his office at the State Department in Foggy Bottom in Washington, DC, that he believes, no matter who is president next year, President Donald Trump’s “America First” vision for the country and the world will have a “lasting legacy” far beyond this past four years.

“America First makes sense,” Pompeo said when asked during the interview if the president’s vision has legs beyond this administration. “It makes sense not only to the American people, but the world can now see that when we get it right, when America gets it right at home, it’s not America alone. It’s America as a force for good in the world and demanding that every nation do that for themselves as well—protect their own sovereignty. I think the theory that President Trump laid down, that I articulated back in Claremont two years and three months ago, that the case for America First will have a lasting legacy because it is the right direction for America at this time in history.”

President Trump rode into office after a shocking 2016 electoral college defeat of Pompeo’s predecessor, former Secretary of State and Democrat Hillary Rodham Clinton, defeating her with 306 electoral votes to her 232 electoral votes. Trump fundamentally changed the way the United States approaches its place and role on the world stage, pursuing what he described as an “America First” vision for the world. That did not mean an unwillingness to use military force and might when necessary. From the get-go and throughout his administration–from strikes against Syria after Bashar al-Assad used chemical weapons through early 2020 when he used a drone strike to eliminate Iranian Gen. Qassem Soleimani–he demonstrated the willingness of the United States under this vision to use military force to pursue American interests abroad. But at the same time, the United States has entered into no new wars during Trump’s presidency—the first in decades where that has been the case—and Trump and his core administration officials like Pompeo have used the economic and diplomatic might of the United States to great effect in places ranging from China to the Middle East to Europe and elsewhere around the world.

Pompeo argued in this interview that Americans—and the world—have been the beneficiary of the success of the America First vision. From reenergizing NATO to better prepare for the future to combating the Chinese Communist Party through restructuring the Middle East with historic peace deals like the Abraham Accords and a U.S.-Taliban agreement that sets the stage for the eventual withdrawal of all U.S. forces from Afghanistan, ending the nation’s longest war ever as well as directly confronting rather than appeasing the Islamic Republic of Iran, Pompeo says the world is “safer and more secure” for Americans now than before Trump took office. He also argued that the rest of the world appreciated the more active role the Trump administration took in shaping America’s vision on the world stage than the failures of the previous administration.

“I started the administration as the director of the CIA, so I had a chance to get a very good grounding in the state of play when the administration took office all around the world,” Pompeo told Breitbart News. “I spent the last almost three years as the Secretary of State. What one can say with certainty is two things: One, Americans are safer and more secure today than they were four years ago. Second, the world has appreciated an America that wasn’t prone to appeasement, that was serious and direct, that didn’t pull punches. When NATO was headed down a path that was going to lead to a very bad outcome, President Trump said no, we got to fix this thing. We got to make it fit for purpose. So, now there is $400 billion more in the next four years that will be spent by non-U.S. NATO allies. It’s focused on cyber and space and on China, and is now headed in a direction that will make NATO relevant for the next 70 years. We acknowledge that the Chinese Communist Party poses a threat to the world rather than saying, goodness, if we can figure out how to make some more money there we ought to let this continue while China acts in ways that are inconsistent with keeping Americans safe and prosperous for the next decade or 20 years. We addressed it. What’s another good example? I could go on—the Middle East. We confronted a situation where the previous administration had said that Iran ought to be our best partner, here’s $150 billion to continue your terror campaign. We said that’s disgraceful. We acknowledged that the relationship between Israel and the Palestinians had to be resolved, but we didn’t let either of those two facts get in the way of creating peace and stability, and so we built out a set of relationships, we put pressure on the regime in Iran, and you now have multiple countries that have said they’re going to recognize Israel, you have security architecture that is built out, and you have an Iranian regime that is infinitely weaker than it was when we came into office. Those are just three examples of where this theory of the case the president laid out with America First, which meant you can still work with partners, it’s not America alone. You can still build out coalitions and build out friendly elements of an alliance. Second, when America does well, the whole world is safer and more secur, and I think that’s plain for all to see today.”

When Americans voted on Nov. 3, Trump got more votes than he did in 2016—74 million plus Americans voted for him this time, a significant increase of more than 10 million more votes than last time. He held together the core of an electoral college victory with wins in Florida, Ohio, Iowa, North Carolina, and Maine’s second congressional district. He also made historic gains in black and Hispanic communities, hitting record levels in both for a Republican. The GOP held key U.S. Senate seats almost everywhere across the country, from Maine, where GOP Sen. Susan Collins (R-ME) fended off Democrat Sara Gideon, to North Carolina where GOP Sen. Thom Tillis (R-NC) defeated Democrat Cal Cunningham. Depending on the runoffs on Jan. 5 in Georgia, the GOP seems to have held its majority in the U.S. Senate. That’s not to mention significant pickups in U.S. House seats. When almost everyone in establishment media and politics expected Democrats to pick up seats in the lower chamber of Congress, the Republicans shocked the world and won a bunch of seats—narrowing the Democrat majority in a big way. But as it stands now, despite the president’s challenge to key states like Georgia, Arizona, Nevada, Pennsylvania, Michigan, and Wisconsin, Democrat candidate and former Vice President Joe Biden has enough electoral votes in states that have certified their results to retake the White House for the Democrats. The president’s challenge remains ongoing, and litigation continues in many of those states, but no matter who emerges as the victor of the presidential election on the other end of this fight, Pompeo is of the belief that America First will live on for years to come.

This is the first part of a series of pieces from Secretary Pompeo’s latest interview with Breitbart News. More is forthcoming.

COVID-19: Who Is Responsible for ‘Unfathomable’ Deaths? 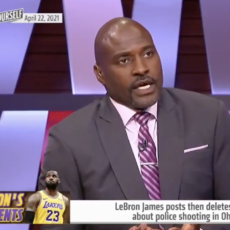 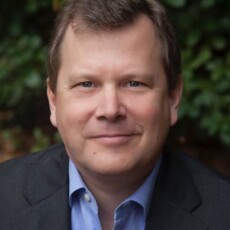