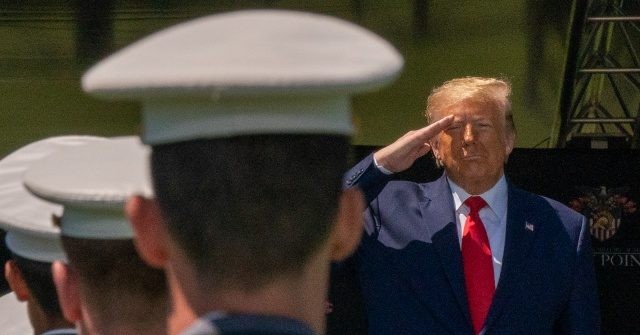 Nearly 700 American veterans have issued an open letter affirming their support of President Trump against establishment media attacks weeks before the 2020 presidential election.

This week, The Atlantic journalist Jeffrey Goldberg published a story citing anonymous sources, claiming that Trump did not want to visit the Aisne-Marne American Cemetery at the site of Battle of Belleau Wood in 2018. The story, citing those anonymous sources, claims Trump called the cemetery “filled with losers” and referred to fallen soldiers who died at Belleau Wood as “suckers.”

In an open letter obtained exclusively by Breitbart News, about 674 veterans wrote that their support for Trump, against attacks by the establishment media, remains unwavering because of his record of supporting the United States military and ending foreign wars.

“Recent baseless media attacks against President Trump from anonymous sources are just another example of the depths to which the President’s opponents are willing to descend to divide the nation and meddle in this election,” the Veterans write.

“Anyone who knows President Trump has seen his love and reverence for our military and veterans. That is why we, veterans from every generation, are writing today to reaffirm our support for President Trump,” they continue:

We heard these same attacks in 2018 immediately following the President’s trip to Paris, and they are just as fake now as they were then. The false allegations center on the President’s canceled trip to a military cemetery, which has been proven to be a “bad weather call” made for safety and security reasons. This has been proven by internal White House emails from the time, as well as by documents from the U.S. Navy, which clearly described weather as the reason for the cancellation. While the media relied on four anonymous individuals to manufacture the story, many more current and former White House officials have stepped forward and, on the record, refuted these baseless allegations. These on-the-record voices include the Secret Service agent in charge of the President’s detail and John Bolton – a vocal critic of the President – who described the “bad weather call” in his book and now says he did not hear the President say the things being attributed to him. No one should take this story seriously.

Throughout his administration, President Trump has consistently stood by our men and women in uniform and cared for them once they have returned to civilian life. From groundbreaking legislation that provides veterans with real and permanent health care choice, to the largest-ever investment in the United States military, to his firm commitment to preventing endless wars and bringing troops home, President Trump has demonstrated his unwavering support for America’s service members time and time again. Moreover, he has spent countless hours as president visiting battlefields and cemeteries, honoring Gold Star families and comforting them in their grief, and praising wounded warriors and honoring their sacrifice.

The veterans condemn Democrat presidential candidate Joe Biden’s record on military and veterans issues, writing “the Mainstream Media hurled this baseless attack against President Trump because they know Joe Biden’s record simply does not stand up to scrutiny, and they seek to distract the American people from that fact.”

Under the Obama-Biden Administration, the Department of Veterans Affairs was a disaster and our military was decimated. Today, Joe Biden is running on a radical left-wing agenda that would further weaken America’s security and standing in the world. Joe Biden’s friends in the media know he does not deserve the support of our nation’s service members, so they have fabricated a total lie in a desperate attempt to attack their opponent.

The American people have learned to discount lies spewed by anonymous sources and paraded around by a biased media bent on destroying the President. President Trump’s tireless efforts to strengthen and support the military community are a part of his indisputable record. He has done more for our nation’s service members and veterans than any previous administration. The veteran community firmly rejects these lies from the mainstream media, and we stand by our Commander-in-Chief, now, and on Election Day.

The full open letter can be read here:

Trump, along with first lady Melania Trump, has called The Atlantic story untrue, do a number of White House officials who were on the trip. Those officials include Jordan Karem, Stephen Miller, Johnny DeStefano, Sarah Sanders, Hogan Gidley, Dan Scavino, and John Bolton.

“It was a totally fake story, and that was confirmed by many people who were actually there,” Trump said.

The story came as Trump has promised to bring thousands of American troops home from Afghanistan.

Unlike Trump, who has long opposed the Iraq War and the invasion of Afghanistan, Biden has supported a long list of foreign interventions by the U.S. that have sent American troops overseas without a timeline of when they will return home.

Former President George W. Bush led the U.S. into war in Afghanistan and Iraq, with more than 4,500 Americans dying in Iraq — including more than 3,500 killed in combat — and up to 205,000 Iraqi citizens dying in the war since March 2003.

In total, Bush’s post-9/11 wars in Iraq, Afghanistan, and intervention in Pakistan have resulted in the deaths of between 480,000 and 507,000 people — including nearly 7,000 American soldiers who had deployed to the regions.

Biden voted for the Iraq War and supported U.S. nation-building in Afghanistan. Biden also opposed the U.S. raid that killed al-Qaeda leader Osama bin Laden, claiming that the risks were “too high.” 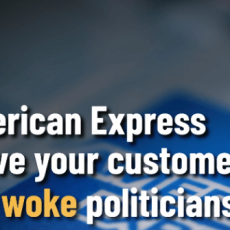 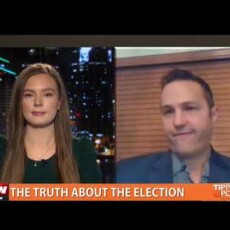