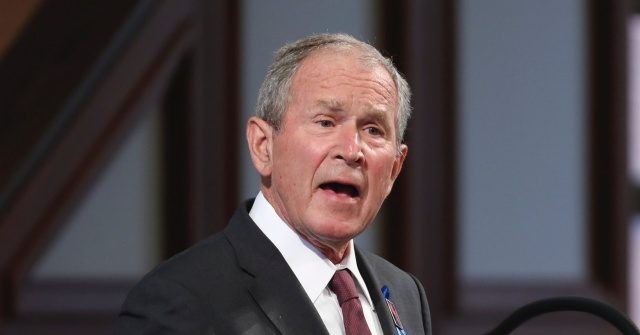 While promoting his new book Out of Many, One, featuring portraits of immigrants, Bush said Republicans must be “more respectful” to immigrants and issued an op-ed in the Washington Post calling for amnesty for illegal aliens and increased legal immigration levels.

Bush said he considers not passing an amnesty for illegal aliens to be one of his biggest failures as president. During his eight years in office, Bush oversaw the invasion of Iraq and Afghanistan, the bailout of the nation’s biggest banks, and the Great Recession.

Former President Donald Trump won the 2016 election by vowing to reduce overall immigration levels and winning huge swaths of Hispanic voters in the 2020 election on a similar platform. Republican insiders tell Breitbart News that Bush’s Republican Party of “pro-corporate globalism” that sought to provide business with a never-ending flow of cheaper foreign labor is, thankfully, over.

“Any Republican still taking their cues from George W. Bush or the neocons is laughably out of touch,” a Senate GOP aide said. “Calling for mass amnesty while lockdowns have forced millions of Americans out of work is unhinged. This kind of ‘compassionate conservatism’ and pro-corporate globalism decimated the working class … people have had enough.”

Bush’s legacy on immigration and outsourcing of American jobs have become policy initiatives that elected Republicans have tried to shed. In 2006 and 2007, Bush attempted to pass his “Any Willing Worker” agenda through Congress, which gave amnesty to millions so as to provide a flooded labor market to the business lobby. The initiative failed and his approval rating tanked soon after.

In 2004 and 2006, Bush defended and advocated for the outsourcing of American jobs by multinational corporations. In 2005, after Hurricane Katrina devastated the Gulf Coast, Bush waived labor protections for American workers, which allowed an estimated 30,000 illegal aliens to enter the region to take coveted blue-collar jobs.

The post-Katrina Bush policy was so generous to illegal aliens that it brought thousands to work for companies who were contracted by the Federal Emergency Management Agency (FEMA).

Such a legacy has made Bush an irrelevant political figure, Republican insiders told Breitbart News. One Senate GOP aide responded, “Who?” when asked about the former president.

“I’m not sure whether there are any ‘George W. Bush Republicans’ left, but the lack of bipartisanship in Washington is not something that would be fixed by Republicans unilaterally surrendering to Democrats or abandoning the rule of law,” the aide said.

“[Bush] is not relevant to today’s discussion on immigration,” a House GOP aide said. “Republicans are well aware that his presidency was a national disaster on this issue as he failed to act when needed. Bush immigration policy has no impact today other than a reference on what not to do”

Bush’s legacy, other Capitol Hill staffers said, is wildly unpopular and out of step with not only Republican voters but swing voters and the majority of Americans. The latest Rasmussen Reports survey, for example, shows nearly seven-in-ten Americans support banning employers from hiring illegal aliens, while 65 percent say businesses should recruit Americans rather than importing foreign workers to take U.S. jobs.

Most significantly, more than 70 percent of Americans — including 84 percent of Republicans and 66 percent of swing voters — said they want legal immigration levels reduced. Currently, about 1.2 million legal immigrants secure green cards every year in addition to 1.5 million foreign nationals who obtain work visas.

“If you’re a Republican and you run on a Bush-like GOP platform today, you’re odds of winning a primary are between slim-to-none,” a senior GOP aide said. “You can’t win. The voters aren’t there.”

In the 2020 election, the base of donors for Trump and Republicans encompassed working and middle-class Americans from various walks of life, including police officers, small business owners, homemakers, truckers, electricians, and construction workers.

Republican Study Committee (RSC) Chairman Jim Banks (R-IN) has since warned GOP leadership that the party must embrace the support of the nation’s working-class with immigration reduction policies, a divorce from Wall Street and multinational corporate interests, and initiatives that take on Big Tech’s monopoly power in the market.

One such memo by Banks this month serves as a repudiation of the Bush legacy on immigration, which has resurfaced since President Joe Biden entered office in late January.

“The Biden immigration agenda sacrifices the interests of the American People in order to serve the interests of foreign citizens, criminal cartels, and ultra-wealthy multinational corporations,” Banks wrote in the memo.

The general disdain for the Bush legacy is not confined to GOP circles.

Pro-American worker groups who remember the days of the “Any Willing Worker” initiative view Bush’s latest statements as more of the same globalist vision that voters have increasingly rejected.

“This is a bunch of repackaged nonsense that has no home in today’s Republican Party,” RJ Hauman, with the Federation for American Immigration Reform (FAIR), said. ” … Bush has plenty of other failures and regrets that the American people are still paying for today. He should address those instead.”

Other groups want Bush to keep at his artistic endeavors.

“Idea for George W Bush’s next book: Portraits of workers at AT&T in Dallas who were laid off and forced to train their H-1B replacements,” the White Collar Workers of America wrote in a post online. 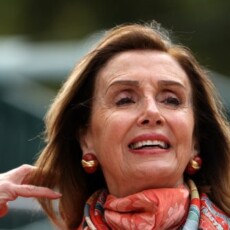 Pelosi on Cuomo: ‘Should Look Inside His Heart’ to See If He Can Govern Effectively 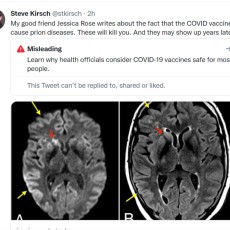