Jacksonville, Florida – United States Attorney Maria Chapa Lopez announces that Thomas Lester Hazouri, Jr. (40, Jacksonville Beach) has been arrested and charged by federal criminal complaint with distributing child pornography. Hazouri faces a minimum mandatory penalty of 5 years, and up to 20 years, in federal prison, a $250,000 fine, and a potential life term of supervised release. Hazouri has been detained pending a hearing scheduled for September 11, 2020.

According to the complaint, MediaLab, the company that hosts the Kik online messaging application (“app”), notified the National Center for Missing and Exploited Children (NCMEC) that one of its users, identified by user name “mybfsgaynotme,” had uploaded suspected child sexual abuse videos on March 26, 2020, using an account whose subscriber information included the email address “[email protected]” Further investigation by the Jacksonville Sheriff’s Office revealed the internet protocol address used to distribute these videos on Kik resolved to the residence of Thomas Lester Hazouri, Jr. in Jacksonville Beach. JSO determined that Hazouri was a second grade teacher assigned to Mayport Elementary School in Jacksonville.

A search warrant was issued for the Kik account for user “mybfsgaynotme,” and this account contained 19 images and 45 videos that depicted child sexual abuse. On August 6, 2020, JSO detectives and other personnel executed a search warrant at Hazouri’s residence and seized an Apple iPhone XR, as well as two laptop computers. Forensic examination of the iPhone revealed that it contained 123 images and three videos depicting child sexual abuse, including depictions of very young children. The email address “[email protected]” originally reported to NCMEC in March 2020 was the email address used for the Gmail, Tinder, and Uber accounts on this iPhone. JSO detectives observed a tattoo on Hazouri’s wrist that matched the tattoo shown in a photo of a male masturbating that was recovered from the Kik account for user “mybfsgaynotme.” JSO also confirmed that a particular rug pictured in a photo recovered in this same Kik account matched an actual rug in Hazouri’s classroom at Mayport Elementary School. On August 19, 2020, JSO officers arrested Hazouri in Jacksonville.

On August 27, 2020, JSO and the FBI confirmed that on March 26, 2020, the Kik user of the “mybfsgaynotme” account distributed at least four videos depicting child sex abuse to several other Kik users.

This case was investigated by the Jacksonville Sheriff’s Office, the Federal Bureau of Investigation, and the Duval County School Police Department. It is being prosecuted by Assistant United States Attorney D. Rodney Brown. 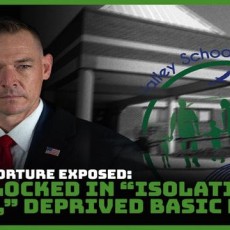