There was another massive enthusiastic crowd in Melbourne today. And I sense each week the crowd is getting more focused and resolute. Numbers will encourage non-compliance.

However, the cognitive dissonance of mainstream doctors seems to have not waned in spite of overwhelming evidence of a vaccine catastrophe. I live in a small apartment block and almost everyone I know has a close friend with a serious injury. Let me cite a few I have heard the last two days.

My close neighbours go horse riding once a week. The woman at the stables had recently fallen pregnant, and her doctor quickly advised her to get the shot for her and the baby’s safety. She miscarried a few days later. Have these doctors not read the studies?  My other neighbour said it affected her legs badly, and her friend began losing her hair after the second vaccination. I heard of another baby, after just arriving in this world, who had to be rushed to heart surgery with a hole in the heart. Another’s mum died in her sleep — mysteriously. Celine Dione has postponed her Las Vegas concert residency after suffering “severe and persistent muscle spasms” (after her shots).

I have heard of hundreds suffering (and dying) from vaccine injuries, but none of their doctors are reporting them as vaccine injuries. It just goes on and on… yer authorities keep plugging the poison.

And yesterday “it” arrived. The GOVERNMENT ALERT to encourage you to get your booster — signed by Scomo, the departing minister for Health, Hunt, and then Chief Kelly. What a disgrace. The letter read:

“It’s now time to think about your COVID-19 vaccine booster, for those who are fully vaccinated…

“Twenty months ago, Australia was at the start of a once-in-a-century pandemic, the size, and scope of which we could barely comprehend at the time. … We made the sacrifices and followed the medical advice… our health response has saved over 30,000 lives.”

What a disaster. The pamphlet should read, “Twenty months ago, Australia was at the start of a once-in-a-century PLANDEMIC, the deception on a scale we can barely comprehend.” 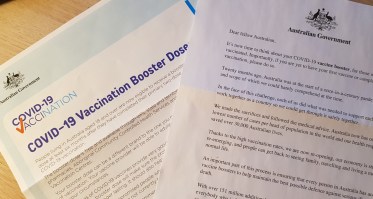 “Exiting Chancellor Angela Merkel announced on Dec. 2 that Germany will lock down unvaccinated people as top officials also signaled that they would back plans for mandatory vaccinations in the coming months. Merkel said individuals who aren’t vaccinated for COVID-19 will be excluded from nonessential stores and cultural and recreational venues. The Bundestag, Germany’s Parliament, also will consider a general vaccination mandate. ‘The situation in our country is serious,’ she told reporters, claiming that the new measures are an ‘act of national solidarity’.”

And now there’s the Omicron scare — it’s spread to 38 countries, but NO DEATHS.

On Friday, needing some ‘essential’ items (like clothes), I decided to try my luck at my local Op-shop — the local Salvos. Signs, codes and warnings were plastered on the door, alongside a large security guy blocking most of the entrance. After he quickly confirmed that it was no entry for the lepers, I engaged him in conversation. I reflected on South Africa’s apartheid, and after saying that he was from Iran, I said “you know all about this then”. He agreed. But our conversation was cut short. The sullen manager obviously did not like my passion, and appeared in the doorway and instructed the security guy to get into the shop. The manager then quickly shut the glass door in my face. Well, it cemented my place in society.

In all of my discussions, many are distressed about their injuries or the injuries of family members. There is this strange acceptance that this is the new normal. Some believe the ‘big one’ is still coming — hence all the passing of new pandemic laws after the once-in-a-century pandemic is over. We will see.

However, it was encouraging to hear Stew Peters interview Dr Zandre Botha — yet another doctor from South Africa. She is part of a group of doctors that have come up with a protocol to counter some of the catastrophic harm caused by the jabs. 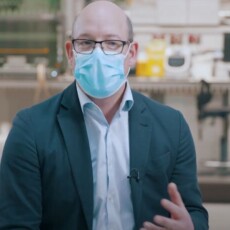 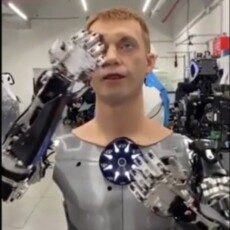 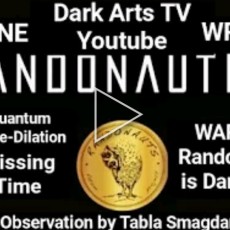