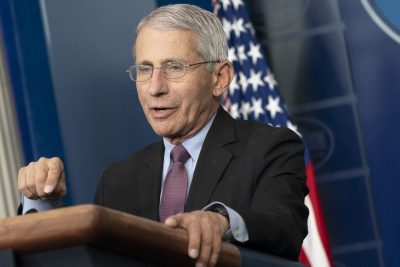 One of the most frustrating aspects of COVID-19 coverage has been the emphasis on “cases,” reinforced by Dr. Anthony Fauci. In fact, he was wringing his hands about rising “case” numbers on CNN in early October. These numbers are actually positive tests. The New York Times and several experts admitted in late August that up to 90% of positive PCR tests were not indicative of the active illness that could be transmitted to others.

As it turns out, Fauci expressed a similar opinion in July. As I have reported several times before, the cycle threshold (Ct), or the number of times the test sample is amplified, is too high. According to Just the News, Dr. Fauci acknowledged this in an interview with “This Week in Virology”:

Joining the hosts of This Week in Virology in July, Fauci directly responded to a question about COVID-19 testing, specifically how patients with positive tests might determine whether or not they are actually infectious and need to quarantine.

“What is now sort of evolving into a bit of a standard,” Fauci said, is that “if you get a cycle threshold of 35 or more … the chances of it being replication-[competent] are minuscule.”

“It’s very frustrating for the patients as well as for the physicians,” he continued, when “somebody comes in, and they repeat their PCR, and it’s like [a] 37 cycle threshold, but you almost never can culture virus from a 37 threshold cycle.”

He also noted that the Ct count is not provided to patients and physicians automatically. The tests are simply returned as positive or negative. The entire idea of “asymptomatic” cases dissolves once you understand this. Especially when you understand there is a level of immunity in the population because of T-cell reactivity. This is long-term immunity related to exposure to other coronaviruses. People who have this reaction would have the same presentation as a recovered patient.

Obviously, the CDC knew there was an issue with picking up inert viral RNA. In July, the agency discouraged retesting recovered patients who suffered mild-to-moderate illness. Here was the rationale:

Recovered persons can continue to shed detectable SARS-CoV-2 RNA in upper respiratory specimens for up to 3 months after illness onset, albeit at concentrations considerably lower than during illness, in ranges where replication-competent virus has not been reliably recovered and infectiousness is unlikely.

It looks like the FDA was aware of this glitch in the PCR test as well. In the Emergency Use Authorization for Panther Fusion’s COVID-19 PCR test, it is noted under “Limitations”:

A positive result indicates the detection of nucleic acid from the relevant virus. Nucleic acid may persist even after the virus is no longer viable.

The Panther Fusion SARS-CoV-2 assay may be used to test asymptomatic individuals, although performance has not been demonstrated in an asymptomatic population. This assay has been shown to exhibit high sensitivity when tested with the FDA reference panel.

Granted, Panther is one of many PCR tests. However, The New York Times‘ reporting, the CDC guidelines, and Dr. Fauci’s comments confirm these principles can be applied to PCR testing generally. Experts interviewed by The New York Times suggested a cutoff of 30 Ct would be appropriate. If Dr. Fauci arrived at this conclusion in July, why are labs in the United States still using up to 40 Ct. as the standard when it appears the right Ct is somewhere between 30 and 35?

Dr. Fauci and other “experts” like former FDA Director Dr. Scott Gottlieb are constantly pushing positive tests and lamenting a rise in their numbers. They erroneously refer to these numbers as cases, which they are not under any previous definition. It is also clear there is likely some significant number of false positives. So what gives?

COVID-19 was obviously used as a rhetorical weapon to club President Trump. It became clear late in the election that Dr. Fauci was more political than he portrayed when he essentially endorsed Joe Biden.

Further, some segment of the public health establishment wants widespread vaccination and other policies like mask mandates and rolling lockdowns. High “case” numbers allow them to push these policies. High positive test numbers also create a higher R-naught, which is the measure of contagiousness. These policies are easier to push if the public believes COVID-19 is horribly contagious, making it seem a danger to at-risk loved ones.

Perhaps most deceptive, the Ct is a simple lever to pull to keep you in line and make Joe Biden look like a hero. His new COVID panel will develop and implement a plan. Then positive cases will magically drop, not because these policies were effective but simply because they will dial down the Ct with clear guidelines.

However, this will cement the supremacy of “experts” in the minds of many Americans who have not seen the dishonest little man behind the curtain. Don’t be one of those people.

Trump — I know one damn thing about Joe Biden…