of the Crimes Act and its application within the State of Victoria.

“On duty at a designated place”, lets look and go on the legislative journey

to find out where a designated place is, and where it applies to within Victoria?

“designated place” has the same meaning as in the Victoria Police Act 2013 .

We are guided to look at the meaning within the Police Act 2013.   Lets take a look.

The meaning now guides us to section 52 of the Act.

(3)     The regulations may prescribe a place to be a designated place for the purposes of this section.

Which now guides us to the Victoria Police Regulations 2014.

For the purposes of section 52 of the Act, a place on or within any of the following places is a designated place—

(c)     any roadway or other thoroughfare giving access to rail premises or specified bus premises;

(d)     any area on or adjoining rail premises or specified bus premises used by other modes of transport including taxi ranks;

(e)     any car park controlled by a Council (within the meaning of the Local Government Act 1989 ) that is adjoining rail premises or specified bus premises;

(h)         any rail premises on or adjoining the land referred to in paragraph (g), including any car parking area on the rail premises;

(j)         a road on which a specified route bus or rail replacement bus provides a bus service at the time the service is in operation;

(l)     the municipal district of a Council referred to in Schedule 2.

So 456AA applies only to places listed from (a) to (k) & the Melbourne Metropolitan Area and the municipal Council districts found in schedule 2.

So lets take a look at the municipal council districts 456AA applies to.

So which areas does s456AA fail to apply within?

Could it be possible that if you are in any area listed below in blue you do not have to comply with s456AA?

It appears 38 council areas are exempt.

To find out which council area you live in visit find a council. 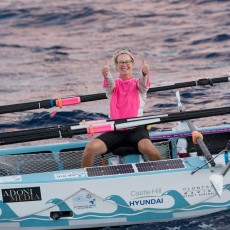 Michelle Lee to row across the Pacific Ocean