Democrats attacked former UN Ambassador Nikki Haley on Tuesday, accusing her of changing her name from “Nimrata” to avoid racial discrimination. These racist allegations were levied against Haley, a daughter of Indian immigrants, after she spoke at the Republican National Convention on Monday night, declaring that “America is not a racist country.”

South Asians for Biden was the first group to target Haley, claiming that she probably felt “compelled to change her name to ‘Nikki’” because the Republican Party is racist. The hashtag #PhonyNikki accompanied the tweet along with #BidenHarris2020. 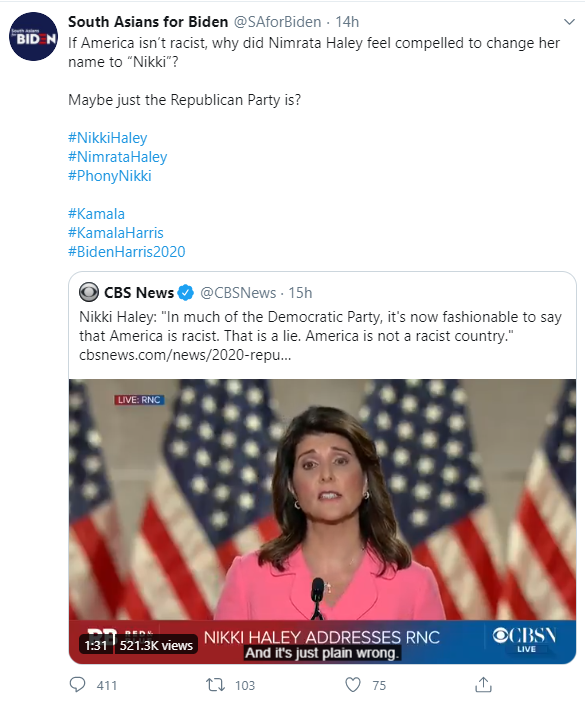 Asha Rangappa, a CNN analyst and former FBI special agent, also tweeted about Haley, insinuating that she changed her first name due to racism in America. 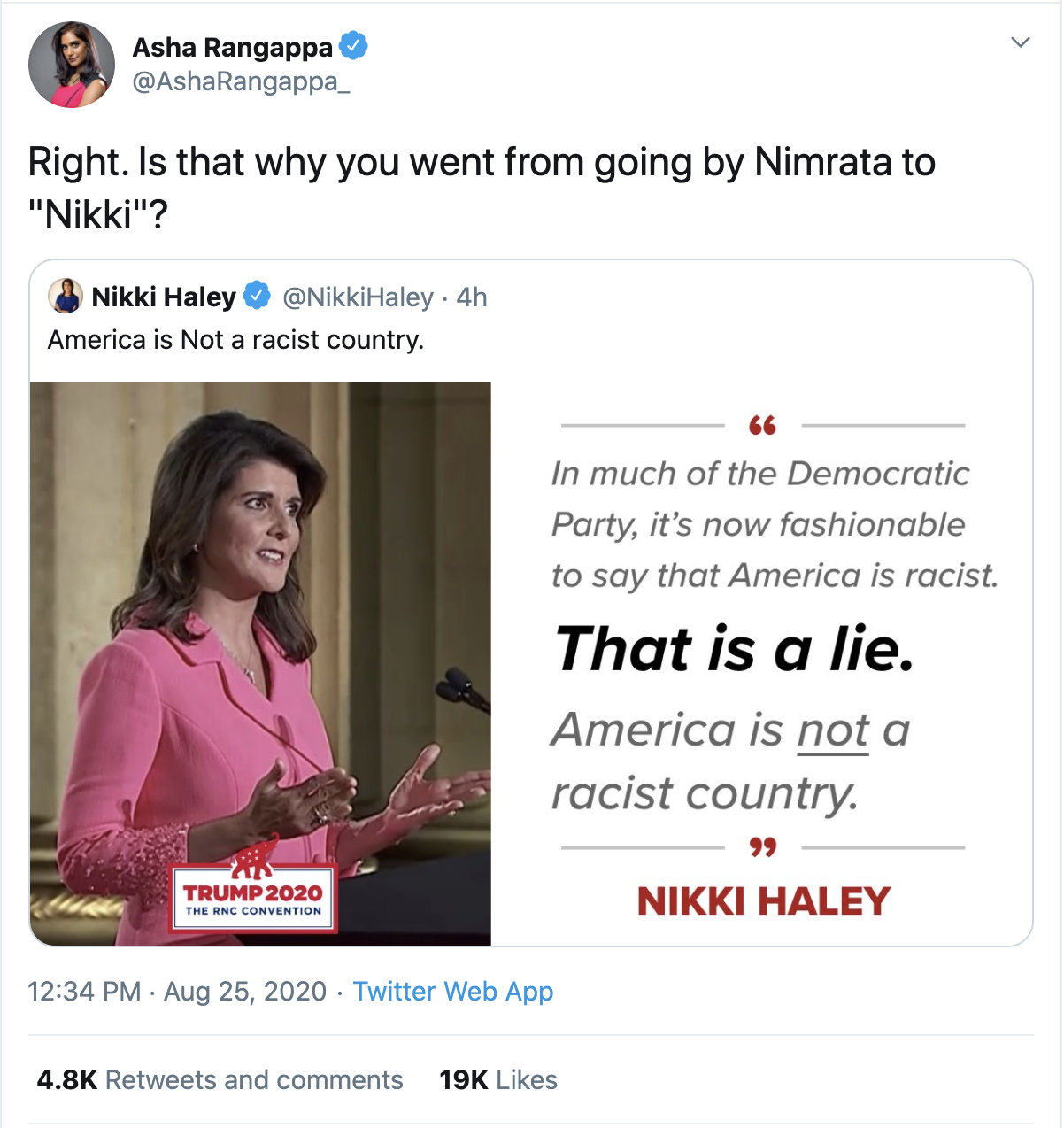 Even when some pointed out that Nikki is a part of Haley’s legal name, as well as a traditional nickname in Punjabi meaning “little one,” Rangappa didn’t budge.

The little girl on the left was born in Bamberg, South Carolina to immigrant parents. They named her “Nikki” which means “little one” in Punjabi. Running as a Republican, @NikkiHaley became the first woman to serve as Governor of South Carolina. pic.twitter.com/Km9FJL4XJA

I hope you did better research when you worked for the FBI than you do when calling people out for the name they go by. Nikki Haley was born Nimrata Nikki Randhawa & married someone w/ the last name Haley. Her family called her Nikki growing up. It means “Little One” in Punjabi. https://t.co/zLEZihFzEr pic.twitter.com/XgI9GC9DsC

“And they generally don’t go by those nicknames in their professional life. In my family “puttu” (little one) and “gundu” (chubby one) are nicknames, but no one would ask people outside of the family to call them that. Please,”  Rangappa replied.

And they generally don’t go by those nicknames in their professional life. In my family “puttu” (little one) and “gundu” (chubby one) are nicknames, but no one would ask people outside of the family to call them that. Please.

South Asians for Biden removed their tweet and issued a statement saying that their group “regrets the tone of the message,” but no apology was made directly to the former South Carolina governor.

Upon further reflection, an earlier tweet drawing attention to the name of Ambassador Nikki Haley has been removed. South Asians for Biden regrets the tone of the message. We will continue to focus on the very real issues facing South Asian voters this election.

Rangappa has not apologized or removed her tweet despite backlash from both sides.

Another racist incident incited by some on the left occurred on Monday night after the RNC. Just minutes after former professional football player Herschel Walker spoke, “Uncle Tom,” a derogatory statement used against black people who are supposedly “obedient” to white people, began trending on Twitter.

Herschel Walker speaks at the RNC and ‘Uncle Tom’ trends on Twitter.

Progressive society I tells ya. pic.twitter.com/nSw6jjmmtl

While Walker made it clear that he takes it as a “personal insult that people would think I’ve had a 37-year friendship with a racist,” people still attacked him.

Bill Barr dropped an ‘unmasking bomb’ — and no one noticed…