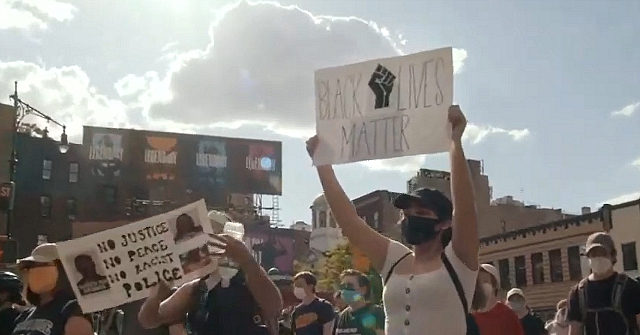 The Democratic National Convention (DNC) kicked off Monday night with the official theme of unity, but it focused primarily on divisive party talking points, dominated almost entirely by race.

Several segments of the DNC’s first convention night focused on racial strife and division — a theme pushed by Democrats in the wake of George Floyd’s May 25 death, which spurred riots and violence against police officers across the country.

Washington, DC, Mayor Muriel Bowser (D) was one of the first to deliver an address, with “Black Lives Matter Plaza” serving as her backdrop. She touted the false “peaceful” protesters’ talking points and invoked her two-year-old daughter, explaining that she wanted her to grow up in an America where the president “doesn’t fan the flame of racism and looks out for all of us.”

“My brother George was selfless. He always made sacrifices for his family, friends, and even complete strangers,” his brother said, praising those “peacefully protesting in the name of love and unity” — a “fitting” legacy for Floyd, he said, listing others who “we’ve lost to hate and injustice.”

They then held a moment of silence.

The convention then played a segment featuring Joe Biden (D) speaking with a group of individuals, virtually, about racial inequality.

“Mayor, how are you prioritizing the many things you have to do as we try to tackle, in a way we haven’t before, systemic racism in the city?” he asked Chicago Mayor Lori Lightfoot (D), who said it is about “economic empowerment.” She did not mention the uptick in violence in her city.

“What I want to see in the next president of the United States is someone who fair. Who believes in equal justice under the law. I want him to lead us through this revolution that we’re experiencing right now,” one voter said.

One man referred to Biden as a “healer” and “unifier” who will “fight for the Black Lives Matter movement,” followed by a woman who called to “undo, remove, tear down, the remnants of structural and systematic racism in this country.”

“Six months ago, I stood not far from here and endorsed Joe Biden to be our 46th president. It was a decision I made with my feet firmly planted in this community — this community — for 80 percent of African Americans in this country can claim an ancestor who arrived on these shores in bondage,” he began, noting that the community is still healing from the white supremacist shooting at Mother Emanuel AME Church.

He also spoke about the removal of the John C. Calhoun statue being removed and praised Biden, referring to him as an “adopted son of South Carolina.”

Failed Democrat primary candidate Beto O’Rourke (D) did not mince words during his appearance at Monday’s virtual convention, bluntly calling President Trump the “most destructive, hateful, racist president in the history of this country, who is literally tearing apart the fabric of the United States of America.”

Sen. Bernie Sanders (I-VT), one of the big headliners of the night, emphasized that the U.S. is “confronting systemic racism” and accused Trump of “leading us down the path of authoritarianism.”

The former presidential hopeful added that the “unthinkable has become normal” during Trump’s first term, declaring that “authoritarianism has taken root” in the U.S. He continued in fanning the flames of racial unrest by repeating the debunked Democrat talking point that President Trump has coddled white nationalists.

“Joe Biden will end the hate and division Trump has created,” he claimed. “He will stop the demonization of immigrants, the coddling of white nationalists, the racist dog-whistling, the religious bigotry, and the ugly attacks on women.”

Former first lady Michelle Obama, the final major speaker of the night, wrapped up the evening in a speech harping on the same themes of racial unrest, mentioning George Floyd and the Black Lives Matter movement.

She said in part:

And here at home, as George Floyd, Breonna Taylor, and a never-ending list of innocent people of color continue to be murdered. Stating the simple fact that a black life matters is still met with derision from the nation’s highest office. Because whenever we look to this White House for  leadership or consolation or any semblance of steadiness, what we get instead is chaos, division, and total and utter lack of empathy.

Obama talked about kids and what she believes they are witnessing in the world under a Trump presidency.

“They see people calling the police on folks minding their own business just because of the color of their sin. They see an entitlement that says only certain people belong here,” she explained

“And they see what happens when that lack of empathy is ginned up into outright disdain. They see our leaders labeling fellow citizens enemies of the state while emboldening torch-bearing white supremacists,” she continued:

They watch in horror as children are torn from their families and thrown into cages, and pepper spray and pepper bullets are used on peaceful protesters for a photo op. Sadly this is the America that is on display for the next generation — a nation that’s underperforming not simply on matters of policy but on matters of character. And that’s not just disappointing. It’s downright infuriating.

“Now, I understand that my message won’t be heard by some people. We live in a nation that is deeply divided, and I am a black woman speaking at the democratic convention,” she continued.

“But enough of you know me by now,” Obama added, urging people to vote for Biden “like our lives depend on it.” 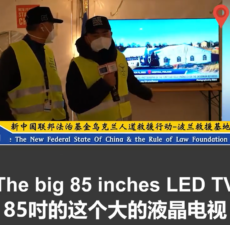 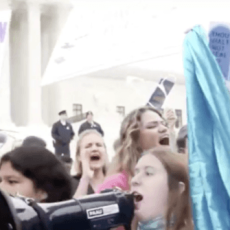