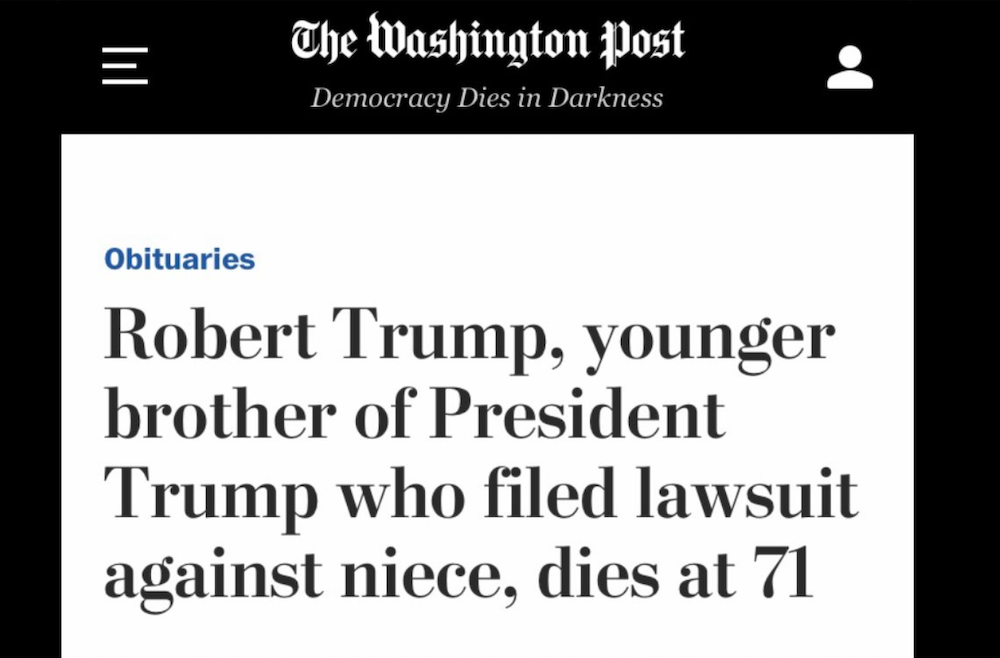 President Trump’s younger brother, Robert Trump, died Saturday evening. In any normal circumstance, the death of the president’s brother ought to elicit respectful sympathy from all. However, we now live in a time when corporate media uses a man’s obituary to criticize his family’s politics.

Regardless of one’s politics, we should all be able to agree that these publications ought not use an obituary for the sole purpose of political commentary. The obituaries from The New York Times, Washington Post, and Associated Press were far more interested in attacking the president than in actual remembrance of a man who died.

Good lord, the @nytimes couldn’t step off of its Trump bashing even when reporting on the death of his brother. https://t.co/TN9aRc35dl Sad.

The New York Times spent a disproportionately large portion of their obituary focusing on what President Trump had been doing on the days leading up to Robert’s death, as if to imply a lack of care. The details of a press conference and the length of the president’s hospital visit are laid out as lurid details highlighting a facial apathy, more akin to gossip than remembrance.

Annie Karni, who wrote the obituary, framed much of the story around any wedges possible between Robert and Donald, highlighting their tensions, differences, and fights both personal and professional, as far back as childhood. When presenting a quote from the president about his relationship with his brother, Karni referenced a period of estrangement between the pair as a fact check to undermine the credibility of a familial relationship.

The article reads: “‘I have a wonderful brother,’ the president said on Friday during a news conference at the White House before departing to visit him. ‘We’ve had a great relationship for a long time, from Day 1, a long time ago.’ In fact, the two were estranged for years, before Mr. Trump’s run for the White House.”

This hyper-focus on using the obituary to attack the president seeps aggressively through the piece. Any praise given to Robert is immediately juxtaposed with negative comparisons against Donald.

The Washington Post published a far more inflammatory and negative headline for the obituary for an American businessman than for the head of ISIS. The Post came under fire last fall for a disturbingly glowing obituary of the Islamic State leader whose development of the terrorist group was charted like the rise of a noble king or general, only making passing references to his brutality until the 40th paragraph.

Robert Trump’s two-paragraph obituary is no better than its negative headline, focusing exclusively on Robert Trump’s political support for his brother and his lawsuit against his niece, Mary Trump, over the contents of her recent book criticizing her family. To the Washington Post, a terrorist deserves contextualization and praise, but an innocent American can be reduced to proximity to a controversial politician and a familial struggle.

It turns out this was from @AP wire service. pic.twitter.com/hMxSct7iBj

The Associated Press used the opening sentence of its eulogy to praise the late Trump while criticizing his brother in an unnecessary reference. The article goes on and on to contrast the brothers, presenting Robert as the kind and good sibling compared to Donald’s charismatic but brash callousness. His goodness is presented entirely in opposition to the left’s perception of the president’s lack of such positive qualities.

Alongside the politicized headlines and articles, Twitter saw #wrongtrump trend in the United States. It spent time as the second most popular trend of the evening, just behind the hashtag for a UFC fight. The vicious and cruel hashtag was meant to express dismay, not at Robert Trump’s death, but that it had not been the president who passed away. 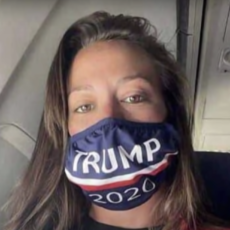