Show-business luminaries led by reality television personality Kim Kardashian are “freezing” their Facebook and Instagram accounts for a day to let Mark Zuckerberg — the principal owner of those social media platforms — that he needs to step up his anti-free speech campaign and remove posts and accounts that spread so-called hate, propaganda, and election misinformation.

The 39-year-old Kardashian — the wife of presidential candidate and rap mogul Kanye West — has 188 million followers on Instagram and over 30 million fans on Facebook. She believes that those platforms are responsible for spreading hate and deceiving many people about the important facts of the news of the day. She is joining the one-day boycott known as #StopHateForProfit.

In a tweet, Kardashian addressed her fans: “I love that I can connect directly with you through Instagram and Facebook, but I can’t sit by and stay silent while these platforms continue to allow the spreading of hate, propaganda and misinformation – created by groups to sow division and split America apart – only to take steps after people are killed.”

Several Hollywood personalities piled on, also promising to do their part to stop hate and misinformation by not posting on Facebook or Instagram for a whole day.

Among those virtue signalers was Mark Ruffalo, who is famous for playing the Incredible Hulk in The Avengers movie franchise. “Facebook makes billions of dollars in advertising while allowing hate to thrive on its platform. It’s time to hold them accountable for its inaction. Today, I am ‘freezing’ my Instagram for 24 hours. Join me and tell Facebook to #StopHateForProfit.”

Other movie actors such as Leonardo DiCaprio, Ashton Kutcher, Olivia Wilde, Jamie Foxx, Sacha Baron Cohen, Michael B. Jordan, and Jennifer Lawrence have also vowed not to log in to their accounts for an entire 24 hours to signal just how much it is that they care about the “spread of hate.”

Corporations have also joined in the attempt to pressure Facebook and Instagram to censor even more speech than they already do. Verizon, Unilever, Ford, and shoe-maker Adidas, along with approximately 1,200 other companies are also staying off the Zuckerberg owned platforms — for a day.

Why just a day? If they were serious about stopping the “spread of hate and misinformation” on Facebook, wouldn’t they just remove their luminous presence from those platforms entirely?

“These stunts are worthless if temporary and short-lived (which they always are),” tweeted Washington consultant Jenna Golden. “If anything, they shine a light on the fact that we cannot live without these platforms since everyone always comes back (brands included.)”

The 24-hour freeze on the accounts is apparently only step one in the campaign, which was started by The Stop Hate for Profit Campaign, which apparently exists only to get Facebook and Instagram to censor voices that dissent from their own. The “freeze” is just one part of their “week of action” in which they intend to shed light “about the harms that Facebook is inflicting on our society.”

The group even offers a “week of action toolkit” for those who might not know how to effectively virtue signal.

After the 24-hour freeze is over, certain celebrities such as Demi Lovato and Sacha Baron Cohen are set to post “educational” messages aimed at youths. The messages are intended to explain exactly how social-media companies spread disinformation, encourage hate speech, and allow extremist groups to form online.

Facebook, of course, is already censoring content from groups that disagree with them politically. PragerU is a prime example. Facebook has already limited the reach of PragerU videos and has threatened to remove them from the platform entirely for “repeatedly” violating the company’s community standards. PragerU never publishes anything offensive or observably false — only things that come from a right-wing point of view.

Just this week, Facebook announced that it would censor any suggestion that Antifa or other revolutionary groups may have had something to do with the wildfires currently raging in the West. Their reasoning? Such “rumors” were diverting “resources from fighting the fires and protecting the public.”

Facebook is clearly on The Stop Hate for Profit Campaign’s side in the culture war. This “freeze” is nothing but virtue signaling. If they were serious, celebrity accounts would be deleted permanently — not “frozen” for a day.

As part of her short treatise on why she was freezing her account, Ms. Kardashian wrote: “Misinformation shared on social media has a serious impact on our elections and undermines our democracy.”

You know what else has a “serious impact on our elections”? Stifling free speech.

James Murphy is a freelance journalist who writes on a variety of subjects. He can be reached at This email address is being protected from spambots. You need JavaScript enabled to view it.. 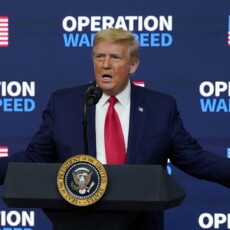 Pinkerton: 6 Things Joe Biden Could Do About Covid if He Is Serious

The Vietnamese Soul Choir is all in for Trump (awesome video)…