Music by:
https://incompetech.com/
Crinoline Dreams
In Your Arms

–Disclaimer–
These are the opinions and ramblings of a foul-mouthed lunatic. They are for entertainment purposes only and are probably wrong. You listen at your own risk.

No child should die like this. Don’t look away. Be brave and spread the word. Only a coward or a criminal would not speak out at this point. No rug is big enough to hide this under. They are killing children now because to many would not look, listen or speak out. If you know and don’t act you are guilty of murder. Think about it.

Banned from YouTube, MSN and GOOGLE search engines. Clearly, they don’t want you to know. A glimpse into the life of former, MERCK Pharma sales executive, turned whistle blower. Brandy Vaughan educates a room of medical practitioners and demonstrates just how corrupt and dangerous Big Pharma really is.

Brandy Vaughan: Silenced By Murder – Vaccines Are So Advantageous That Those Who Expose Big Pharma Are Stalked & Then Murdered!

Maria Zeee guest hosts The Alex Jones Show to break down the civil rights atrocities in Australia done in the name of Covid enforcement.

If you’re in Australia, visit Gold Stackers today to secure your wealth with Australia’s leading supplier of gold and silver bullion:

If you’re in the United States, visit https://link.goldco.com/Maria or call 855-913-0814 TODAY to protect your retirement!

To prepare you and your household for food shortages, access survival supplies and more, visit our partner Survival Supplies Australia via the link below:

If you’re in the United States, prepare for food shortages by heading to Heaven’s Harvest on the link below and use promo code ‘ZEEE’ (with 3 e’s!) for 5% off your order:

To order Z-Flu today, visit the below link, and use referral code MARIAZEEE for 5% off your order:

Maria is a regular contributor to Red Voice Media (RVM), releasing exclusive content each week. Trial a subscription with RVM Premium for just $1 today via this link: 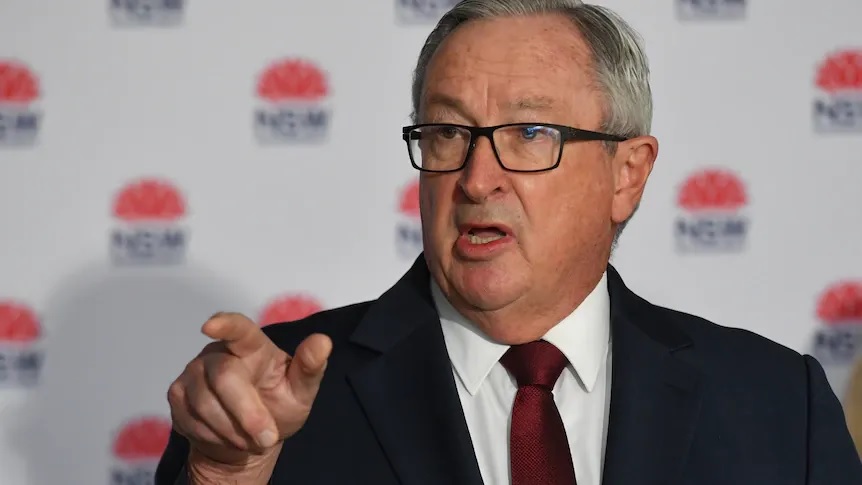 New South Wales Health Minister Brad Hazzard has announced he will be quitting politics. No, that’s not thunder, that’s the sound of New South Wales clapping.

Hazzard’s carry-on during the pandemic was a disgrace.

The former science teacher bullied and belittled the public as if they were recalcitrant students.

Anyone who questioned mask mandates was “a wacko”.

Commentators who questioned government decisions didn’t “base their commentary on any logic whatsoever”.

People who hesitated to get vaccinated were “extremely selfish”. They lived “in another universe” and should “wake up”.

Hazzard was rude, pompous and just plain wrong about so many things.

Many people will be upset that Hazzard leaves public life without being held to account for the way he treated people during the two years of the pandemic.

“If you think you can not have a vaccine just because you don’t want to have a vaccine, well you should think about what you are doing to your family and to the community.

“And I would say even more than that, what a hide you have, what a ridiculous position.”

Hazzard’s nastiness to the unvaccinated was cruel, and based on a Big Pharma lie. People were right to be wary of the jab. It didn’t stop transmission at all.

As recently as December, a smug Hazzard was hectoring people:

“I want to say this. We are still hearing that people are declining to get vaccinated, they know better, they are watching social media, stop, forget it. Get off the social media. Switch off your social media and switch on reality and go and get a booster.”

And he was pushing the jab on kids.

“The mums and dads out there, the best gift you can give your 12-15 year olds for Christmas or New Year is to get vaccinated.”

He even set up a stadium as a vaccination centre for children. Mums and dads were not allowed to go in.

“I want to stress that our children will be well looked after once they are inside. They will be literally ushered… they’ll be looked after every moment. So mums and dads feel secure. The opportunity is there, but really you’ve got to grasp it. Grasp it with both hands.”

Wise parents grasped their children’s hands and took the opportunity to keep them as far from Health Hazzard as possible.

Hazzard oversaw harsh lockdowns, separating families and destroying lives all the while stoking fear of the virus. And yet the fear was massively overplayed.

Three days into 2022, Hazzard was forced to admit that at least 50 per cent of Covid hospitalisation figures in NSW included people in hospital for reasons other than Covid.

For example, a person who went to hospital because they had a broken bone and, incidentally, tested positive for Covid while at the hospital, was recorded as someone hospitalised because of Covid.

Hazzard used those inflated numbers to scold the public for not following directions and for failing to comply with lockdown orders.

Anyway, that’s all Pfizer under the bridge now.

Hazzard is sailing off into the sunset without apology or reckoning.

Ironically, Hazzard’s decision to quit politics came on the same day that a news.com.au survey of 50,000 people found more than half either regretted getting vaccinated, or were unvaccinated and happy with their decision.

Only 35 per cent out of more than 50,000 people polled said they were vaccinated and would make the same decision again.

Not a single person said they were unvaccinated and regretted the decision.

So many “wackos” glad they didn’t listen to Hazzard’s condescension and fear-mongering.

So many dutiful citizens — jabbed once, jabbed twice, jabbed three and four times — who wish they hadn’t listened to Hazzard at all.

Anyway, he moves on now.

Subscribe to his Substack here for daily witty commentary.

On September 22nd CVS pharmacy promoted the COVID-19 booster vaccination program by sharing a Tweet showing CDC Director Rochelle Walensky getting her shot at the national pharmacy chain. [pictured below] 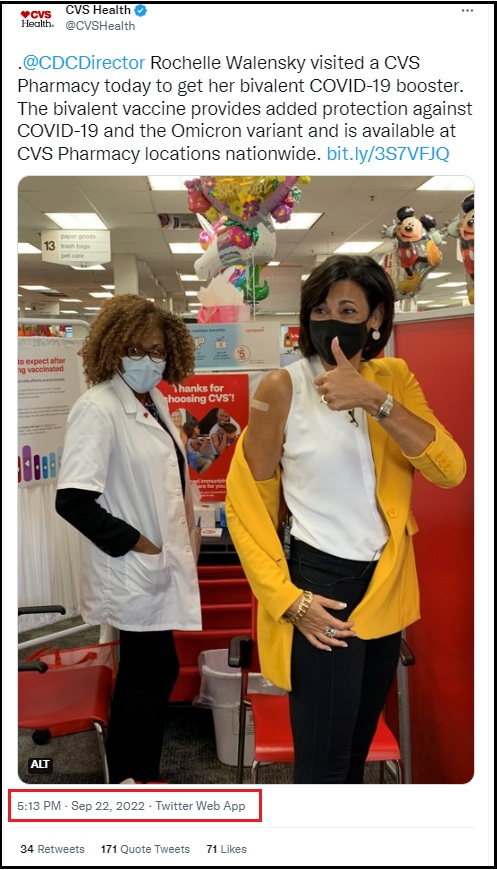 (Via CDC) Last night, CDC Director Dr. Rochelle Walensky tested positive for COVID-19.  She is up to date with her vaccines.  Dr. Walensky is experiencing mild symptoms.  Consistent with CDC guidelines, she is isolating at home and will participate in her planned meetings virtually. CDC senior staff and close contacts have been informed of her positive test and are taking appropriate action to monitor their health. (link)

Unbelievable and infuriating at the same time.  The CDC voted unanimously today (15-0) to include the emergency use authorized mRNA vaccine as part of the childhood immunization schedule, effectively forcing most school aged children to undergo a COVID shot as part of the state requirement to attend school. 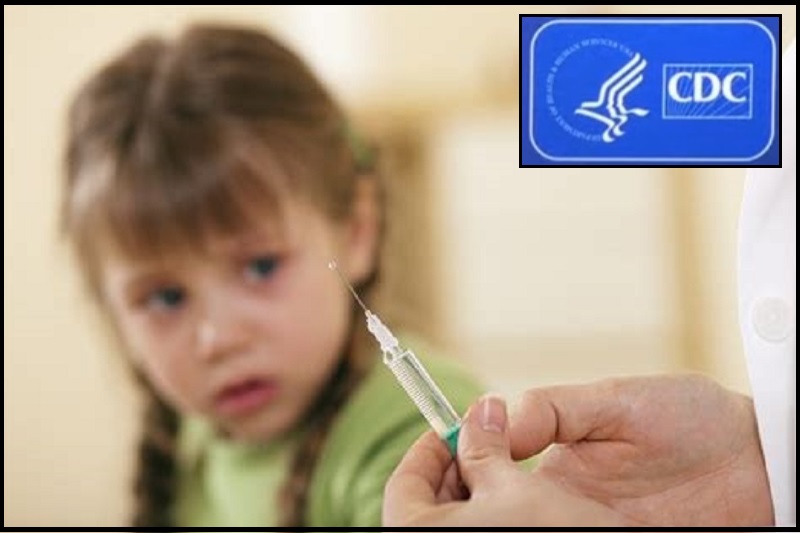 (Via Politico) The CDC’s independent vaccine advisers voted 15-0 Thursday to add most Covid-19 vaccines offered in the U.S. to the childhood, adolescent and adult immunization schedules.

The immunization schedules, which are updated every fall before going into effect the following year, consolidate all of the CDC’s vaccine recommendations in one document for states that use them as guidance for school entry requirements and busy physicians. The additions formalize recommendations the CDC has already made on Covid vaccination in individuals ages 6 months and older for shots that the FDA has approved or has authorized for emergency use.

Covid vaccines’ inclusion on the schedules don’t constitute mandates, particularly for schoolchildren, which are the purview of states, localities or jurisdictions, depending on local laws. Still, the committee’s vote sparked controversy and debate on social media about what the additions mean for vaccine requirements after Fox News’ Tucker Carlson asserted Tuesday that the CDC would trigger mandates for students. 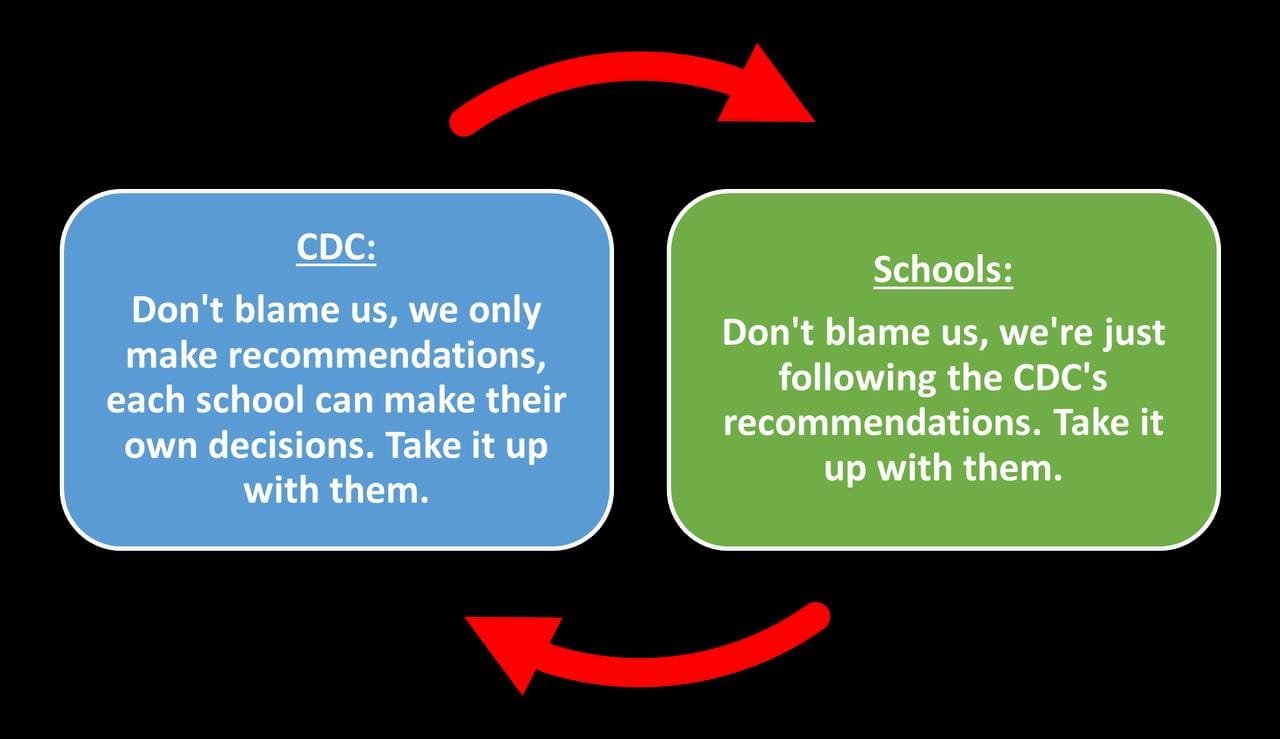 “This doesn’t represent new recommendations. This represents sort of a summary of existing recommendations,” said advisory panel member Matthew Daley, a senior investigator at the Institute for Health Research at Kaiser Permanente Colorado. “But I will acknowledge … there is symbolism in adding Covid-19 to the childhood immunization schedule, and that symbolism is that we view this as routine and that we view this as Covid is here to stay.”

The FDA has approved two messenger-RNA vaccines targeting Covid: The Pfizer-BioNTech primary series vaccine for people 12 and older and the Moderna primary series for adults 18 and older. They’re each authorized for emergency use for children as young as 6 months, and all booster doses — including new formulations designed to target the original coronavirus strain and two Omicron subvariants — are authorized for emergency use. (read more)

It was a unanimous, 15-0 vote. pic.twitter.com/OaPboZgQvk