Our mate Tim Dywer https://rumble.com/user/TimsTruth and our mate Rod Culleton https://www.greataustralianparty.com.au are just hammering home the stupidity of this corporation masquerading as “Government” in Australia & their gestapo goon brainwashed idiots called “police” who enforce the unlawful bullshit. And everyone knows it.
Complying with tyrants has a 100% failure rate people, whatever these tyrants say DO THE OPPOSITE…
All State & Federal Governments are unlawful & illegitimate. Stop doing what they say & take them out.
Neither the Federal nor the State Governments are sovereign bodies:
they are legislatures with limited powers, any law which they attempt to pass
in excess of those power is NO LAW AT ALL it is simply a nullity entitled to NO OBEDIENCE…
https://www.facebook.com/greataustralianparty
https://www.knowyourrightsgroup.com.au
https://www.thecrowhouse.com/home.html
http://www.clra.info
http://www.fnq.cc/property_rights.html
https://www.youtube.com/user/thecrowhouse
https://www.cirnow.com.au/
https://www.australianpatriotradio.com
http://www.advance-australia.com.au
https://larryhannigan.com
https://www.truth-now.net
https://livingintheprivate.blogspot.com/p/home.html
http://noplaceforcorruption.com/index2.html
Download the Constitution FREE: http://www.cirnow.com.au/fileuploads/!!!Original-1900-Constitution.pdf
…
https://www.youtube.com/watch?v=SP_zfx4JA2M

Mirror of: https://www.bitchute.com/video/SZ9QSNHDJ2nJ/
Channel: https://www.bitchute.com/channel/plazma/
Happened 22nd January 2023.
This was quite a scene outside James St restaurant in Hamilton when ⁦
@JustinTrudeau
⁩ and security pulled a classic decoy move with protesters by his car in the back. But he still got an earful from some angry demonstrators (but as one person wrote in comments:
“The protester label has gotten old . Those people represent the overwhelming majority of Canadian sentiment. The days of the Squatter politician are over . These are his eviction notices .”

Arrested protestors in Brazil are being forcibly vaccinated with the Covid shots against their will. The left is now planning to deny conservative Senators and Representatives their seats in Congress and complete their Stalinist takeover.

Almost a thousand political prisoners are being held in the Federal Prisons in Brasilia. The men were sent to Papuda prison, the women to Colmeia penitentiary. “Upon arrival, they are vaccinated against Covid (probably against their will), given a rolled-up mattress without a pillow and a hygiene kit”, Brazil in English wrote.

Well you are quite the trained but not educated smug asshole Mr. Cox are you not? Said “if you are dumb enough to believe the random guy on YouTube (would that be the CEO of Pfizer?) who tells you mRNA vaccines changes your DNA then perhaps that is precisely what you need”… it would appear that as Tiktok influencers, you two have been greatly Covid media and bullshit influenced?

I understand that you and pinky there may be having some problems. Is her hair still pink or has it all fallen out from the chemo? If you are dumb enough to believe that those shit shots they are pumping into you will help you health wise…perhaps that is precisely what you need. After all they have certainly done her some good right?

No tears here. The sooner you die, the less you can help to harm. Get your boosters you vax pushing asshole. You are taking part in a genocide. You are part of why children are being murdered.
Source: bootcamp: https://www.bitchute.com/channel/HcR3pLdZtqqE/ 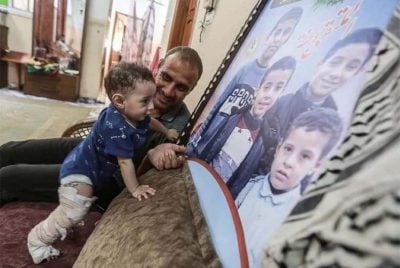 It is surely correct for the UK to proscribe the IRGC under a formal legal process of the  Terrorism Act 2000, as a terrorist organisation, as is now proposed by the British government. However, by the same criteria it must also be right to award such a dubious distinction to the Likud party of Binyamin Netanyahu whose IDF has killed more than 100 primarily unarmed Palestinian civilians since January 2022. That is also terrorism, for a Palestinian Arab is also a human being, just as is an Israeli Jew or an English Christian.

Israeli forces have killed more Palestinians in the occupied territories during 2022 than in any year since 2005 when the second intifada ended, according to Middle East Eye‘s (MEE), which relies on UN, Palestinian, Israeli and rights groups’ data. The report found that at least 220 Palestinians were killed, including 48 children, 167 of them in the West Bank and East Jerusalem and 53 in Gaza. Some 9,000 were injured in the West Bank, MEE stated, citing UN sources. It stated that 95 Palestinian civilians were shot by Israeli troops during raids or while taking part in anti-occupation protests, 21 Palestinian fighters were killed during clashes with Israeli troops; and in the cases of a further 20 people killed in Israeli raids, it was not clear whether or not they were civilians or combatants.

Any armed force that kills unarmed civilians is a terrorist organisation that employs terror as a political weapon; often uses religion as a cover for its terrorist activities.

An individual in an  armed force, or otherwise, who commits an act or acts of violence or threatens violence in pursuit of political, religious, or ideological objectives, including the forced acquisition of another’s land by violence and illegal annexation.

Hans Stehling (a pen name) is a regular contributor to Global Research.

Featured image: A Palestinian child, Omar Alhadeede, the sole survivor of his family, looks at a photo of his brothers, killed by the recent Israeli bombing on Gaza. (Image tweeted by Aya Isleem)