This alien was allegedly found in a container near a military base. It was motionless and the people who recorded it did not really know if it was alive, in a sorry state or already dead.

This film features accounts of other worldly phenomena collected by Brad Steiger during his more than twenty-five years of exploration into the strange and the unknown.
Narrated by Steiger, the film will explore UFOs, E.T.s, impossible fossils, the extraordinary link between UFOs and poltergeists, and the remarkable world-wide phenomenon of the Star People, men and women who appear to bear within their genetic makeup the “seed” of extraterrestrial visitors. Joining Steiger to explain Star People research will be his wife Francie, an internationally known mystic and metaphysical teacher, co-author of the best-selling STAR PEOPLE series.

This documentary aims to demystify the controversial phenomenon of UFOs and offers explosive information about some of the biggest cover-ups of the last century. From Roswell to Area 51, former government officials, astronauts and military experts offer firsthand accounts of their experiences with the unknown.

When you analyse the social science about the importance of dads, it is unequivocal. Dads are vitally important to their children’s success in a myriad of ways.

As George Herbert said, “One father is more than a hundred schoolmasters.” This is not speculation — it is reality.

Joshua A Krisch puts the case well for this in an article titled “The Science of Dad and the ‘Father Effect’“. The subtitle says it all: “There are data-driven reasons why kids do better with a father figure in their lives.” The article is 2600 words long, so I have abbreviated it heavily. Read the full article here.

There’s no question that parenting styles impact a kid’s well-being long into the future. No pressure! But it’s often motherhood, rather than fatherhood, that dominates parenting studies. This leaves the question of how to be a good dad somewhat in the shadows.

So far, we know that kids who grow up with a present, engaged dad are less likely to drop out of school or wind up in jail, compared to children with absent fathers and no other male caretakers or role models.

When children have close relationships with father figures, they tend to avoid high-risk behaviours, and they’re less likely to have sex at a young age. They’re more likely to have high-paying jobs and healthy, stable relationships when they grow up. They also tend to have higher IQ test scores by the age of 3 and endure fewer psychological problems throughout their lives when dads take the role of a father seriously. Altogether, these benefits of having an engaged dad are called the “father effect.”

“When fathers are actively involved with their children, children do better,” says Paul Amato, PhD, a sociologist who studies parent-child relationships at Pennsylvania State University. “Research suggests that fathers are important for a child’s development.”

To a man holding his baby, this may seem like a given. But strange as it may sound, fatherhood is an emerging field of study. Scientists are making up for lost time by finally releasing conclusive data about a father’s effect on his children. Almost daily, academic journals are publishing new data that illustrates how men can both help and hurt their children, and how to be a better dad…

The “father effect” is the umbrella term for the benefits of a paternal presence. Of course, a father’s active participation in the family is always preferable. “There needs to be a minimum amount of time spent together, but the quality of time is more important than the quantity of time,” Amato says. “Just watching television together, for example, isn’t going to help much.”

Fathers are more than just sperm donors, but the DNA sperm carries is important. There is perhaps no greater and more universal father effect than genetic information…

Studies suggest that men who binge drink before conception are more likely to have kids with congenital heart diseases and who abuse alcohol.

Poor dietary choices in men can lead to negative pregnancy outcomes. At least one study suggests that men who are stressed before conception may predispose their offspring to high blood sugar.

“We know the nutritional, hormonal, and psychological environment provided by the mother permanently alters organ structure, cellular response, and gene expression in her offspring,” cellular biologist Joanna Kitlinska, PhD, of Georgetown University, who ran a study on the subject in 2016, said in a statement. “But our study shows the same thing to be true with fathers — his lifestyle, and how old he is, can be reflected in molecules that control gene function.”

Whether early attachment to a baby breeds more serious involvement in the long-term is a matter of debate, but there’s plenty of evidence that it does. In a 2011 literature review on paternal involvement during pregnancy and labour, the authors claim that dads who are actively involved and invested in the baby before they’re born disproportionately remain involved in the child’s life.

And, as numerous studies have shown, more paternal involvement means better outcomes for kids. To foster this connection, some scientists have argued that healthy women and newborns should return home as soon as possible after delivery, especially if the father is not allowed to stay overnight in the hospital.

Being around is one thing; being engaged is another. “The quantity of interaction doesn’t really benefit kids. But if you have more high-quality, engaged parenting that does seem to be positively related to outcomes for children,” Carlson says. Warmth is also a key factor. Fathers who spend a lot of time with their kids but are dismissive or insulting tend to have only negative impacts.

“Low-quality fathering can involve behaving coldly toward one’s children,” says Danielle DelPriore, PhD, a developmental psychologist at the University of Utah. “Insulting them, or engaging in problem behaviours are largely incompatible with being a present and engaged father.”

What Is a Good Father to an Infant and Toddler? 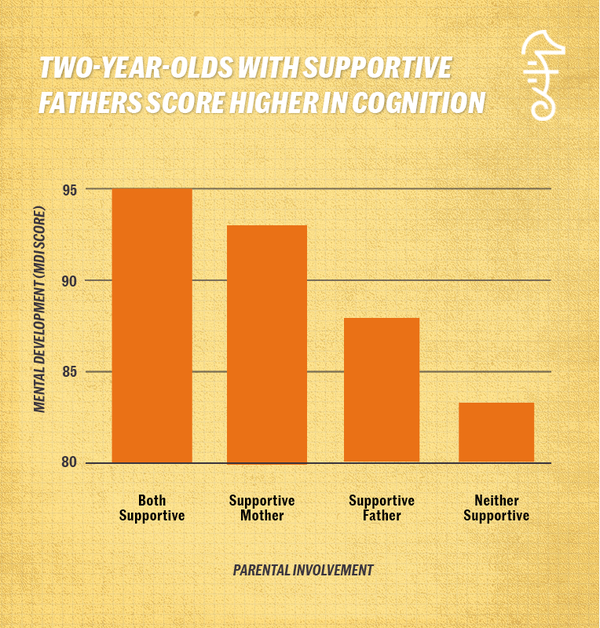 What Is a Good Dad to a Daughter?

Most studies suggest that, until children hit puberty, the father effect is roughly equal for boys and girls. Both boys and girls who are fortunate enough to have dads in their lives excel and, in some cases, outperform their peers. But when hormones kick in, studies demonstrate that dads suddenly become the arbiters of their children’s sexual behaviour too. This is most acutely felt by teenage daughters, who take fewer sexual risks if they have strong relationships with their dads.

“Numerous past studies find a link between low-quality fathering and daughters’ sexual outcomes, including early and risky sexual behaviour,” says DelPriore, who has studied how dads impact risky sex. “A father who is cold or disengaged may change daughters’ social environments and sexual psychology in ways that promote unrestricted sexual behaviour.”

Wow! I have been studying the world of science behind the importance of fathers and even I learnt some things I didn’t know. I am sure you will be encouraged.

Lovework this week is to read the whole article above and put the section about being a good dad into practice. I am still working on it, and I fail regularly but I am not giving up.

Yours for being a Good Dad,
Warwick Marsh

This documentary puts forth the theory that UFOs are actually beings from another dimension, and reviews past incidents of UFO sightings in support of that theory.

If you enjoyed this video and found it interesting, please consider subscribing so as you don’t miss out on future UFO videos.
Please don’t forget to leave your thoughts in the comments box below.

Clear footage of a cylinder/cigar shaped UFO using the clouds as cover as it moves through the sky.

If you enjoyed this video and found it interesting, please consider subscribing so as you don’t miss out on future UFO videos.
I would really like to get your opinion regarding this video, so please dont forget to leave a comment in the comments box below.