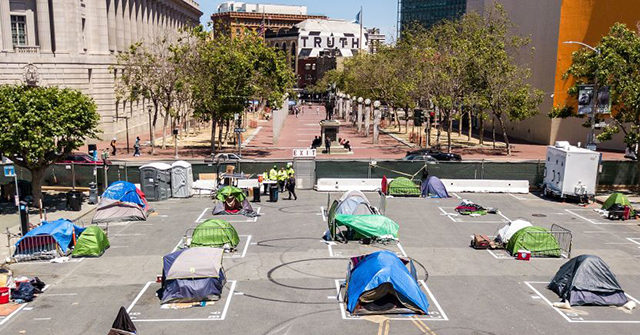 The California Department of Housing and Community Development is using $100 million of the $550 million it got from the federal Coronavirus Relief Fund to put homeless people in hotel rooms or other facilities in San Francisco as a way to allegedly curb the spread of the disease.

The state’s Homekey program announced the millions of taxpayer dollars available as grants to pay for the housing and that the deadline to apply is December 30.

Administered by the California Department of Housing and Community Development (HCD), $600 million in grant funding will be made available to local public entities, including cities, counties, or other local public entities, including housing authorities or federally recognized tribal governments within California to purchase and rehabilitate housing, including hotels, motels, vacant apartment buildings, and other buildings and convert them into interim or permanent, long-term housing.

The additional $50 million is from State General Funds and must be used by June 30, 2022, according to the website.

The San Francisco Chronicle reported on the bay area participation in the government handout:

As the coronavirus crisis stretches on and many hotels remain shuttered, some antsy owners are becoming more open to the idea of selling rather than hanging on to see how long they can survive the crippled economy. In hyper-expensive San Francisco, where plummeting tourism has led to 40% of the hotels temporarily closing, some owners might feel more confident than those in other regions in recovering financially once the pandemic eases.

But it doesn’t mean they’re not thinking about selling, officials said. San Francisco homeless policy leaders have said since early summer they are hoping to buy two or more hotels for conversion, and some leading players in the city’s Homekey process say several properties are in play.

The challenge, they say, is finding buildings that don’t need prohibitively expensive updating — in-unit bathrooms, disabled access and the like — whose owners are willing to sell at a fair price. All of that is no small ask, considering that while rents have dipped significantly during the pandemic, real estate prices have not. Then there’s the follow-up cost. Overseeing a supportive housing operation costs about $30,000 a year — per person — so a modest, 50-unit complex alone would require $1.5 million a year.

The Chronicle reported that the state has received about 100 initial applications so far, according to Gov. Gavin Newsom’s (D) office.

“If we can’t find willing sellers, we should consider addressing this major problem by eminent domain,” Ronen said. “Homekey is a solution, but we need much more like it. We have to do everything we can.”

San Fran school board president mocked for her stupidity…

Genocide plan about to kick in?