After Sen. Rand Paul was mobbed by protestors as he left the White House on the last night of the 2020 Republican National Convention Thursday, members of the media and verified Twitter users vocalized their their thoughts on why the attack on a sitting US senator was justified.

Protestors harassing Paul and his wife screamed about Breonna Taylor, demanding that he “say her name,” all while ignoring the fact that it was Paul himself who introduced the “Justice for Breonna Taylor Act,” which prohibits law enforcement from using no-knock warrants.

While the mob was clamoring for Paul, who later said in an interview on Fox News that it was “horrific” and that he feared for his life, he expressed his gratitude to the DC Police Department for protecting him and his wife for “literally saving our lives from a crazed mob.”

Just got attacked by an angry mob of over 100, one block away from the White House. Thank you to @DCPoliceDept for literally saving our lives from a crazed mob.

Sen. Paul’s gratitude for the police, however, did not go over well with some verified users on Twitter, many of who refused to denounce the actions of the chaotic crowd.

Many of them disputed the fact that Rand Paul was attacked, claiming that the protests did not actually “touch” or physically harm him and that he was just “briefly uncomfortable.”

Just to be clear, Rand Paul wasn’t attacked. He wasn’t touched. No one came at him. In fact, he caught a police officer who tripped over himself.

Save your fake outrage.

No one should physically attack Senator Rand Paul.

Good news. Nobody did.

Attacked is when you are lying in bed in your state of KY and the police come in and kill you.

Confronted is when you enable a Putin installed dictator to overthrow our democracy, and peaceful protestors call you out for it.

Executive producer of “Full Frontal with Samantha Bee” said he is “OK” with the attacks.

In a protest movement this large, it’s nearly impossible to control the tone. There’s no central leadership – that’s an issue. I agree optics are important and I’m not OK with violence, but I am OK with Rand Paul being made to feel briefly uncomfortable.

A Zagat food editor weighs in:

you’d think Rand Paul, whose neighbor once beat him to a pulp over lawncare, would know the difference between getting attacked vs getting jostled

Others condoned or justified the mob’s actions, claiming that Paul’s political track record gave the horde the right to harass him.

Emmett Till, a 14-year-old black kid, was falsely accused of grabbing a white lady’s skirt. He was lynched by an angry mob of white supremacists.

Rand Paul, a 57-year-old white Senator, refused to sign the Emmett Till anti-lynching bill. He was jeered at by a crowd of Americans.

How about, instead of hysterically condemning protests, it might be worth seriously considering WHY they’re so angry?

It’s obviously not just about Trump’s odious personality or white people or bad cops—it goes way beyond that.

And Rand Paul, a smart fella, should know that.

It’s true Rand Paul sponsored the Justice for Breonna Taylor Act. It’s also true that the D.C. residents confronting him have no representation in the Senate to lobby for its passage, & that in his 7 yrs on the subcommittee that oversees D.C., he’s consistently opposed statehood.

Rand Paul is the reason the Emmit Till Anti-Lynching Act hasn’t passed.

I love this. Every Kentucky politician should have to explain why breonna Taylor’s killers have not been arrested.

Plus, Rand Paul is terrible.

And Congress has still hasn’t passed the Emmett Till Anti-Lynching Bill because of Rand Paul.pic.twitter.com/451gA2peug

I’m sure Team @realDonaldTrump was thrilled with footage of protesters hassling @RandPaul as he left the WH political extravaganza last night.
They’re counting on such scenes to power their “law and order” meme.

President of The Appeal and host of the Justice in America podcast Josie Duffy Rice deleted this tweet showing her approval of the mob’s actions. 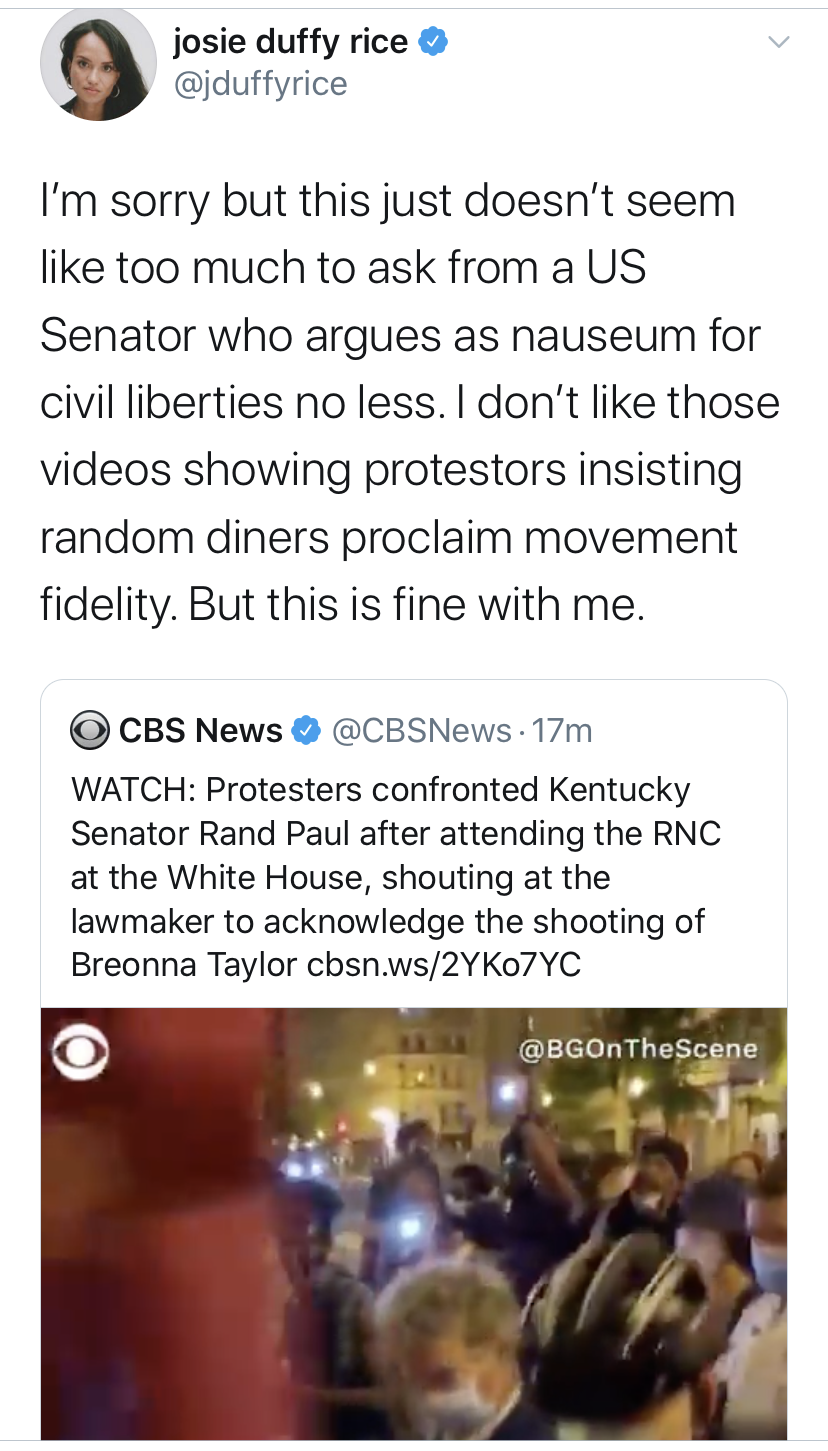 Name-calling was also present in the long list of tweeted criticisms.

When we elect Joe Biden, even traitors to our democracy like Rand Paul will be safe. https://t.co/hLIYxgDAX1

Rand Paul, as an elected leader, is literally scared of the American people. That’s pathetic.

Rand Paul is a pussy who is all about standing up to oppressive government “but not me, though” 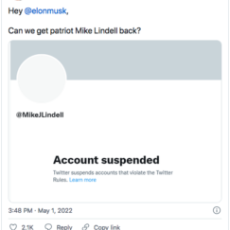 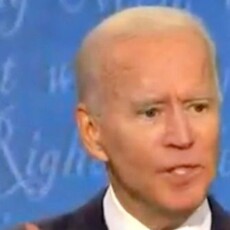 Joe Biden in September: I will Not Declare Victory Until the Election Is Independently Certified