An analytics firm bankrolled by billionaire Michael Bloomberg is predicting that while President Trump will appear to win on November 3, Democrat Joe Biden will actually win the election days later due to mail-in voting.

Josh Mendelsohn, the CEO of Hawkfish — funded by Bloomberg and currently working for various pro-Biden super PACs — told Axios that his firm predicts a “red mirage” where Trump wins on election day but Biden wins the election days later when mail-in votes are counted:

The reason we talk about a red mirage is in fact because we believe that on election night, we are going to see Donald Trump in a stronger position than the reality actually is. We are sounding the alarm and saying that this is a very real possibility, that the data is going to show on election night an incredible victory for Donald Trump. That is likely to be what we see.

Mendelsohn claims it could take weeks before Trump’s election night victory is chipped away at by mail-in votes that will show Biden as the winner. 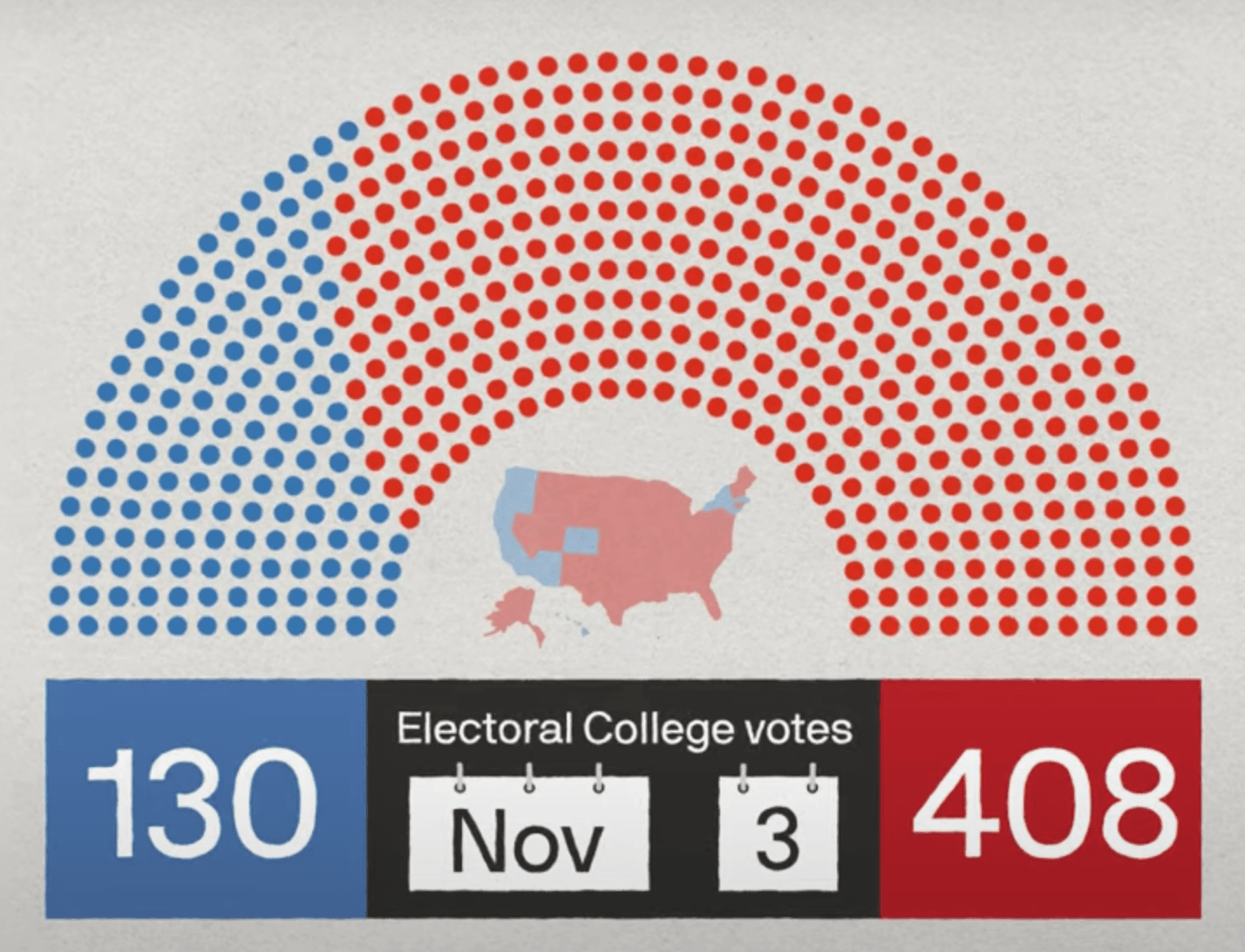 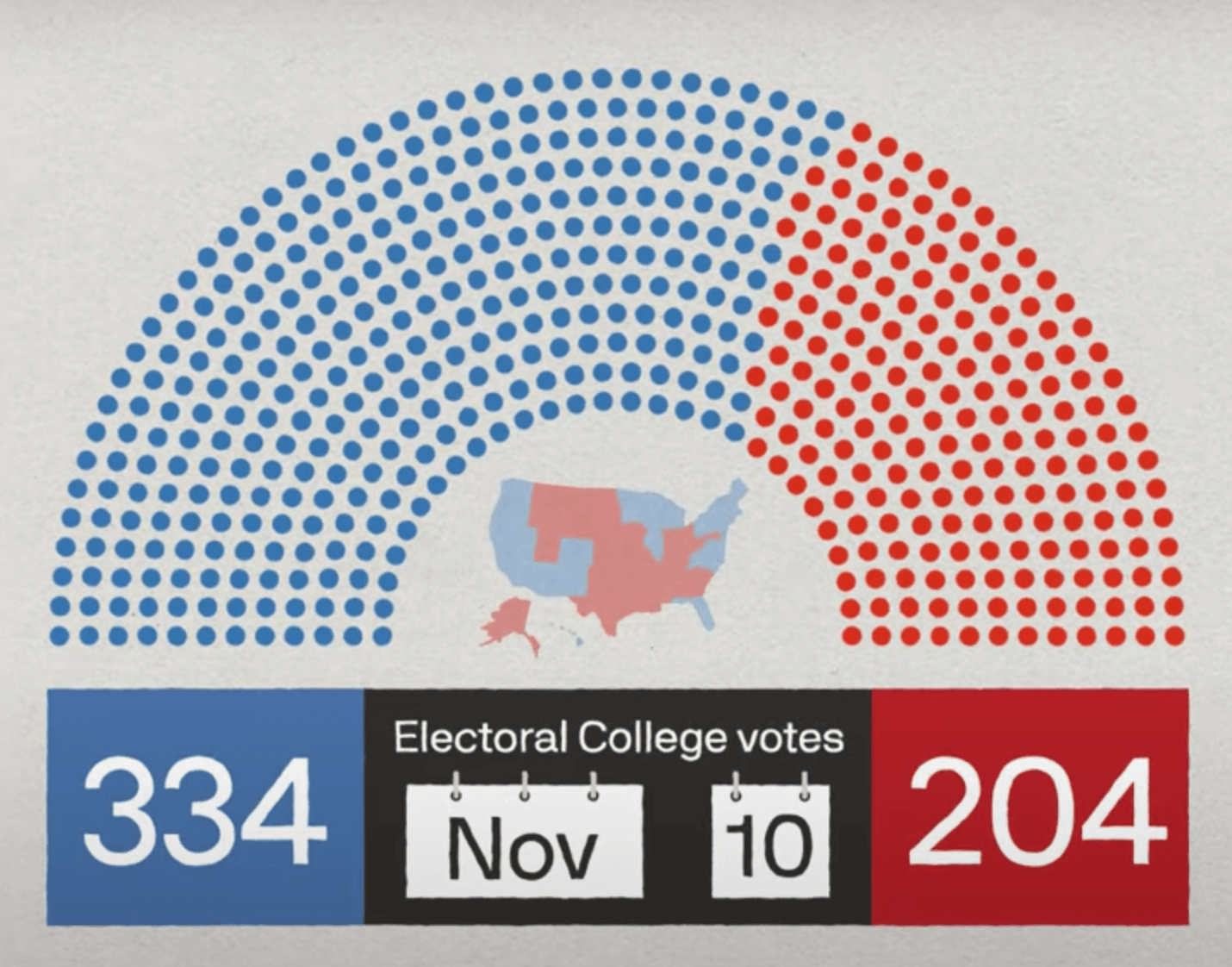 This scenario by Bloomberg’s Hawkfish predicts Trump will win in a landslide on election night. Days later though, the firm says Biden will win the election thanks to mail-in voting. (Screenshot via Axios on HBO)

After 75 percent of mail-in votes are counted, days and potentially weeks later, Hawkfish’s models predict the race may flip to put Biden in the lead. This particular model has Biden with a blowout victory of 334 electoral votes to Trump’s 204. Mendelsohn said:

When every legitimate vote is tallied and we get to that final day, which will be Sunday after election day, it will in fact show that what happened on election night was exactly that, a mirage. It looked like Donald Trump was in the lead and he fundamentally was not when every ballot gets counted.

Hawkfish’s claims come as a Democrat operative detailed large-scale mail-in voting fraud conducted for years by him and staff in states like New Jersey, Pennsylvania, and New York. Part of the operation includes rigging elections for Democrats through paying homeless voters off, taking advantage of the elderly, posing as registered voters, and printing up fake ballots.

Democrats have fought to implement universal mail-in voting, where every registered voter on state voter rolls is mailed a ballot unsolicited, though many efforts are being challenged in court.

Last month, the Trump campaign filed suit against Nevada for their universal mail-in voting plans that would allow votes submitted after election day to count for the election. More than 223,000 mail-in ballots sent to registered voters in Las Vegas, Nevada, for their June primary bounced as “undeliverable” — 17 percent of the total 1,325,934 mail-in ballots that were sent out in the county.

Currently, Democrats are fighting in Pennsylvania to ensure mail-in votes received after election day are counted.

Primary elections held in crucial swing states like Wisconsin have revealed major issues with mail-in voting. Data from 11 cities in Wisconsin, published in May, shows that at least 30,000 mail-in votes were counted after election day.

Recent data has not shown a compelling public health justification for mail-in voting. In Wisconsin’s April election, only 52 of more than 400,000 voters and poll workers were confirmed to have contracted the Chinese coronavirus. None of those cases were fatal. This equals an infection rate below two-hundredths of one percent. 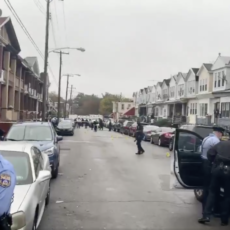 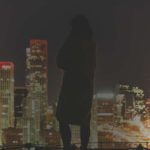 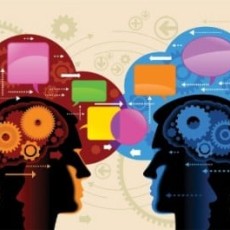 Staking Out Strands of the Web. “Who is Offering the Bribes and Enforcing the Threats?”