El Salvador’s bitcoin bond is a contributing factor to a slide in its dollar-denominated debt, but not the sole reason.

El Salvador’s dollar-denominated debt has taken a beating in recent weeks, with observers blaming President Bukele’s plan to issue bitcoin bonds for the sell-off. But there’s more to the decline than meets the eye.

“Salvador’s bond spreads to comparable U.S. treasuries have widened, and the bitcoin bonds are a contributing factor, but certainly not the only one,” Marc Ostwald, chief economist at London-based ADM Investors Services International, said in an email. “There has been a sharp widening of spreads between the emerging market bond yields and Treasury yields in the past two weeks and an uptick in yields on investment-grade and high-yielding bonds.”

Having adopted bitcoin as a legal tender in September, Bukele on Nov. 20 announced plans to build a “Bitcoin City” funded by the sale of a $1 billion bond carrying an annual coupon of 6.5%. Half of the funds of this so-called “volcano bond” will be used to accumulate bitcoin and the rest will be used for infrastructure and bitcoin mining powered by geothermal energy.

Since the announcement, El Salvador’s dollar bond maturing 2032 has slid from its high in May, sending the yield – which moves in the opposite direction to the price – above 17% from 6.3%, according to data provided by Boerse Frankfurt. That’s widened the spread above the 10-year U.S. Treasury note to more than 1,300 basis points from 480 in May. The country’s debt has begun trading in distressed territory, meaning it’s a security in default or likely to default. 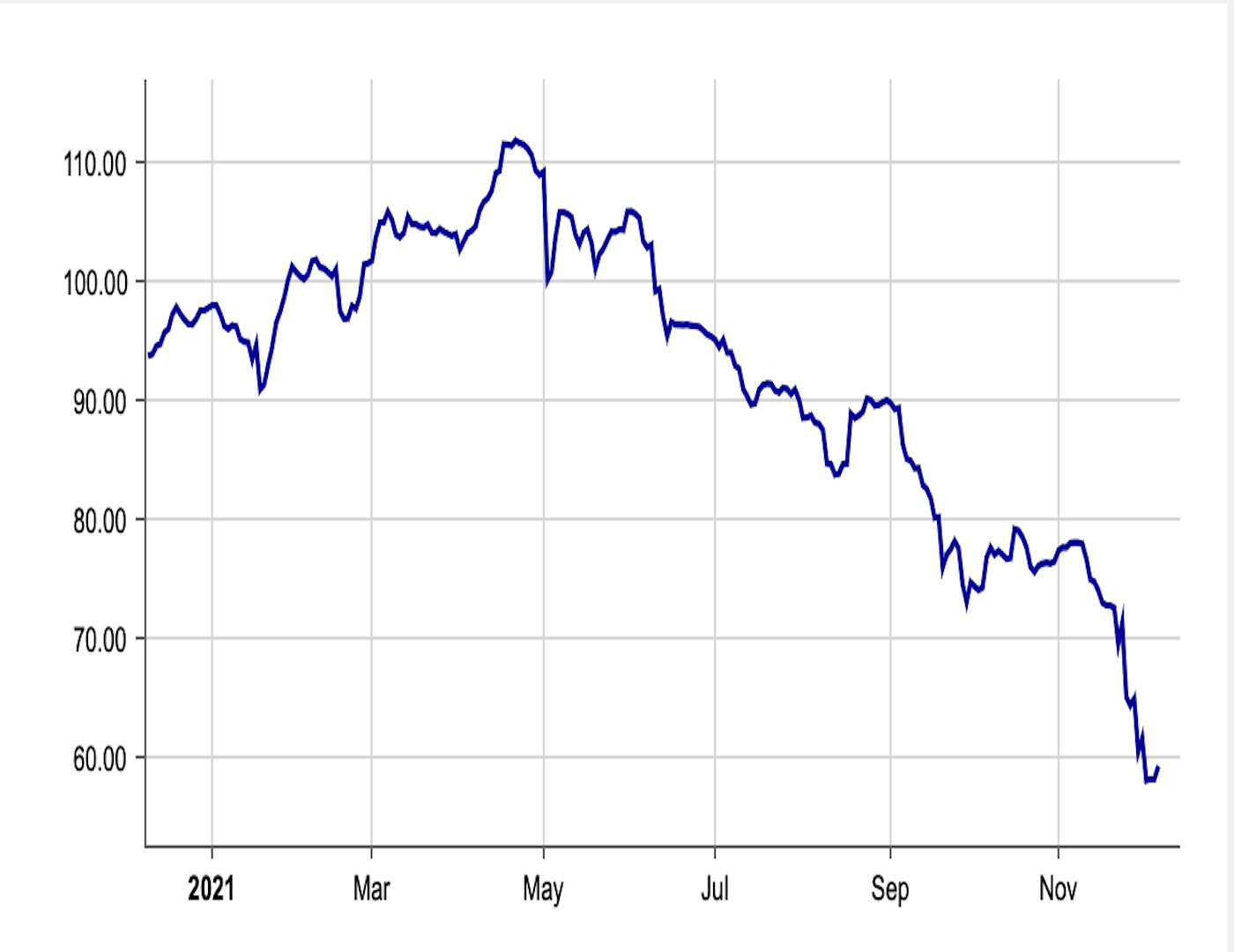 To many observers, the widening of the spread over Treasuries, which are regarded as haven investments, perhaps represents investor concerns that El Salvador’s increasing adoption of bitcoin will distance the country from the $1.3 billion loan agreement with the International Monetary Fund (IMF). The highly indebted nation needs to reach the agreement with the IMF to access international markets ahead of major dollar bond payments due in 2023.

That said, the decline in El Salvador’s bonds also appears to be a part of a macro trend, as noted by Ostwald. 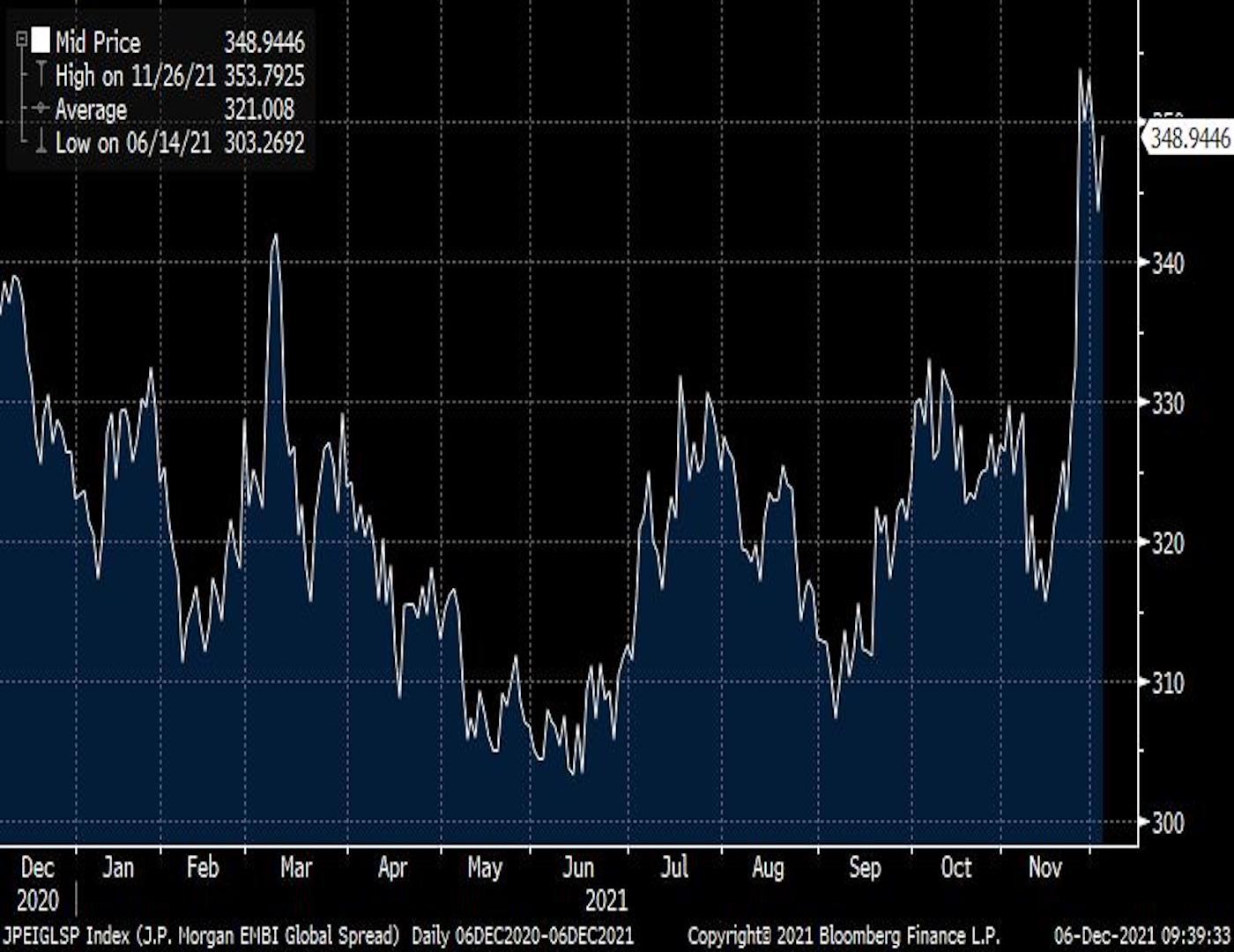 The gap between emerging-market bond yields and corresponding Treasury yields has doubled to 350 basis points in the past two weeks, as indicated by JPMorgan’s Emerging Market Bond Index Global Spread.

Demand for riskier assets has declined since Thanksgiving Day in the U.S., with a potentially more infectious COVID-19 variant sparking concerns of another wave of illness and renewed lockdowns, which could push major economies into stagflation – a situation characterized by low growth and high inflation.

To complicate matters, the U.S. Federal Reserve recently said it will be focusing more on restraining inflation and less on growth, forcing markets to price in the greater probability of a faster unwinding of crisis-era stimulus.

Looking ahead, the pain for Salvador’s dollar-denominated debt could worsen with bitcoin’s latest price slide. The cryptocurrency fell sharply over the weekend, hitting lows under $43,000, and was last seen trading near $51,100 – down 35% from the record high near $69,000 reached on Nov. 10. 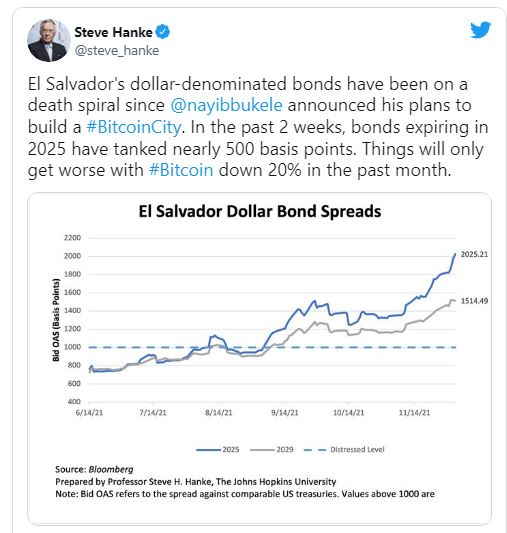 The attractiveness of El Salvador’s bitcoin bonds (ability to raise money) is tied to the cryptocurrency’s price prospects. That’s because by using half of the bond sale proceeds to purchase bitcoin, the government will be giving investors a share of the cryptocurrency’s possible price rally. According to Blockstream projections, the annualized yield could reach 146% in the 10th year, assuming the cryptocurrency rallies to $1 million in the next five years.

Invest in a new global currency Our World Coin that is built to free humanity. Our World Coin is initiative by the people for the people, a force for good & a peaceful revolution, to remove the corrupted Globalist’s control over our nations. For more details, visit https://www.ourworldcoin.org/ 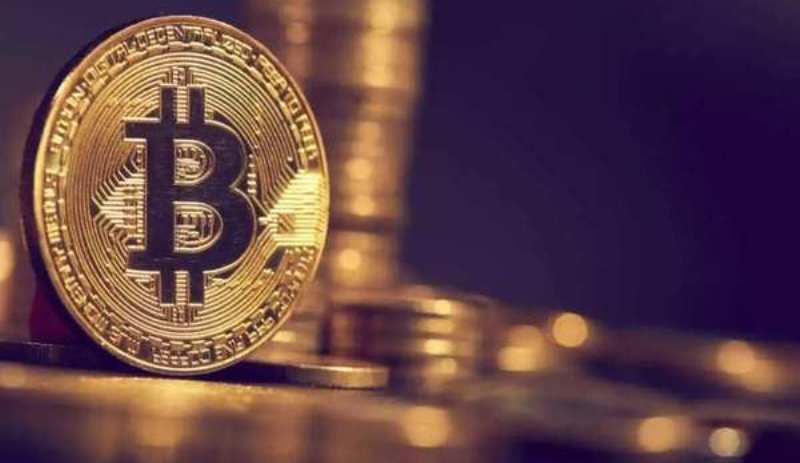 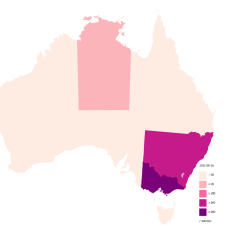 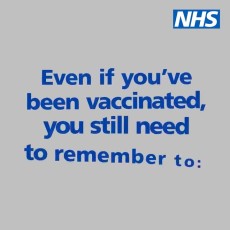 The Evidence – You Stayed at Home, To Protect the NHS, but They Gave Midazolam to the Elderly and Told You They Were C0VID Deaths