If you spend any amount of time on Youtube watching videos related to politics, inevitably, this video has probably shown up in your recommendations at some point in time. It’s from Newsroom, back in 2012, and it has more than 19 million views.

This is just one version of it, of course — there are several others with views in the millions — but it’s popular because it’s a real classic of the genre of the “Jerk Store” leftism favored by its author, Aaron Sorkin.

Sorkin’s classic put-downs are everything a smart lefty parent wishes they had said in the moment they started losing the argument with their irritating nephew about carbon offsets. As for the Newsroom speech itself, Jeff Daniels credits it with saving his career, and he’s very proud of it:

“That was the speech I had been waiting 35 years to do,” he said. “You have to hit a home run with it. It was shot on day three of an 18-day shoot for the pilot. There was no guarantee we had a series. People bigger than Aaron Sorkin had gotten turned down by HBO. This was a key day because not only are we going to find out do we have a Will McAvoy, but do we have a show. Because this is placed in the first five minutes of the first episode when America is still sitting there with the remote deciding whether they want to stay with this or not. So we have to throw a knockout punch to them in the first five to 10 minutes.”

Top network executives came to the taping that day, Daniels recalled, along with a number of the cast. “Sam [Waterston, who played Charlie Skinner] later said, ‘I just wanted to see if I was going to have a job or not.’ It was all on me,” Daniels said. “I worked my ass off on it. First take, I hit it out of the park. I know that because Aaron walked over to me after take one and he goes, ‘OK, you’re pitching a no-hitter. I’m not going to talk to you.’ And he walked away. That was great. Then I knew I had a role, I pretty much — with Aaron’s help — saved my career and that everyone had a job.”

In a sense, everything about the left’s failures of the past decade can be connected back to this speech and what it represents. It was meant to serve in part as a rebuttal to Sorkin’s own optimism expressed through The West Wing and it’s “what if we could have a leader with the skill of a Clinton and the prestige of a Kennedy uplifted by a morally upstanding Catholic faith” fan-fiction — an approach which spawned a thousand Tracy Flicks who have no idea what persuasive political debate sounds like.

One of the nagging things about Martin Sheen’s President Bartlet was that he never really won debates — he just shamed and lectured people with his superior knowledge and unobjectionable character — until the musical crescendo came in and then things moved on. His literal first appearance in the premiere episode in 1999 (with his booming voice saying “I am the Lord your God”) is to correct a social conservative lobbyist who misstates one of the Commandments, because why would any conservative Christian actually read the Bible.

Where Sheen’s Bartlet was the world as Sorkin and his fellow pro-Clinton lefties wished it would be in the Bush era, Daniels’ McAvoy is a response to the world Sorkin and other disaffected Obama supporters felt had become reality post-Bush.

In both cases — the lecturing president, the hectoring newsman — Sorkin’s depiction is not in any way how politics works. If you go this route, you don’t get progress. You just get clapter. Sometimes even in book form.

But! But… it seems to be the way that Jen Psaki, Jake Sullivan, and a host of White House and Congressional staffers, frustrated by the intransigence of those crazy Republicans in the Obama years, really do believe to be the way politics works. Just as in Sorkin’s universes, the naive idiots who don’t know what’s good for them, the deplorables of the right, and their combined elected representatives are defeated not through the hard political work of persuasion, but by crafting the best insult. It’s natural to call them “stupid SOBs”. It gets applauded by all sorts of people. And deep down, it feels good

What it doesn’t do is convince anyone at all that you are right. It might even convince them that if insults are the only argument that you have, it’s a sign you’re very wrong.

Benjamin Domenech is the publisher of The Federalist, host of The Federalist Radio Hour, and writes The Transom, a daily newsletter for political insiders. He was previously a fellow at The Manhattan Institute and a senior fellow at The Heartland Institute; editor in chief of The City; and a speechwriter for HHS Secretary Tommy Thompson and U.S. Senator John Cornyn of Texas. He co-founded Redstate and co-hosted Coffee & Markets, an award-winning economic podcast. His writing has been published in The Wall Street Journal, The New York Times, Politico, Commentary, Reason, and GQ, and he is a Fox News Contributor. He lives with his wife and daughter in Virginia. Email him at ben@thefederalist.com

Message from the President… Developing 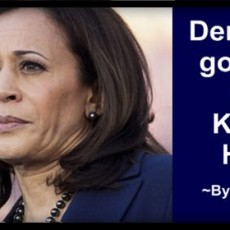 Democrats got stuck with Kamala Harris NOT because she’s talented…