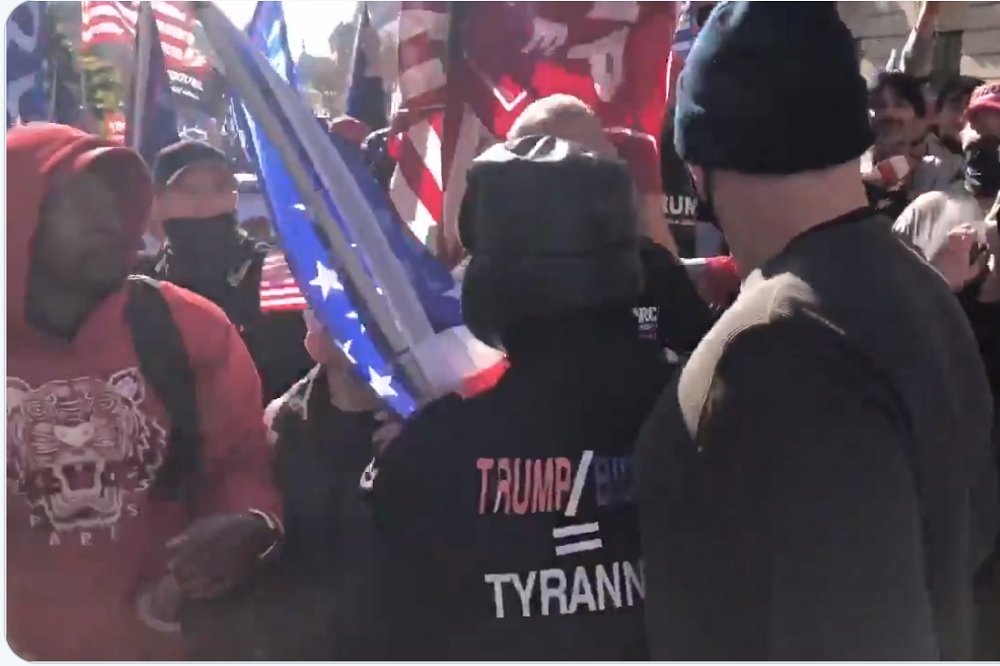 In the evening hours after the “Million MAGA March” to support President Trump in Washington, DC Saturday, leftist Antifa and Black Lives Matter-marked groups assaulted Trump supporters in the streets.

Early in the day, a large crowd of BLM-antifa counter protesters, prepped in riot gear, marched on the streets of DC carrying a banner with the anarchy symbol that also said “punch MAGA in the face.”

Large crowd of antifa march on the streets of DC after the #MillionMAGAMarch. They chanted about burning things if they don’t get what they demand. pic.twitter.com/WFVaD8LxNg

Once BLM and Antifa got to the Trump supporters, tensions rose. A line formed between the two groups as MAGA marchers chanted “check your privilege.” There were several confrontations during the MAGA March between BLM-Antifa and the Trump supporters.

Scuffle breaks out this morning after an anti-Trump protester confronts large crowd of men at the #MillionMAGAMarch in DC. Video by @FordFischer: pic.twitter.com/RE68tc0hih

Most of the violence occurred in the evening, when the MAGA March died down and the Trump supporters began heading home.

Here you can see BLM and Antifa steal an American flag from woman trying to leave the march. After stealing the flag, BLM-Antifa rioters broke it and sharpened the stick to make a spear.

One MAGA march woman was punched in the head from behind. In another instance, BLM and Antifa attacked a family with three children as they tried to leave downtown DC.

A family with children are in tears as they are followed and harassed by antifa. #MillionMAGAMarch pic.twitter.com/Kb8f2sJ1e5

In this video, a young couple was followed by a massive BLM-Antifa crowd who hit them and threw liquid on them as they tried getting away.

Young couple in DC followed by crowd of BLM-antifa thugs who hit them and throw liquid on them. #MillionMAGAMarch pic.twitter.com/Lqo4evvviK

A man leaving the march was knocked to the ground by BLM-Antifa rioters. He was later carried away by Trump supporters while blood poured from his nose. The BLM-Antifa agitators reportedly tried stealing the man’s phone as well.

Brutal assault by a violent armed group who was later arrested for assault and illegal weapon (firearms and concealed knives) charges. pic.twitter.com/vuj2Hn6hj5

Things escalated further once night fell. President Trump wrote on Twitter: “Radical Left ANTIFA SCUM was easily rebuffed today by the big D.C. MAGA Rally crowd, only to return at night, after 99% of the crowd had left, to assault elderly people and families. Police got there, but late. Mayor is not doing her job!”

Radical Left ANTIFA SCUM was easily rebuffed today by the big D.C. MAGA Rally crowd, only to return at night, after 99% of the crowd had left, to assault elderly people and families. Police got there, but late. Mayor is not doing her job!

After dark, BLM-Antifa assaulted an elderly Trump supporter, knocking him off his bike and pouring liquid on him. As the man got up to leave, the BLM-Antifa rioters continued harassing him, pouring the liquid on him, swearing at him, and chanting “black lives matter.” “You better run, mother f—ker” one rioter yelled as he left.

A older Trump supporter on a bicycle was knocked down and had liquid dumped on him by BLM-antifa rioters in DC. pic.twitter.com/juPwidaO8y

BLM-antifa rioters attack people eating near BLM Plaza in DC. They throw an explosive mortar and other projectiles at them. Video by @Julio_Rosas11: pic.twitter.com/kDqiOObhum

There is some footage of MAGA marchers in DC fighting back against BLM and Antifa. Trump said of his supporters fighting back: “ANTIFA SCUM ran for the hills today when they tried attacking the people at the Trump Rally, because those people aggressively fought back. Antifa waited until tonight, when 99% were gone, to attack innocent #MAGA People. DC Police, get going — do your job and don’t hold back!!!”

Antifa and BLM also destroyed a number of pop-up MAGA merchandise shops. In another video a number of rioters can be seen torching a pile of stolen Trump hats.

Toward the end of the night, a group of Trump supporters sang the national anthem in front of the Willard Hotel in DC. Later, a few MAGA marchers waved their Trump “law and order” flag along Pennsylvania Avenue outside the Trump Hotel. 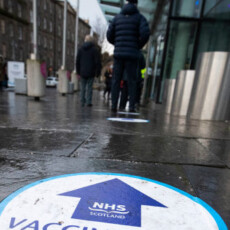