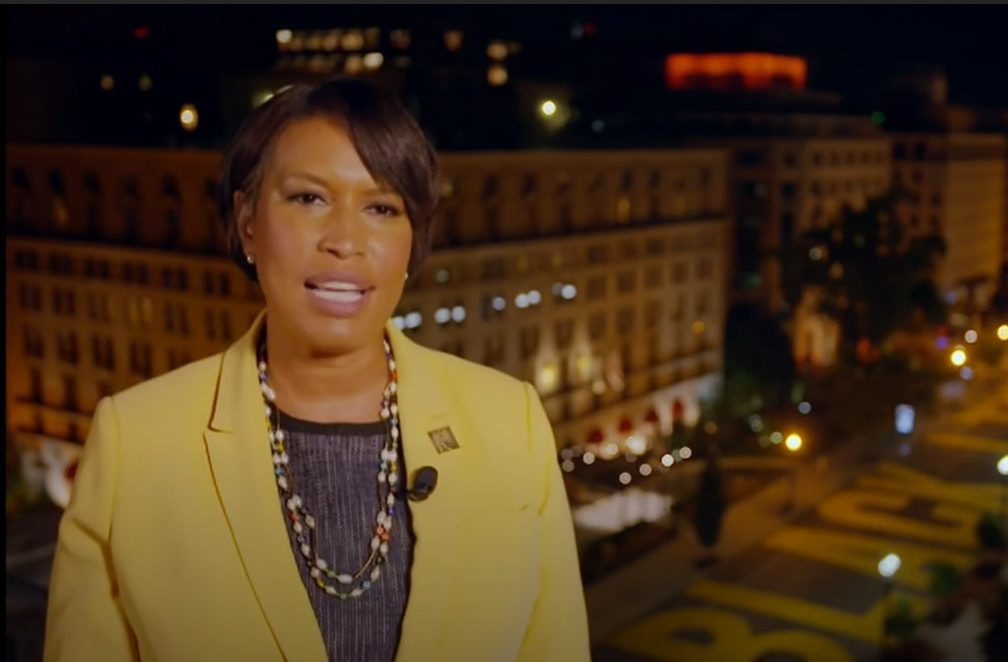 Washington, D.C. Mayor Muriel Bowser addressed the Democratic National Convention (DNC) Monday night, praising the “peaceful protesters” in front of a backdrop of Black Lives Matter Plaza. These are the same protesters who ransacked the nation’s capital earlier this summer and who the legacy media claimed that federal law enforcement officers had tear-gassed.

“While we were peacefully protesting, Donald Trump was plotting,” Bowser said, painting the president as a despotic emperor deploying agents of an American Gestapo to quell the worst outbreak of civil unrest to break out in the capital district in decades. “He stood in front of one of our most treasured houses of worship and held a Bible for a photo op. He sent troops in camouflage into our streets. He sent tear gas into the air and federal helicopters.”

D.C. Mayor Muriel Bowser makes a DNC appearance from Black Lives Matter Plaza and says she had it painted so it would be “a place where we can come together to say ‘Enough.’” #dnc #demconvention pic.twitter.com/XHfwKDToJM

The episode of which Bowser spoke happened in June, when nationwide riots were reaching their peak, devastating communities and terrorizing major cities across the country just days after George Floyd’s death in Minneapolis police custody.

Following days of severe civil unrest sweeping the nation, President Donald Trump gave a prime-time address from the White House Rose Garden to declare the administration’s pledge to restore law and order. This was followed by a short walk across the street to the historic St. John’s Church which the so-called peaceful protesters had burned the night before.

As Trump made his way across the street, demonstrators hurling projectiles at law enforcement officers were removed from the president’s vicinity, after 150 officers were injured including several hospitalized with concussions. While Democrats and allies in legacy media charged law enforcement with deploying tear gas to remove a crowd singing “Kum ba yah” in front of the White House, the Park Police later released a statement debunking the left’s narrative and confirming that “no tear gas was used.”

“At approximately 6:33 pm, violent protestors on H Street NW began throwing projectiles including bricks, frozen water bottles and caustic liquids,” United States Park Police acting Chief Gregory Monahan said. “As many of the protestors became more combative, continued to throw projectiles, and attempted to grab officers’ weapons, officers then employed the use of smoke canisters and pepper balls. No tear gas was used by USPP officers or other assisting law enforcement partners to close the area at Lafayette Park.”

Later on CBS, Attorney General William Barr offered an account of the events, contradicting what was reported from the media, exhaustively sympathetic to the rioting.

There were three warnings given. But let’s get back to why we took that action. On Friday, Saturday, and Sunday, OK, there were violent riots in Lafayette Park, where the Park Police were under constant attack at the, behind the bike rack fences. On Sunday, things reached a crescendo. The officers were pummeled with bricks, crowbars were used to pry up the pavers at the park, and they were hurled at police. There were fires set in not only St. John’s Church, but a historic building at Lafayette was burned down.

Historic St. John’s Church, near the White House, is on fire.

The church was built in 1816. Starting with James Madison, every president has attended services at St. James. pic.twitter.com/3gCBGyyx51

Is Peace at Hand in the Middle East?