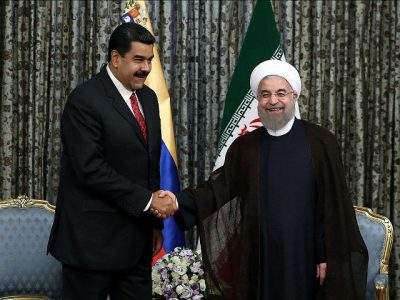 The alliance between Venezuela and Iran seems to be taking new directions. The ties between the two countries began to strengthen in an economic sphere when, in the first half of 2020, Tehran started sending oil ships to Venezuela, circumventing the international trade rules imposed by Washington with the aim of blocking Caracas economically. Earlier this year, Tehran sent several cargoes of gasoline to Venezuela to help the South American country overcome fuel shortages, as well as equipment to help state oil company PDVSA overcome production and export difficulties during the crisis.

The presence of Iranian ships on the Venezuelan coast has been a real affront to the United States, which has always played a role of naval hegemony in the Caribbean. Recently, the United States claimed to have seized four ships carrying Iranian gasoline en route to Venezuela, prompting Washington to tighten sanctions on both countries. But the US was unable to contain the Iranian advance and now the alliance between Caracas and Tehran has advanced into a military step.

Recently, Venezuelan President Nicolás Maduro thanked Iran for helping the South American country overcome US sanctions on its oil industry. At the time, he said that Iran is helping to maintain all Venezuelan national governance but did not elaborate on how this cooperation was taking place. He said it was important to maintain secrecy on the topic because of the economic boycott imposed by the US – which he called a “brutal war”. However, Colombian President Iván Duque said last week that Maduro was interested in buying missiles from Iran, which Venezuelan officials denied, but later Maduro responded that Duke’s statement was a “good idea” and that he had not yet considered it.

Shortly thereafter, Maduro confirmed his interest in buying Iranian weapons. According to the Venezuelan president, Iran, possessing advanced military technology, can be a great partner of the South American country in case of possible attacks by the US. According to Maduro, buying Iranian missiles was not in his plans until the moment that Iván Duque gave him this idea by accusing him in a condemning tone of being acquiring such equipment.

“With Iran having tremendous military technology, buying short, medium and long-range rockets and missiles from Iran to defend against imperialist threats seemed like a good idea, [so] I gave the order to Defense Minister Vladimir Padrino to evaluate all potentialities and possibilities, and if it is possible and convenient, we will buy these missiles at the right time”, said Maduro in an interview with the state television channel” Venezolana de Televisión”.

According to the Venezuelan president, the Duke’s pronouncement was intended to attack Venezuela to take international attention away from Colombia’s national problems, such as the massacres and murders perpetrated by drug trafficking militias and the great social crisis generated by the new coronavirus, however, it ended up arousing interest the Venezuelan government to buy such Iranian missiles.

Now, it seems that the possibility of buying Iranian missiles is being evaluated by Vladimir Padrino, leader of the Venezuelan Defense, and there is a great tendency for the negotiations to be concluded, considering that there is a willingness on both sides for international cooperation since they have a common enemy. Looking at the case from a realistic point of view, it is very unlikely that negotiations between Iran and Venezuela started due to Iván Duque’s pronouncement. Both countries were probably already discreetly maintaining this dialogue and the accusatory and condemnatory pronouncement served only as an opportunity to make the news public. In fact, it seems that Duque’s words were a flawed blow: Venezuela was expected to deny the accusations and thus create a scenario of tensions and uncertainties, but, contrary to what was predicted by the Colombia-US coalition, Venezuela has made public its intention to acquire the missiles and now the alliance is almost official.

If the missiles are bought by Caracas, this will be a major blow to the American presence in South America and, at the same time, a major milestone for Iranian international projections. The most important thing to note is that this agreement has a much deeper dimension than mere military trade: everything indicates that it will only be the first step in a major military alliance. Venezuela will have its defense system strengthened and will guarantee greater security against possible attacks by both Americans and Colombians. Likewise, in a possible war against Washington, Iran will have the definitive support of Venezuela – a strategically well located ally, with its coastline pointing to the Caribbean Sea, an important area of ​​American influence.

Rep. Ken Buck On Big Tech: There’s Too Much Power In The Hands Of A Few People