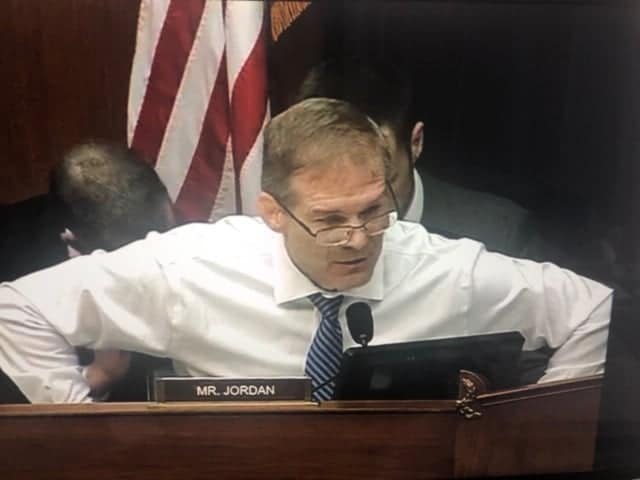 The Office of the Director of National Intelligence (ODNI) recently declassified a November 2020 opinion memo raising concerns about the FBI’s “apparent widespread violations” of the Foreign Intelligence Surveillance Act (FISA) and House Judiciary Ranking Member Jim Jordan (R-OH) and Rep. Andy Biggs (R-AZ) are demanding that FBI Director Chris Wray answer to the opinion. The two lawmakers sent a letter Tuesday, which also asked Wray how he is reforming the FBI to ensure the process is being used in a constitutional manner.

In their letter, Jordan and Biggs note that the ODNI’s memo highlights the misuse of FISA’s Section 702, which states that the government can permit the surveillance of foreigners outside the U.S. for national security purposes, to spy on American citizens.

The two Republican lawmakers also cite Department of Justice Inspector General Michael Horowitz’s December 2019 report showing abuse of the FISA process to illegally spy on members of the Trump campaign. The report revealed 17 “errors and omissions” and 51 incorrect points used as a basis for the surveillance.

Wray previously said the FISA warrant obtained against former Trump campaign aide Carter Page wasn’t justified and he’s promised to reform the system, but Jordan and Biggs aren’t convinced that anything has changed.

The FBI declined to comment on the letter, in an email to this reporter.

The Republican Congressmen ask Wray to provide the following:

“The recently released FISC opinion only raises more questions about the FBI’s respect for the constitutional and statutory parameters of FISA. Given the seriousness of this matter for civil liberties, please provide the following information immediately:

1. Please explain why almost a year after the OIG’s report about FISA abuses, the FISC found the FBI to still be abusing its warrantless surveillance authority under section 702.

2. Please provide a detailed accounting of every instance since December 2019 in which the FBI has queried, accessed, otherwise used information obtained pursuant to section 702 for purposes unrelated to national security.

3. Please explain what actions you have taken in the wake of the FISC’s November 2020 memorandum opinion and order to prevent the FBI from using its section 702 authorities to surveil, investigate, or otherwise examine U.S. citizens.”