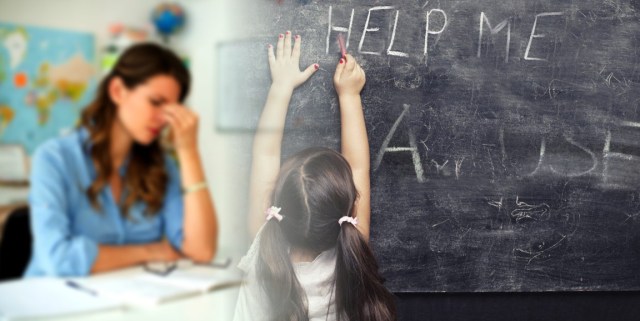 I’m sure you’ve heard this (African) saying “It Takes a Village to Raise a Child.” I guess you understand the meaning of it. But today, I’m going to tell you how it takes the cooperation of a village — a community — to destroy a child.

So, let me tell you a story — an absolutely true story — about a girl in South Australia.

It was one Friday afternoon early in 2018 when this young girl went to her teacher. I don’t know the details of how this young lass approached her teacher; or whether this was in lunch break or not, nor do I know for how long they spoke. But I do know the teacher called the Crisis Care line and reported what the child had said to her. She was obligated to do so — as she was a mandatory reporter after all (and there is a $10,000 fine for any mandatory reporter failing to report when a child is in need of protection).

In the notification to Crisis Care, the teacher disclosed that the child told her how her father had injured her a month before. The child showed her the one-month-old scar that had somewhat healed by that time. And the young lass went on to describe other abuses, and what had been inserted inside her too. As the report noted: the child made clear and specific disclosures and was very afraid of going home with her father that afternoon. It was a brave cry for help.

So after the school bell rang, the principal was in a dilemma. Both parents were there. On the one hand, she had child protective services advising her to send the child back with the mother, and on the other side a female police officer who was communicating with the father. The officer insisted that the principal follow court visitation orders and send the child back with the father for the weekend.

The principal sent the child with her father, but later that evening child protection staff returned the young lass back to her mother’s care. I presume they had considered the extreme nature of the teacher’s notification earlier that day (which I’ve read), and the doctor’s notification two weeks before.

So what happened to the teacher?

The teacher was provided counseling. The Department of Education looks after its staff members, and as this teacher was obviously much disturbed over having to listen to the traumatic experiences described to her by this young girl, counseling sessions were provided for the teacher.

So what happened to the child?

As for the child, she was later PUNISHED for courageously speaking out — and taken from her mother. Considering what the doctor had reported two weeks before, this child should NEVER have been removed from her protective mum.

As the “It Was Me” campaign so clearly points out: “… A child has very little to gain and a lot to lose by coming forward about being sexually abused.” 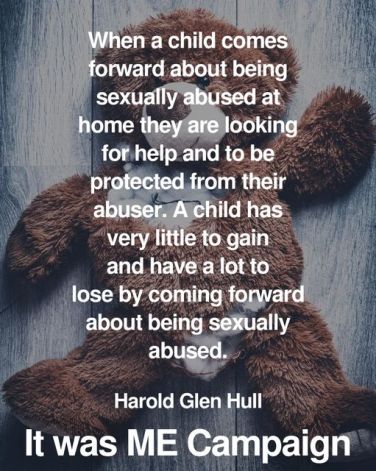 But, before I continue, let me provide a little background. This young girl had been speaking out for several years to her grandmother, to an excellent CPS investigator, to several doctors, and to her psychologist — who all believed her.

A few months earlier, in 2017, she had even been interviewed for over an hour by a police officer — the same female officer mentioned above. That interview should have been the turning point of her life towards a bright future, but it was not. And as no one listened or took action, the child must have gone to her teacher as a last-ditch effort in her cry for help. But her bravery came to naught.

It was not long after talking to her teacher that Friday afternoon, the Department for Child Protection (DCP) swooped in and removed her from the love and protection of her mother.

It was noted in family court documents that the child’s greatest fear was to be removed from her mother. And this child LOST the very person she loved most in the world. I have seen the “family map” she drew for her psychologist in 2016 that said so clearly … the one (and only) person she loves most in all the world is her mum. One of her 2018 notes says “…I love you a billion times over mum.”

How did this go so wrong? Soon after the mother had been awarded sole custody via Family Court, the child was injured. It seems the female officer was put there to prevent the child’s disclosures from being heard and to deflect any new investigation. There must be a handbook with these deflections, as I have seen this pattern over and over again.

Once the child was in government care, the DCP then began planning on reunifying the child with her abuser. Did they not consider the terrible accounts of the child, told in private to the officer, the two doctors, and the teacher? My mind cannot conceive this as possible.

Shame on those soulless people that concocted these fabrications to convict the child to a life without her wonderful mother. To quote some of her supporting affidavits… “She provides her daughter with everything a happy healthy child requires, love stability and protection” and “she’s a glowing and wonderful mother to [name]…” and “she’s a fantastic mother…” on and on.

The DCP is now plotting to take ‘ownership’ of this child until she is an adult (i.e., guardianship until 18 ). She will never again be allowed to be kissed or hugged good night by the person she loves most in the world.

It is more than diabolical. I cannot find dark enough words to describe what is happening.

A Life Sentence in the Australian “Gulag”

What do I mean by “life sentence”?

Sir James Munby explained it quite well in Re J (A Child) [2013] EWHC 2694 (Fam). He realized that the wrongful separation of a child from a loving mother can have devastating lifelong consequences. Sir Munby explained that this was not dissimilar to a life sentence, and wrote in his judgment (point 28):

“I have said this many times in the past but it must never be forgotten that, with the state’s abandonment of the right to impose capital sentences, orders of the kind which family judges [and Children’s Court judges] are typically invited to make in public law proceedings are amongst the most drastic that any judge in any jurisdiction is ever empowered to make. When a family judge makes a placement order or an adoption order in relation to a twenty-year-old mother’s baby, the mother will have to live with the consequences of that decision for what may be upwards of 60 or even 70 years, and the baby for what may be upwards of 80 or even 90 years. We must be vigilant to guard against the risks.”

Sir Munby was referring to a baby — but I suggest that if this happens to a six or an eight-year-old child who is established in her life and love with her loving mother, this becomes a form of the most extreme abuse — a punishment equivalent to or worse than prison. We know from the research it is a catastrophe, and that many of these children develop huge social problems in later life that can essentially be life-destroying.

It’s clear that mum and daughter were blossoming when living alone the two years before she was removed. To reflect on those many affidavits; the mum is “…an amazing mother… Their bond is incredibly close… [they have] moved forward in leaps and bounds…”  She is “a wonderful mother and has and will always put her daughter’s priority first and foremost.” Some are saying the mother needs help now? What, to learn how to keep silent? What do you expect might happen to you if you took cubs from tiger mother?

What Happened To Everyone?

But let me go the “the community” … the principal, the police officer, the social workers, the chief executives, the detective, the police commissioner, the psychologist, the child lawyers, the ministers, and the courts. All were meant to be there to protect the child — but they worked in concert to punish the child and sentence her to a life without her mother.

I have written much about this police officer. In June 2019, in an article entitled, “Removal of Child from Good Mum Traceable to Corrupt Female Police Officer” I began to piece the puzzle together. The puzzle has now been solved, and yes, in 2017 this female officer did interview the child and hear about her terrible sexual abuse experiences; and yes, she did add false notes in her report and do nothing; and yes, she did deliberately misdirect the second investigation a few months later; and yes, she did make fabrications in her police entries throughout 2018 saying that the child had made “nil disclosures.”

It was the most terrible lie that would be the key to destroy not only the child’s credibility — but the mother’s.

So what happened to the Officer? She was promoted.

I know many others in the “community” played their part against the child. An investigating detective lied to the mum in early 2019 saying that the child did not disclose any abuse in her police interview. The Chief Inspector charged with the re-investigation said much the same. The Police Commissioner became involved because the mother voiced in court that the officer had not fulfilled her duties. When I urged the new Minister of Police to assist, I was told that there was “no new information,” and so I questioned the minister’s police liaison, “Are you telling me the police knew all along that the officer had fabricated her police entries?”

And then there are all the social workers, the head of the DCP branch, the Chief Executive, and the Minister for Child Protection. They too have all played their part, and are determined to keep the child in their possession until the child turns 18.

And there’s the psychologist that provided a misleading report advocating the separation because she had not been provided the notifications, and let’s not forget the child’s legal representation. An axe murderer would get better representation. The child made “her” solicitor promise to tell the judge that she just wants to go home to her mum. The solicitor did, but then said to the court that they are for permanent separation. Imagine if the child knew what they were doing. (I will personally tell her one day) And as I said: a murderer would get better representation than does this courageous child. This too is a pattern across all Australia — well documented in my 2018 survey.

Who are these people that believe this is the way? And it seems the children’s court is filled with people that have zero concepts of a loving child-mother bond. Listen to Judge Judy or to Sir James Munby. Most of all they do not want to listen or believe the children and will go out of their way to happily send these children — and this young girl — on to a life of perdition.

This is only one case of many in this fair land down under.

I can promise you, no “reasonable person” on knowing the facts would accept what has been done to this mother and child as anything but diabolical. I have been circumspect in my reporting. And as Sir James Munby wrote, (point 29) “We must have the humility to recognise –and to acknowledge – that public debate, and the jealous vigilance of an informed media, have an important role to play in exposing past miscarriages of justice and in preventing possible future miscarriages of justice.”

If this makes you angry — please send this to your local journalist; to your local minister; share it and donate here if possible.

LETTER PATENT of VICTORIA ~ establishing the Office of Governor.