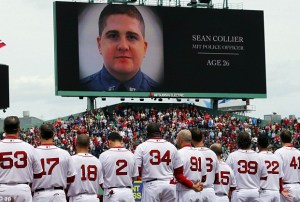 There is a 2019 book called The Marathon Bombing:  Running for Their Lives, by Blake HOENA, published by Capstone Press.  I have only read it today and found a few bits I had never heard, such as that Officer Sean Collier received five gunshot wounds. I am going to write to the Middlesex County DA, Marian Ryan and ask her to investigate the death, which occurred just 8 years ago on April 18, 2013, three days after the Marathon bombing.

The story provided at the trial of Jahar Tsarnaev is that Jahar, age 19, and his brother Tamerlan, age 26, were of a mind to skip town as fugitives from justice, so they went over to MIT to steal a gun.

Seriously did you fall for that nonsense? The campus of MIT is quite formidable, believe me. It is huge. The very idea of the brothers going somewhere to obtain a weapon is absurd, as they already had – according to the official story — a gun and a pipe bomb.  And maybe some shoulder-held missiles, after all they are MUSLIMS.

At Jahar’s trial, it was said that there were two “witnesses” to Collier’s murder. A student, Nathan Harman, riding his bike after study in the Math building, after 10pm, “saw” Jahar leaning into the cruise car of Sean Collier. That’s the extent of his marvelous witness testimony.  The other witness, Dun Meng, testified, equally marvelously, that when Tamerlan carjacked him, Tamerlan volunteered the information – as no criminal on the lam would do – that he had killed a cop at MIT.

Thanks to my recent little victory of finding the CNN transcript of the “naked-man Tamerlan video,” I have sorted out the Laurel St shootout between two gunmen and cops. I know confidently that the Tsarnaevs were not present at the Laurel St shootout. The famous Ruger gun, supposedly borrowed by Jahar from a friend by Jahar, was found it that scene, so I am guessing it was planted there.

A best buddy of Jahar, Stephen Silva, poor thing, gave “testimony” at the trial about having lent his Ruger to Jahar. I ask you: if cops were leaning on you (or on your mother or your child) would you cave in and give false testimony?  I think I would. Ratting on Jahar got Silva immunity from drug-sale crime.

So really we have no candidates for the role of murderer of Sean Collier that night. Even the bike-riding Nathan Harman did not hear gunshots.  And the supervisor of campus police rode past, Sgt Henniger, was making his rounds at the alleged moment of Sean’s death, 10:24pm, without seeing or hearing any trouble.

Makes ya wunda, doesn’t it?  Oh, and that afternoon, hours before the killing, the MIT campus was supposedly swarming with FBI.  No explanation given. Fine I’ll go with my imagination.

Doesn’t Sean deserve to have his real killer named?  Is it some sort of “honor” that he died in connection with the Marathon bombing?  I mean in the mythological story?  And would Sean really want the Red Sox to worship him as a hero for – supposedly – just sitting in his cruise car and taking five bullets?  Would he be pleased to know that a fellow 26-year-old, Tamerlan, or the 19 year old apprentice killer (I’m kidding) got wrongly blamed? I don’t think so.

Ah, I’ve just looked up the address of DA Ryan. Her website says “The true essence of what we do is to protect and serve.”  Excellent.  Also, she has just appointed a Director of Racial Justice Initiatives, Ms Antonia Soares Thompson.  I will point out that the racial slurs against the Tsarnaevs never stop.

Back to the book by Blake Hoena, who “has written more than 100 books for children.” This one is mostly a story of the Marathon event itself, a pleasant read.  The race begins outside Boston in Hopkinton, Massachusetts. It is 26.2 miles long.  Houena says over 1,000 uniformed police were instructed to mingle with the crowd.

Among the surprises as to who’s who among the runners: William Evans wasn’t simply the police chief that day, he’s a runner, having done 18 Boston Marathons.  He finished this one in 3 hours 20 minutes, then went to the Athletic Club and was in a hot tub when informed of the blast on Boylston St.  Evans had to return to the scene and did not get to bed till 10pm the next night.

Another surprise (to me) was that a pediatrician from Boston Children’s Hospital, Dr Natalie Stavas, ran the Marathon, coming to the finish line just around the time of the bombing and so was able to administer CPR resuscitation to Lingzi Lu, who nevertheless died. Dr Stavas mentioned that she was told by police to leave the premises as there might still be more bombs.

The manager of the race, David McGillivray, organized the whole route, the cement block barriers against car traffic, the porto-potties, and the delivering to the finish line of all the little bags which the runners had yielded up at Hopkinton, with their cell phone, money, etc.

McGillivray could not allow all 30,000 runners to start off together, so he lets the wheelchair ones go first, then the bike-bound, then the Elite Women at 9.32am and the Elite Men at 10:00am.  You always expect an African to win the Elites.  In 2013 it was a girl from Kenya and a guy from Ethiopia.

Another surprise.  Thomas Menino had already been mayor of Boston for 18 years before the bombing. On the day, he was in hospital following surgery on his leg. His son, a cop, was stationed at the finish line.

And I had not known that the president got into the act at 6pm that day, April 15, 2013.  That is to say, Obama went on TV.  He announced ‘We still do not know who did this or why.”  (He should have phoned me in Adelaide.  I knew immediately.)

Obama promised that “Any responsible individuals, any responsible groups will feel the full weight of justice.”  Yes, good. It’s taking some time. But whenever I get into a taxi in Boston the drivers seem to be aware. Won’t be long now.

One more thing from the 2019 Hoena book. As you may have heard, the double amputee Jeff Bauman, when in the ambulance, tried to tell the paramedic that he thought he had spotted the bomber. (That much is in Bauman’s book, Stronger.) But now we learn from page 67 of The Boston Marathon Bombing: Running for Their Lives.

“Just two days after Bauman nearly lost his life, an FBI sketch artist walked into his [hospital] room. Over the next couple of hours, Bauman did his best to describe the suspicious figure he had seen at the Marathon. To his surprise, the artist’s final result was an incredible likeness of the man he remembered.”

GLOBAL COVID FRAUD! Evidence that all the data is 100% false

Have You Taken your Oath of Allegiance to the Correct Monarch ~ Your Honour~???