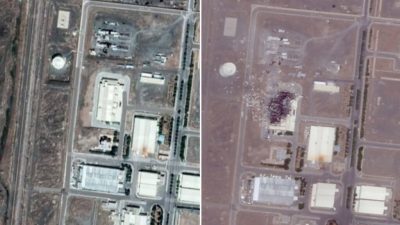 Last week’s cyberattack on an Iranian nuclear facility, reportedly by Israeli intelligence, is the latest gambit from the coalition of Israeli leaders, Christian fundamentalists, and hawkish Washington neocons who want to block a US return to the Iran nuclear agreement. If they’re successful, millions of ordinary Iranians suffering under draconian sanctions will pay the price.

Just as talks between the United States and Iran were taking place last week in Vienna, a cyberattack was carried out on Iran’s Natanz nuclear facility. Reports are that the Mossad, Israel’s intelligence agency, was behind the attack that blacked out the facility just one day after Tehran launched new advanced uranium enrichment centrifuges, and as US Secretary of Defense Lloyd Austin was in Israel speaking about the United States’ “enduring and ironclad” commitment to the Jewish state.

This is the latest in a series of Israeli attacks on Iran designed to scuttle negotiations. Last summer, a number of explosions attributed to Israel broke out across Iran, including a fire at the Natanz site. These took place while US elections were in full swing and Biden was promising that if elected, he would return the United States to the 2015 Iran nuclear deal (formally known as the Joint Comprehensive Plan of Action or JCPOA) that Trump withdrew from in 2018. In November 2020, Israeli operatives assassinated Mohsen Fakhrizadeh, Iran’s top nuclear scientist in the city of Absard outside Tehran. Had Iran responded, the United States might have been dragged into an all-out war.

Israeli officials have also directly lobbied the US Congress to quash the deal. In 2015, Netanyahu traveled to Washington, DC in 2015 to address a joint session of Congress in an attempt to uncut Obama’s original negotiations. This time, Mossad chief Yossi Cohen will be traveling to Washington to meet with top White House and US intelligence officials, and he hopes with Biden directly, to convince the administration that Iran has been concealing details about its nuclear program and therefore can’t be trusted. This is indeed ironic coming from a country that, unlike Iran, actually has nuclear weapons and refuses to disclose any information about its program.

Like Israel, the powerful US lobby American Israel Public Affairs Committee (AIPAC) is trying to convince Biden not to go back into the JCPOA. Last month, they organized bipartisan letters in the House and Senate, urging the Biden administration to insist on an expanded deal that included missiles, human rights, and Iran’s activities in the region. Since Tehran has been clear that an expanded or amended deal is a nonstarter, such “advice” was an attempt to quash talks.

The neoconservative think tank Foundation for the Defense of Democracies (FDD), which worked inside the Trump administration during and after Trump pulled out of the JCPOA, has been relentlessly pushing for war with Iran. After the United States recklessly assassinated Iran’s top general, Qassem Soleimani, FDD CEO Mark Dubowitz gloated, tweeting that the death of Soleimani was “more consequential than the killing of [Osama] #BinLaden”; and on April 11, the same day as the Natanz blackout, former CIA officer and FDD fellow Reuel Marc Gerecht, speaking on CNN, voiced disappointment that Trump hadn’t taken the United States and Iran into an all-out war.

Another group against a deal with Iran is Christians United for Israel (CUFI), one of the most powerful pro-Israel voices in the United States. In March 2021, CUFI urged the Senate not to confirm Colin Kahl for a top policy position at the Pentagon, claiming, “Kahl is a serial Iran appeaser” who “helped advance the disastrous Iran nuclear accord.” In response to the blackout at Natanz, they cheered Netanyahu, tweeting “‘Battling Iran is a colossal mission,’ Netanyahu says following blackout at Iranian nuclear plant.”

The People’s Mujahedin of Iran, or MEK, which the United States had previously designated as a terrorist organization and is known for assassinations and bombings it has carried out, is virulently opposed to US-Iran diplomacy. In March 2021, a number of US Senators attended a virtual event organized by the MEK-aligned Organization of Iranian American Communities (OIAC) calling for continued US sanctions and “bringing down the regime.” Senator Bob Menendez, the powerful chair of the Senate Foreign Relations Committee, was among several Democrats in attendance.

The opponents of the Iran deal are trying to keep in place the draconian wall of sanctions that the Trump administration imposed precisely to make it more difficult for a future US administration to rejoin the JCPOA. But these sanctions are causing immense suffering for ordinary Iranians, including runaway inflation and skyrocketing food and medicine prices. According to the UN, they contributed to the government’s “inadequate and opaque” response to the COVID-19 pandemic that has hit Iran particularly hard.

While “successful” in inflicting harm on the Iranian people, the sanctions have failed to broaden the terms of the talks, led the nation to increase its uranium enrichment, negatively impacted the human rights situation, and put the United States and Iran on the brink of an all-out war on multiple occasions.

That’s why so many people in Iran, and those who care about them, have been encouraged by this new round of diplomatic engagement. But Israel, AIPAC, CUFI, FDD, MEK, Menendez, and the like are probably instead hoping that Iran carries out the revenge that Iranian officials have called for in response to the Natanz blackout. But as the saboteurs of diplomacy hope for a violent escalation, let’s keep in mind — and hope Iran agrees — that the best revenge would be a revived JCPOA.

This article was originally published on Jacobin.

Medea Benjamin is cofounder of CODEPINK for Peace, and author of several books, including Inside Iran: The Real History of the Islamic Republic of Iran.

Ariel Gold is the national co-director and Senior Middle East Policy Analyst with CODEPINK for Peace. 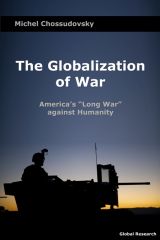 The Globalization of War: America’s “Long War” against Humanity

The “globalization of war” is a hegemonic project. Major military and covert intelligence operations are being undertaken simultaneously in the Middle East, Eastern Europe, sub-Saharan Africa, Central Asia and the Far East. The U.S. military agenda combines both major theater operations as well as covert actions geared towards destabilizing sovereign states.

Marketing Strategy: Why Is It Important for Your Business Growth?