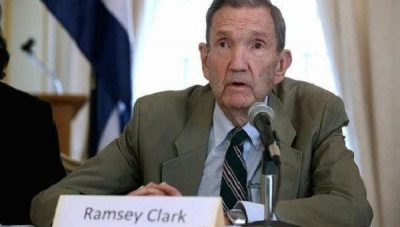 Former U.S. Attorney General Ramsey Clark delivers an address on the threat of war in the Asia-Pacific at the Foreign Correspondents’ Club of Japan on August 1, 2013.

The speech is part of a series of events held in Pyongyang, Seoul and Tokyo around the 60th anniversary of the signing of the Korean War armistice agreement on July 27, 1953.

Donald Trump Calls In to Gettysburg Hearing: We Have to Overturn Election Because Democrats Cheated